Per Aspera Review – Getting Stuck So Often Never Felt So Good

It’s been a long time since I’ve gotten into a strategy game story as much as the one in Per Aspera. And that makes sense, right? Who plays strategy games for the story? A lot of games have a narrative raison d’etre or a story campaign. Per Aspera has a well-written well-performed choice-driven story at the core of it. One that made me laugh at times, and forlornly look out a rainy window. I stared at the ceiling and contemplated my own existence. That’s really something! And all of that is wrapped in a challenging base-building game. Truly Per Aspera is blazing its own trail through the stars.

You’ve played base building games, right? You may even have played the ever-growing subgenre of Martian-colony-and-terraforming games. Per Aspera is one of those. First you build an aluminum mine. Then you build a silicon mine. Next you are building a factory that produces glass. Before too long you have delicate and winding production trees to extract resources and to process them into other resources.

Next comes colonization. People land, you keep ’em fed. They mostly handle research, to help you build better stuff. All of this is in support of big projects that hope to turn the red planet green. You’ll heat it up, capture gases to build an atmosphere, maintain the air pressure, and start filling dusty craters with water. If you’ve played Surviving Mars or Terraforming Mars, you know the gist. 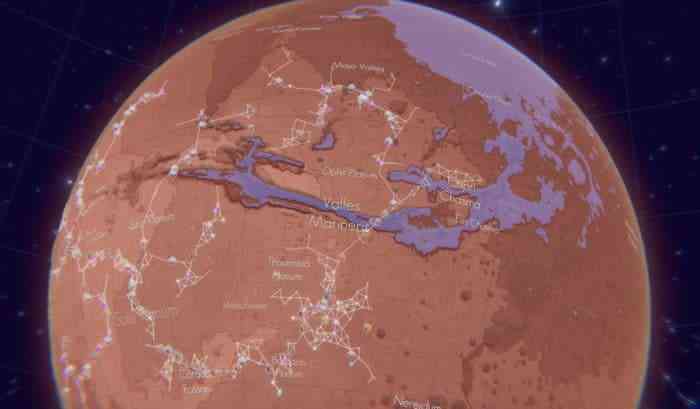 And Per Aspera is no slouch when it comes to those common sorts of things. It’s aided by a wonderfully minimalist design aesthetic that renders mars as a simple topographical map. As you zoom out, the map gets even more sparse, highlighting the winding roads and lights of your buildings as you look down from space. Big moments (like melting the polar ice caps) aren’t animated in a lot of detail, but arrive with a lot of impact. It turns out that a really thoughtful art style can actually do a lot of narrative lifting. Who would have imagined that (aside from generations of comic book artists and cartoonists)?

I knew from the moment I started the Per Aspera campaign it wasn’t going to be just another base building game. That’s because it had opening credits. Though brief, this presents the story like a movie or TV show. You see Laila Berzins’ name. Then Troy Baker. Then Phil Lamarr. If you are into this sort of thing, you realize this is the voice cast. And those are some heavy hitters. It’s the first clue that the story is going to be taken seriously.

In Per Aspera you play as AMI, an artificial intelligence voiced by Laila Berzins. AMI has struggles that are familiar in these sorts of stories, but damn if it isn’t well written and performed. She spends a lot of her time alone, contemplating her existence, asking questions like: is her satellite her body? Or is every drone on Mars a part of her? Are her algorithms forcing her to plan a certain course of action, or is she motivated by abstract emotions like anxiety? While these questions are not totally original, the discussions are incredibly thoughtful and lively. 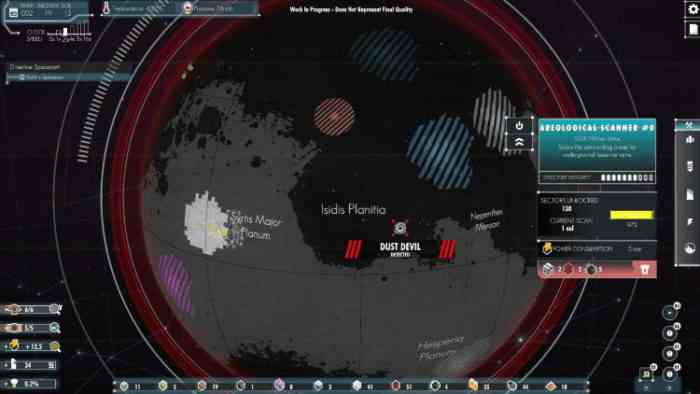 What takes that element of the game from mere window dressing to genuinely provocative stuff are the choices the game asks you to make. These choices aren’t going to totally alter your path in the game, but you’ll see them coming up again in profound little ways. Like early on, as AMI, I decided that I was feeling anxious. Later, she called back to that, trying to better master her emotions. On another playthrough, I took another option, and AMI was much more analytical when it came to problem solving.

Some of this plays out in an internal monologue, but the best parts of the the story are the conversations between AMI and Dr. Nathan Foster, played by Troy Baker. You probably know Baker from his man-of-action roles in games like… most games. He’s in a lot. But stuff like Bioshock: Infinite, Uncharted, and various DC games. I totally believed Baker as a nerdy, soulful scientist. His “ums” and “ers” hit the ear perfectly, and this game is quietly one of his all-time best vocal performances. He’s the standout in an otherwise stellar cast.

The combination of those things- the performances, the writing, and the choices- frame the RTS as something more. You are always playing these games as an invisible power making choices from the sky. This story cuts right through the usual ludonarrative dissonance. You see this way because you are a computer in a satellite. The user interface is just how the character chooses to perceive her situation. And all of it serves to tell a tale of burgeoning consciousness that hooked me as much as any RPG I’ve played in a year. Because you are playing the role of someone who is making strategic choices, the story and gameplay never feel disconnected.

This led me to fear that some of the magic would be lost in sandbox mode. This is partly true. You miss out on the dialogue (which is fair, that’s sort of the point of the sandbox) and the scripted events. But the freedom the game affords you offers a new challenge, and new opportunities. Most RTS games take place on a square plot of territory. Per Aspera puts you on a map of the entire planet, and lets you start anywhere.

There are no goals in this mode, so you can set your own. Did I immediately try to build a road right around the Martian equator? You bet I did! I also tried to build a colony that had buildings on the highest and lowest points of the planet. Sandbox mode has a nice slow rhythm to it, so it’s the perfect game for building and listening to a podcast. And considering how engrossing the story is, the fact that a game can be so good at both those things is high praise indeed.

I will fully admit to getting stuck in a few places. On a few tries, I overextended too quickly or didn’t adapt well to the changing planet. I always mismanage my electrical grid, or my maintenance bots, and build my way into a corner. But I keep coming back. Never before has a strategy game offered me such an involved story in such a staid sandbox. I think I’ll be turning Mars green for a long time to come.


Per Aspera’s Upcoming Expansion Will Involve a Lot of Water