Pendragon Review – The Excalibur of Board Games

Strategy games and RPGs are all about communication with the player. In those genres, statistics dictate success and failure. What is your strength? Your income? How do your choices impact the underlying numbers? Pendragon is ostensibly a strategy RPG. You have a party of characters, who move across a grid, moving slowly towards a confrontation with the Last Boss. But Pendragon deliberately obfuscates the ways your choices impact the story and in doing so, free you to enjoy one of the purest storytelling games I have ever encountered.

So Pendragon tells the story of the last days of King Arthur and his court. I’m a bit of an Arthur nerd, so I was immediately hooked. From the start you have access to two characters, Lancelot and Guinevere. The goal is always the same- meet Arthur on the field of Camlann where he is fated to do battle with his wicked son Mordred. The rules for getting there are somewhat opaque, but the story is always enticing.

You play Pendragon on a grid. As you move, you capture spaces, which allows you easier mobility. Moving diagonally captures more spaces, but makes you vulnerable to being attacked. Moving in straight lines means you can attack, but is much slower. There are a number of other rules but don’t even worry about them, the game certainly doesn’t. 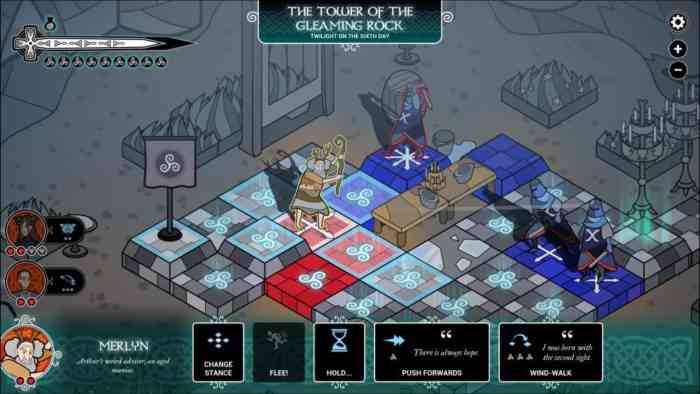 That’s because Pendragon isn’t a combat simulator; it’s a dynamic story creator. I’ll give you an example. I started a game as Lancelot. He’s a real sad guy, consumed with guilt for hooking up with his best friend’s wife (Arthur and Guinevere respectively). On his journey, he encountered Mathilde, a precocious young woman who wanted to escape an abusive stepfather. Lance agreed to let her tag along, and didn’t even pry as to what med Mathilde so eager to flee.

Soon, the pair found themselves in a village. Though Lance and Mathilde had blades, the villagers were brandishing crude tools in a threatening way. Good Sir Lancelot didn’t want to start a fight so, hand on his sword, he edged around the town trying to figure out if the people were loyal to Arthur or Mordred. Then, Mathilde found herself cornered. She had a choice: hold her ground and risk getting stabbed, or making the first move. I had her make the first move, stabbing the pitchfork-wielding farmer and getting to higher ground. It was over in seconds, Lancelot prepared to throw down but the rest of the villagers fled. I never found out how they felt about Mordred. 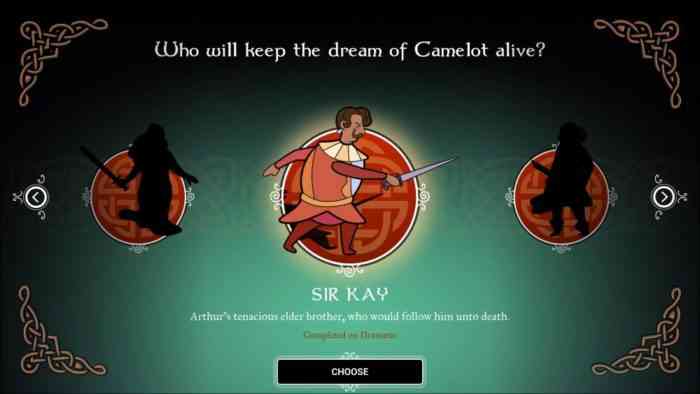 This is pretty common to how encounters play out in Pendragon. There are clearly tons of variables at play, but it is never exactly clear which ones are critical. What would have happened if Mathilde held her ground? Were the villagers scared of Lancelot’s mighty blade? Did they recognize him for who he was? Or were they simply cowards from the start, with no real fight in them? Spelling it out with stats would diminish it. The story is beautiful because it is beyond anyone’s control.

Because the gameplay is so abstract, everything comes down to presentation. Fortunately, this is a game from Inkle, the team behind 80 Days and Heaven’s Vault. The dev team is made up of five central figures but I give a lot of credit to Annie Wyatt, the team’s 2D artist. Her simple art eschews busy linework for simple, bold planes of color and even though Pendragon has a very different aesthetic from Heaven’s Vault the visual throughline is very clear. Characters in Pendragon look like simple paper dolls, but they are extremely expressive and their style serves to make the whole game experience dreamlike. I’ve noticed when I review my favorite comic books (which is my other gig), two words I tend to overuse are “whimsical” and “melancholy.” Those words totally apply to Pendragon which matches simple and appealing art with a rainy story of prophesied doom. 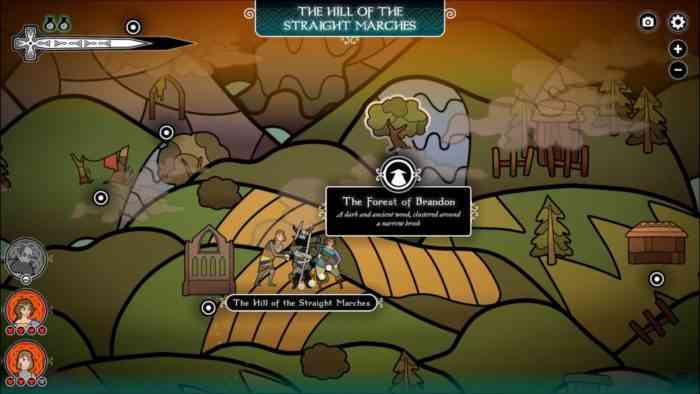 If you play it enough, you will certainly see dialogue repeated, or encounter a story thread you have played through before. I found I didn’t mind. More than anything else, it reminded me of one of my most played games as a kid: Starfox 64. There are moments of that story that repeat every time you play the game (“Do a barrel roll!”) but that doesn’t make the game feel thin. Instead, I loved exploring different pathways, learning secrets, seeing what would happen differently if I just changed this one thing.

The Battle of Camlann 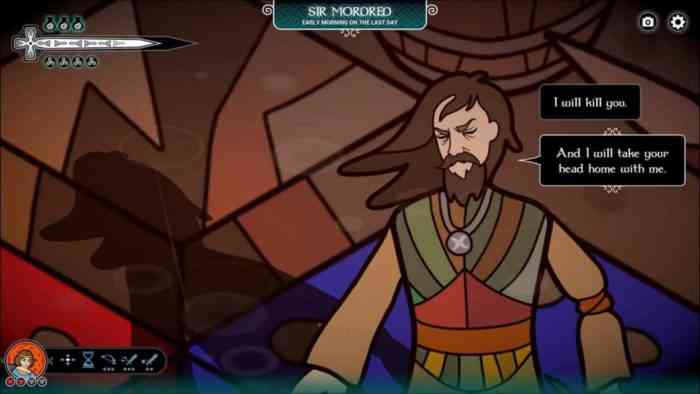 I’ve played Pendragon dozens of times. I’ve unlocked most of the characters (I still can’t see to get Branwen the archer to trust me) and I know there are stories I haven’t pursued to their conclusions (Excalibur is out there, and I will find it). So rather than a traditional RPG or strategy game, Pendragon plays like an impressionistic take on a classic Nintendo formula. You’ll tell your own stories and if you play them right, the dream of Camelot will live on.