When The Past Was Around Review – Cozy and Compelling

When The Past Was Around Review

Some games are fragile bird’s eggs: easily broken if handled poorly. Writing a review for these games can feel like picking those eggs up without gloves, just praying that you won’t drop them. When The Past Was Around, a point-and-click adventure game developed by Mojiken Studio, is one of these games, and I hope I can do the delicate nature of this title justice without cracking any shells.

When The Past Was Around follows Eda, a girl who wears her hair long and her pants high-waisted. The game explores her relationship with a mysterious owl man who is good at wearing dramatic shawls and playing the violin. Saying much more than that immediately gets into spoiler territory, but you unlock the missing details in your story through point-and-click puzzles, a gameplay mechanic as old as time—or at least computer games.

I would recommend playing this game in one sitting. It’s about an hour long, so that shouldn’t be hard. Of course, thanks to a cross-country drive, I ended up splitting it up into two sittings anyway, and while I found the story to be poignant and memorable, I think it would have landed at maximum potential if I’d been able to enjoy it as a cohesive piece. In that and many other ways, The Past Was Around feels more like a visual novel than a straightforward point-and-click adventure game.

If it’s anything like a visual novel, though, it’s one that invites you to take your time. Even though the game is short, it still feels like a full story is being told, and you’re always invited to enjoy yourself when you scroll around the screen. This is in no small part due to the visuals. The art style of When The Past Was Around is just gorgeous in a soft, friendly way. Eda seems like a girl who tweets about her growing collection of succulents and how she’s turning into a wine mom before her time, and honestly, I love that for her.

Every artist who worked on this project should be proud (although they don’t need me to tell them that). This game’s art immediately communicates a sense so specific I find myself Googling things like “synonym for cozy.” Even in the tense moments, I get a full sense of this comfortable and overall kind world that Eda and her owl man live in, and I’ve rarely seen something this style represented in games. It reminds me of one of my other favorite games, Eastshade, which is totally different in art style but also communicates a sense of peacefulness. Basically, all of this paragraph is a synonym for “I love this art so much” and maybe also “all I want to do in video games is vibe and look at pretty things.”

In keeping with the narrative, the point-and-click problems unfold like they belong in a slightly alternate reality to ours. A lock’s combination is solved with a sheet of music or you use nearby birds to get past a gate. This whimsy makes the off-kilter story more immersive, but this works both for and against it. Sometimes the solution to the puzzle is a cute idea that proves bizarre and frustrating in motion. These moments are brief, but they contribute to a general sense of confusion that sometimes happens at the most non-linear points in the story—and the story is pretty non-linear. 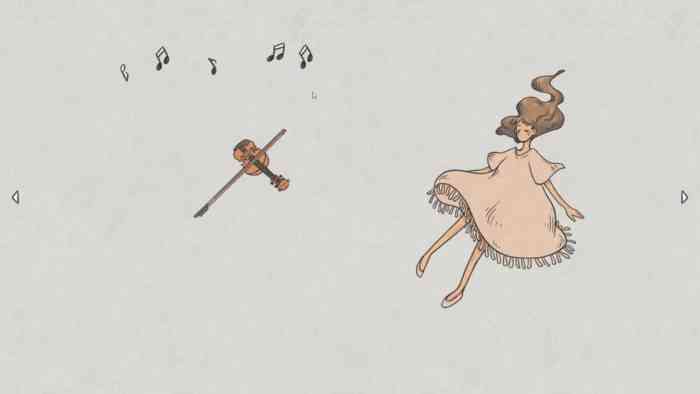 I found myself asking many times throughout: is this a metaphor? Is the owl man a metaphor? Is the violin a metaphor? Are the shadows a metaphor? At one point I threw a bunch of shit around the room, look around, and asked: is this a metaphor? And honestly, most of the time? The answer was yes. Most everything is either a metaphor or could be mistaken for one. But maybe that’s not a bad thing. I think the story could have been a little clearer in the beginning—it was sometimes hard to tell what was now and what was, well, before now—but it overall worked and did a good job of cutting straight to the heart with its emotions. I can easily forgive some minor missteps in story and puzzle arrangement because of how well the game works overall.

When The Past Was Around tells a story without uttering a single word of dialogue, using simple but beautiful music and a masterful, unique art style to communicate it. If I’m falling back on popular buzzwords too much when describing it, know that it deserves better. Better yet, make yourself a cup of tea, wrap yourself in a familiar blanket, and find out for yourself.

The Long Dark: Tales From the Far Territory Announces Release Date
Next Fire Emblem: Shadow Dragon & The Blade of Light Review – You’re Fired
Previous Unto The End Review – Trudging Through the Wilderness