Party Hard Review – Neighbours Keeping You Up? Go on a Murder Spree

It’s 3AM and you’re still awake because of that obnoxiously loud party happening next door. With only a few hours until you need to be up for work, you wish you could just go over there and kill everyone to get some peace and quiet. While no normal person would do so, Party Hard’s premise is exactly that. You’re going to stop the neighbour’s party by killing everyone.

Now don’t get me wrong, on paper is sounds incredibly violent, which in a way I guess it is since you are going to be stabbing people, but it’s actually done in a comical way that’s tongue in cheek, not taking itself too seriously. It’s a great idea for a game and regardless of how ethical the basis may be, it has a lot of charm to it and is full of laughs.

Your character is not only sick of the parties keeping him awake, but he’s got the idea in his head that it’s simply better to kill everyone rather than call the police. While your go-to weapon is your trusty knife, that’s an inefficient matter of killing since you’re only able to stab one party goer at a time. That’s why you’ll also make use of environmental devices and objects to eliminate the party much quicker, such as throwing people off the roof, into shark infested waters, poisoning the drinks, exploding speakers, and more.

Party Hard is a strategy game at its core and follows the killings of this serial killer all across the USA from coast to coast. What starts as a quaint house party slaughter eventually builds up to a roof party, pool party, part bus, and more. There is a narrative that accompanies the level progression but since the game is so short, beatable in a single sitting, I don’t want to spoil any of it, even though you’ll see the ending coming a mile away. It doesn’t help that the voice acting is absolutely atrocious and sounds like it’s done by an amateur, as it’s far more distracting, dull of acting, than telling a story.

Your main goal, aside from mass murder, is to not get caught, obviously. Anyone that sees you stab someone will instantly call the police to come and arrest you, so you need to play it cool and take your time when you’re going in for a one on one kill. Funny enough, you can use any of the environment kills, which are usually a one use only, and you’ll never be blade for them, even if you’re the only suspect standing beside the suspicious “accident”. There are usually dumpers, sewers, or rooftops that you can dispose of bodies (or even passed out drunk people) if you don’t want to leave a trail of corpses. As long as you blend in and don’t hang around a found body, you’ll be fine the majority of the time, allowing you stalk your next victim.

“Even though the soundtrack is upbeat (it is a party after all), the gameplay itself is generally quite slow, especially when you’ve exhausted all of the environmental tricks and need to stalk the last dozen or two partiers one by one.”

The game itself is easy to understand, and once you get a level or two in you’ll have no problems clearing stages, as long as your patient and wait for no witnesses to be nearby. Focus on not being seen, making it look like an accident, and you’ll get away with murder…literally. In a way, it’s almost a sandbox game, as you’re given the freedom to go about clearing the party out however you wish, but you’ll also need to be able to think on your feet and react quickly when needed, especially when you’ve been seen and the cops are after you. Speaking of, it’s pretty silly to see when the cops give up pursuit of you after a set amount of time, especially when you’re just feet away and they express “I’m too old for this sh*t” and give up their hunt.

Even though the soundtrack is upbeat (it is a party after all), the gameplay itself is generally quite slow, especially when you’ve exhausted all of the environmental tricks and need to stalk the last dozen or two partiers one by one. It’s all about divide and conquer, and sometimes you’ll need to show your dance moves to piss people off enough to leave the area their hanging out in so you can get your kill on. Using the environment kills in the beginning is quite fun, but it’s a shame there are so few in each stage and you have to resort to the less fun stalk-and-stab’s.

While the set levels have a set layout, it’s somewhat procedurally generated, meaning that on each attempt the rooms traps and other intractable objects will vary. Unfortunately it’s simply not enough, and the randomness can make things either very easy when you can shock and instantly kill half the party right away, or only have a handful single kill traps instead. This makes the last half of each level a daunting task of simply waiting for a victim to be alone for a few moments so you can do your thing. Luckily there’s a dedicated dance button for you to bust a move to the music while you wait. 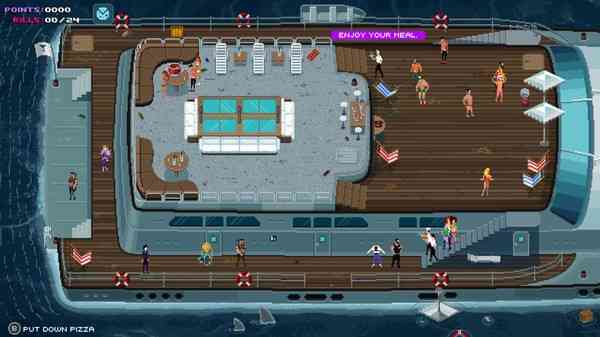 Sometimes in stages you’ll also find a briefcase that contains a power-up, such as a smoke grenade, dynamite, a change of clothes, or pizza among others. Some are more useful than others, as the dynamite is very powerful and will kill a large area of people, but then SWAT gets called in, making the latter half of the stage much more difficult. The costume change is handy when you’re trying to outrun chasing police, as you can instantly change clothes even in front of them and they’ll be none the wiser. They are fun to use and can help, but it seems completely random if they appear in the stage or not each attempt instead of a set spot to always appear.

While I really enjoyed the old school 8bit visual style, as that’s what attracted me to the game in the first place, there’s not enough variety of NPCs, as you’ll be killing at least a dozen of the exact same people in each party. The soundtrack is varied and each level has its own tone to it but it’s also on a loop and simply repeats itself no matter how long you take to kill the party. 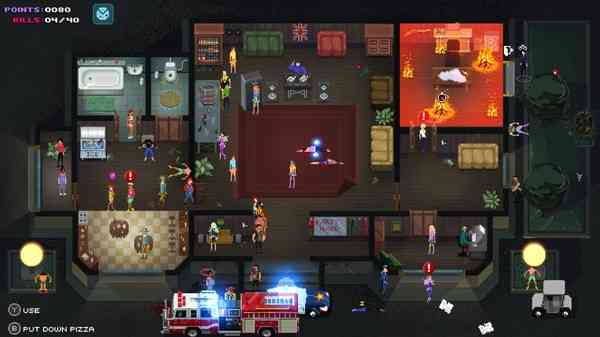 What surprised me the most though was the fantastic integration of Twitch. You’re able to link your game with your Twitch account and when you stream Party Hard, it can feel like a totally different game. Essentially, your Twitch chat can vote on one of three party goers or events to take place after a set voting time, such as a bear, body builder, carnival people, and more. Using the Twitch integration does make Party Hard substantially more difficult for a number of reasons:

There were numerous times that I encountered random bugs, needing a level reset when I was so close to completing a stage. One time an NPC got ‘stuck’ to me and mimicked my moments, but wasn’t near me, so it was impossible to get close to them to kill them. Another time I had the entire party stand still, unable to move, making clearing the party simple to kill, even with the SWAT not moving, but didn’t get the clearing credit for it.

Party Hard is a very simple and fun title, but it becomes quite repetitive after a while. The randomization of levels is supposed to help with that, but there’s simply not enough variety to keep it engaging for long periods of time. With a level editor or Workshop support, I could see this problem being alleviated quite quickly. That being said, for all of its shortcomings, it makes up for it in its great Twitch integration, gamepad support, personality, and with those bears that know how to use a phone and snitch on me.