Gauntlet is now available on PS4 with the release of the Slayer Edition. With it comes a few upgrades and changes to many sub-systems like in-game achievements, difficulty, and level selection. They’ve also added Endless mode, a never-ending descent through floor after floor of enemies with an online leaderboard to see who has ventured the furthest. Relics and potions have been overhauled too, with relics now on a cooldown and potions having their own separate ability. The Slayer Edition is a different beast, but is it better?

While the overhaul was mostly well-received, there was one change that irked me quite a bit. The in-game achievement system worked in the past by giving your hero passive bonuses as you progressed. Killing enough of each enemy would give you a damage bonus against them, eating lots of food would give you a bonus to how much life you gained from doing so, and so on. This worked great and gave a nice sense of progression aside from just finishing each level. With the Slayer Edition, the developers have chosen to make gold more important, which is great. However, because of this, those small achievement bonuses have instead turned into large sums of gold. It’s an odd trade off, and it just doesn’t feel as good. My character didn’t generally feel stronger, just different.

“The whole system feels better than it did before but is still a little bit half-baked, especially in comparison to their other title, Helldivers.”

Gold can now be spent on weapons that grant new abilities, relics which can be upgraded, potion abilities, and cosmetic armour pieces. While generally a nice improvement as gold wasn’t that useful before, Arrowhead has made some strange and possibly lazy decisions here. The whole system feels better than it did before, but is still a little bit half-baked, especially in comparison to their other title, Helldivers. Without the passive bonuses that were once granted, the weapons or armour would have been the perfect spot to spend gold on not only purchasing a new cosmetic piece but then upgrading it as well. Once you buy the vast number of purely cosmetic capes for sale, there isn’t much left to spend your gold on.
Due to this lack of growth, Gauntlet: Slayer Edition loses a fair amount of replay value. All of a sudden, killing ten thousand mummies didn’t matter as much, nor did going out of my way to destroy food when I didn’t need it. Upon completing the final boss fight there’s not much compulsion to go back and unlock everything, unless you’re a trophy hunter. Endless mode is new and provides an interesting challenge, but it still lacks depth now that gold is the only real reward. You can buy items at the start of each floor, but the selection is rather limited and no new items are presented. This would have been another great spot to throw in some sort of upgrade system, or risk vs. reward with chance boxes that could contain bonuses or curses.

“For twenty dollars you can expect at least four or five hours of fun, which is decent, but nothing extraordinary. If you have some friends to play this with or are a die-hard Gauntlet fan, it’s a good buy and worth a shot.”

One of the biggest changes visually has been the removal of the hub world and addition of the new level select system. Now instead of having a shop and some doors to enter, you’re presented with a beautiful map that details your journey nicely. It helps the game feel less linear by branching off in areas to give you side-levels instead of just moving down a line, and is a big improvement to the level progression overall. You now access the shop before each level starts, giving a constant reminder to spend that hard-earned treasure. Hub worlds have been welcome in Gauntlet for a long time, but the map has way more character than the old hub and is quite fitting with the rest of this version aesthetically. 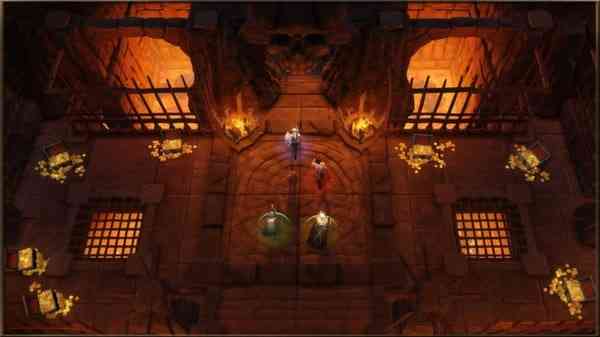 While the Slayer Edition may not be a huge time sink, it’s still a lot of fun and a great co-op experience. Playing through on Hard is going to be tough, and can require some actual strategy when you get to deadly rooms. The changes to potions and relics will also have you balancing your team appropriately and each hero feels like they really fit a role now. Each hero can actually have a sort of build due to the changes to weapon abilities as well, and there’s some good diversity here. For twenty dollars you can expect at least four or five hours of fun, which is decent, but nothing extraordinary. If you have some friends to play this with or are a die-hard Gauntlet fan, it’s a good buy and worth a shot.

Next Warlocks vs Shadows Review – Fun and Challenging But Sports a Mangled Online MP
Previous Party Hard Review – Neighbours Keeping You Up? Go on a Murder Spree