Corpse of Discovery Review – Compelling Concept, Execution Sucked into the Vacuum of Space

I was initially attracted to Corpse of Discovery because it looked like a survival horror title set in outerspace – for a horror junkie like myself, those are two factors that can almost guarantee an entertaining game. After playing through the first mission, I quickly realized this game is more about the concept and less about any actual gameplay.

You awake from hypersleep, your mind foggy as powerful chemicals used for deep space travel dissipate from your system. Strange photos of your family and drawings by your children litter the walls of the space station you now call home. You take a stroll, checking out the research lab and self-contained garden in your otherwise sterile abode – it would appear you’re alone here, the closest thing to company being a holographic message from your family back on Earth and a robot who seems to love reminding you of your responsibilities to the company. Receiving your exploration mission from your employer Corps of Discovery, you don your space suit and exit the air lock, unsure of what you’ll run into on this uninhabitable planet, whether you should trust the people who sent you here in the first place, or whether you’ll ever see your loving wife and children ever again…

This is the basic premise for Corpse of Discovery, a first-person exploration game developed Chip Sineni and published by Phosphor Games. Named after an actual branch of the U.S. military commissioned by Thomas Jefferson during the 1800s to decide how to best take advantage of the Louisana Purchase, this title plays like a space-twisted combination of Myst and Groundhog Day – the game begins with a live-action press conference regarding the lost contact between space exploration corporation Corps of Discovery and their latest deep space explorer. You initially start as a ruddy-cheeked, ready-for-anything Major in the Corps, confident in your position in the company and your role as a planetary explorer. Your constant companion, a floating robot named AVA, accompanies you on your missions, chiming in every now and then with passive-aggressive reminders of why you’re on this planet and who you work for. While things start off chipper, they quickly take a dark turn as you realize the company has no intention of bringing you back to Earth. Each time you complete a mission you mysteriously blackout and reawaken in your space station bedroom as if nothing happened, perplexed as to how and when you arrived there and increasingly more determined to somehow make it back to your family on Earth. As you explore the various planets you awaken on, all mysteriously named Tellurus yet vastly different, you occasionally run into spacial anomalies and strangely misplaced reminders of your life on Earth – this title has a deep philosophical vein to it, raising questions about the balance between ambition and family, the difference between human and artificial intelligence, and the cost of placing oneself at the disposal of a questionable authority.

“Corpse of Discovery is literally a ‘walking simulator’ – players walk or jetpack across each planet from point A to point B, avoiding obstacles and reaching mission objectives or strange cerebral reminders of their abandoned humanity.”

Unfortunately, this is about as far as this title goes as an entertaining game. True to the Steam store page notes, Corpse of Discovery is literally a “walking simulator” – players walk or jetpack across each planet from point A to point B, avoiding obstacles and reaching mission objectives or strange cerebral reminders of their abandoned humanity. While there are strange, Lovecraft-esque beings that stalk each planet, evidently searching for something or someone, the sense of danger is low as their AI is simple and it’s pretty easy to avoid them; the only real danger is misjudging a jump and falling into a chasm. Even the wildlife you occasionally run into, which AVA claims is dangerous and should be avoided, is static and will not damage you, even if you run up and harass them.

The optics of this title are equally underwhelming, with sloppily rendered textures and landscape features, a strange glaring quality to colors in some missions, and light effects that look primitive for the futuristic setting of the game. The audio plays a support role, with a minimally sufficient score for each planet; your compatriot AVA’s dialogue and the holomessages from your family are about as complex as the audio gets. To its credit the voice acting in this title is above par, with voice actors even providing good imitations of Chris Rock and Matthew McConaughey in a couple spots; unfortunately, the audio levels sometimes sound like they need serious adjusting, as sound effects are sometimes barely audible. Lastly, the controls are overly simple – you can walk around and jump (or double jump, but there’s no guidance to make you aware of this until you try), jetpack around in the levels that feature the pack, and statically interact with some objects, that’s it – no crouching, no running, no physically manipulating your environment in any way. 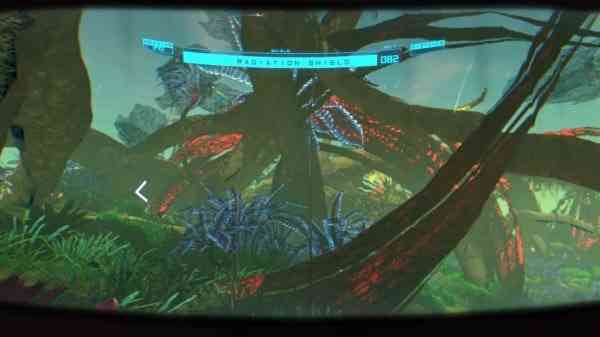 Finally, there are the bugs – with an environment draw rate that is so slow you can literally fall through the map because it hasn’t been created yet, and other issues involving ghosting through the terrain to an endless fall into nothing, the game has an unpolished and incomplete feel. It also hard crashed when I completed it, leaving me wondering if I had missed anything which might provide some feeling of closure to this long, strange trip of a game.

Corpse of Discovery is a big idea sporting the trappings of a little game – though a great concept with loads of philosophical waxings, the game mechanics and aesthetics just don’t match the heady, cerebral premise and subject matter. This title had some serious potential – what doesn’t sound intriguing about surviving on and exploring alien planets due to a corporate space exploration bungle, piecing together the mystery as to what happened and how to return to Earth along the way? Instead, Corpse of Discovery plays like an interactive novella that examines the subjects of family, duty, personal sacrifice and isolation, but falls short on delivering any true sense of survival or danger.

Next Party Hard Review – Neighbours Keeping You Up? Go on a Murder Spree
Previous Xeodrifter Review – Super Metroid Lite, Which Isn’t a Bad Thing at All