Xeodrifter Review – Super Metroid Lite, Which Isn’t a Bad Thing at All

When I was seven years old my dad took me to the local video game store and told me I could get any Super Nintendo game that I wanted for my birthday. My eyes scanned the wall of unopened games behind the counter and I was filled with an overwhelming sense of freedom. I could have any of these games? My eyes eventually narrowed on Super Metroid and I told my dad, that’s the one. I don’t remember why I picked it, but I’m glad I did. It was my first experience with a Metroid game, and being only seven years old I quickly realized that I was in way over my head. I got stuck fairly early on and had to step away from it. It would be a couple years before I truly appreciated Super Metroid as a masterpiece. Also, my dad was pissed that he bought me a game that I didn’t want to play anymore.

Xeodrifter, Renegade Kid’s newest title, would have been perfect for seven year old me. It strips away the aspects of Metroid that can be kind of frustrating and presents a distilled Metroid experience. Unfortunately, in that stripping away process, something is lost. So while Xeodrifter is good, it isn’t great.

The start of the game has your ship’s warp drive breaking down in a quadrant of space fairly populated with life and you have no choice but to beam down to the local planets and try to find a way to fix your ship. I actually quite liked the opening sequence and pretty much any time Xeodrifter tried to tell some story. It was done quite well and with a good amount of heart, considering what they have to work with.

And what they have to work with is very simple 8-bit graphics. The game looks pretty good overall and the four environments you’ll explore are unique and done well. Unfortunately, I found the enemy design kind of uninspired. I would have loved to see some more detail in the basic enemies you run into. There are a few that look really neat so I know they’re capable of making good looking enemies. I can get behind a game that goes for a retro look, but I felt that a few parts of this game looked too simple. In the grand scheme of things it’s a relatively small complaint.

“It’s an homage to a game that I absolutely love, and Renegade Kid did some truly commendable things here. On the other hand, I didn’t get much excitement from exploring its worlds.”

It’s a strange point to bring up, but the menus in the game are awesome and they add a lot to the whole experience. For instance, the way you get from one planet to another is to physically fly your ship there on an overworld map. They could have just made it a menu that lets you pick your desired destination, but they didn’t, they put in the extra effort. Same goes for the pause menu where you equip your gun upgrades. It’s a nice looking screen that has everything you need to know at a glance. It’s got a lot of unique art too, which makes heading into the menus slightly less of a chore. More importantly these little touches give the game some much needed character. The soundtrack is delicious as well. 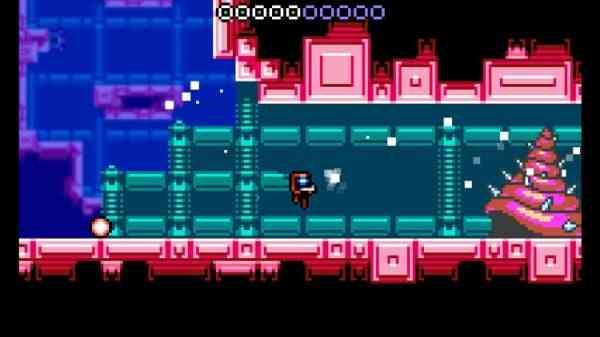 A much bigger problem than the visuals is the gameplay. Actually the game plays just fine; it’s more of a level design issue. The problem is that the only challenge the game serves up is during the boss fights. The sections leading up to the bosses are some of the most simple platforming I’ve ever done. I hate to say it, but it’s a little boring. Your character controls pretty well so I would have welcomed some more challenge. It’s inherently satisfying to go back and unlock parts of the level you couldn’t explore before. It’s just kind of a bummer when what’s unlocked is the same thing that you’ve been dealing with for the past hour. On the bright side, the boss fights are challenging and make good use of the abilities you pick up along the way. I died a lot during them but I always felt like I was getting better, and that it was only a matter of time before I figured them out.

I’m of two minds when it comes to Xeodrifter. It’s an homage to a game that I absolutely love, and Renegade Kid did some truly commendable things here. On the other hand, I didn’t get much excitement from exploring its worlds. It’s a game that will only appeal to the gamers that grew up with the games that inspired it, and even then, it might leave you wanting more. If the game was more budget priced at $5.99 then absolutely; buy it and finish it in a couple hours. But with the $10.99 price tag it feels a little thin.

Next Corpse of Discovery Review – Compelling Concept, Execution Sucked into the Vacuum of Space
Previous Bob Was Hungry Review – Challenging Platformer Gives Super Meat Boy a Run for its Money