Paper Mario is back for an all new adventure exclusively for the Wii U (and probably one of the last adventures we’ll get to enjoy on the under-rated and under-loved Wii U!). Paper Mario: Color Splash is more akin to it’s predecessor, Paper Mario: Sticker Star than the first three Paper Mario games. While I personally prefer this choice, many fans were hoping for a return to more RPG style roots. The only real traditional RPG element remaining is the turn-based battles. If you’re willing to accept the fact that Color Splash is more of an adventure platformer, and less of an RPG, then you’ll be in for an absolute treat of a game.

Paper Mario: Color Splash begins with Mario and Princess Peach receiving a colorless Toad, folded up like a letter, from Prism Island. Knowing something must be terribly wrong, Mario, Peach and Toad (another Toad, not the folded up one) set sail to Prism Island. Upon arriving in Port Prisma on Prism Island, the trio see that the island is covered in color-less splotches. It’s not long after that they encounter Huey, a talking paint can that provides Mario the ability to color any color-less splotches with his new hammer. With Peach and Toad staying in Port Prisma, Mario and Huey begin their adventure to find six Big Paint Stars that will restore all the color on Prism Island. Before they can find the Big Paint Stars, they’ll have to find a number of Mini Paint Stars (think of it as a bread-crumb trail). Along the way, Mario will encounter many familiar foes, including some bosses that will make fans of Super Mario Bros. 3 smile.

“If you’re willing to accept the fact that Color Splash is more of an adventure platformer, and less of an RPG, then you’ll be in for an absolute treat of a game.”

Paper Mario: Color Splash is laid out quite simply. You’ll start in Port Prisma, and upon finding a Mini Paint Star there, you’ll gain access to another level via the games world map. Each level has at least one Mini Paint Star to find and a whole lot of color-less splotches to paint. Find a Mini Paint Star in the level, and you’ll likely gain access to another level. Along the way, you’ll encounter a whole assortment of Toad’s needing some help. Eventually, you’ll gain access to the first Tower, where you’ll earn a Big Paint Star upon beating the boss. In Color Splash, you only play as Mario – unlike some previous Paper Mario games where you gained control of other characters. It’s worth noting that throughout the game, there are a handful of moments that can instant-kill Mario. When this happens, you’re booted back to the title screen and must re-load a previous save. It’s a bit annoying how unforgiving it is – so remember to hit every Save block, just in case!

Unlike traditional Super Mario platformers, you’ll fight bad guys via a turn-based battle screen. First you’ll pick a card to attack the bad guy. Most cards will allow you to provide extra damage if you can press the “A” button at the correct time. Next, the bad guys will attack Mario. A well timed “A” button press can block some incoming damage. This process repeats until all the bad guys are killed. Cards can be collected just about anywhere such as hitting those familiar ? blocks, coloring color-less splotches, or buying them at the store. There are a ton of cards to collect, from Jump cards that allow you to stomp on bad guys, to enemy cards that allow you to call forth a bad guy to fight on your behalf. 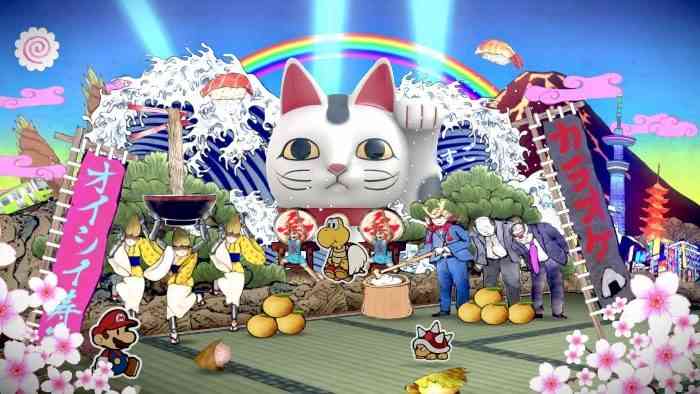 Paper Mario: Color Splash’s only uses the Wii U Gamepad. The turn-based battles require you to pick cards via the Gamepad touchscreen. However, there are a few options to tweak the way the card battles are handled. I personally changed the setting to the “Advanced” setting which makes selecting and using cards a little faster. Additionally, you can play the entire game “off-screen”, which is nice for gamers who want to just focus on one screen.

Paper Mario: Color Splash’s visuals are very similar to past Paper Mario games, but definitely enhanced thanks to the Wii U hardware. The characters are paper cut-outs, backgrounds are often cardboard-like back drops, airborne objects are suspended by string and treadmill-like rollers are affixed to spent toilet paper rolls. Everything looks like an animated storybook, created by a team of arts and crafts fanatics. “Things” are also back from previous Paper Mario games. For those unfamiliar, “Things” are real world objects, that look like they’ve been stripped from the real world and placed in Paper Mario world. “Things” generally have two functions – one function will help Mario proceed from one area to the next, like using a Plunger “Thing” on a clogged pipe. Another function is as an attack card in battles, where they usually cause devastating attacks on Mario’s bad guys. Using the Fan “Thing” in a battle shifts the battleground to outer space, where an imposing fan blows Mario’s foes straight into TV screen. 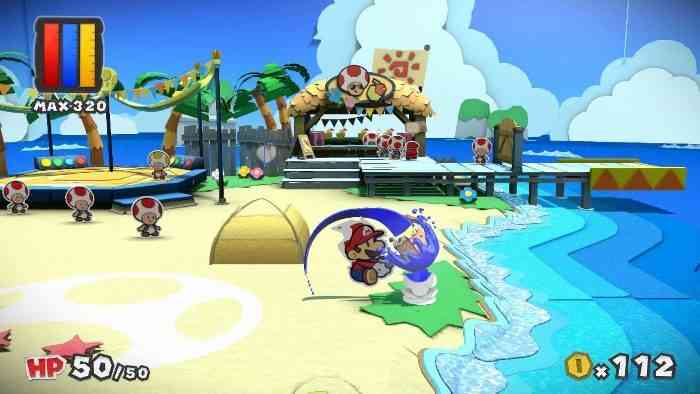 Paper Mario’s sound is pretty much exactly as you’d expect, and that’s a good thing. The music is a mix of classic Super Mario music, updated and rearranged. It’s an amazing soundtrack and one I would buy if Nintendo made it available for purchase. It’s worth noting that the game doesn’t have any voice acting at all – which is the general style for Super Mario games, but I’m of the belief that Nintendo needs to start integrating more vocals into it’s games to be more accommodating for a larger audience and create a more immersive experience. My son loves Super Mario games, but is not at the level of reading comprehension needed for Paper Mario: Color Splash. If Nintendo is adamant against voice acting for each character, a solution could be to introduce a narrator who would recite all the words on the screen. This could benefit younger gamers and gamers with some visual challenges. Of course, the narration would be 100% optional and could be turned off.

One of my favourite parts about Color Splash is the humour – while past Paper Mario games included humour, I’ve never felt they hit the mark, but this changes with Color Splash. I wouldn’t dare provide an example of the humour, as most is context based and wouldn’t mean much in a review – but there were many moments that made me laugh. Nintendo even threw in some funny pop culture homages in Color Splash – from a Star Wars type moment featuring “Holo-Peach” to a hilarious play on horror movies with Shunned Guy (a creepy Shy Guy, bent over backwards, complete with Psycho-like music).

Paper Mario: Color Splash is an excellent addition to any Wii U library. If you’re a fan of past Paper Mario games and can overlook the lack of some RPG elements, then you’ll love this game. While the game does not bring anything significantly new to the Paper Mario franchise, it does bring a nearly perfected Paper Mario experience which in itself is worth the price of admission. Paper Mario: Color Splash is a fun, laid back adventure with a ton of humour, simple but challenging battles, beautiful graphics, excellent soundtrack and a familiar cast of characters that is sure to put you in a happy place.

***A Wii U review copy was provided by Nintendo*** 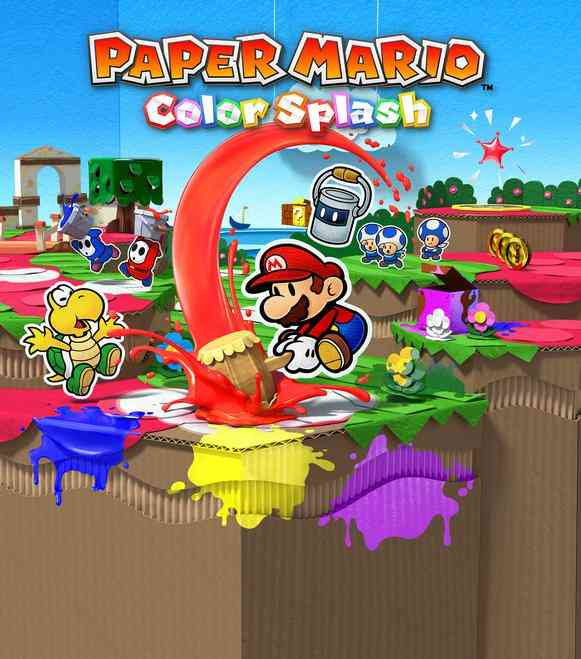