The obvious objective of all racing games is to get from start to finish as fast as you can going as fast as you can. The vast majority of races take place on tracks that are built to facilitate fast times with any impediments coming from engineered turns running the range from gentle curves to tight hairpins. The track conditions are a known quantity and the drivers are keyed to locate and lock on to the ‘racing line’.

In off-road racing, the courses offer up true obstacles, man-made and natural ones. The goal to finish with the fastest time still holds but there is no true best ‘racing line’ in off-road racing. Rather the racing line evolves because of the wear and tear on sections that are not paved but are grass, dirt, mud, rocks – big and small, hills, and valleys. 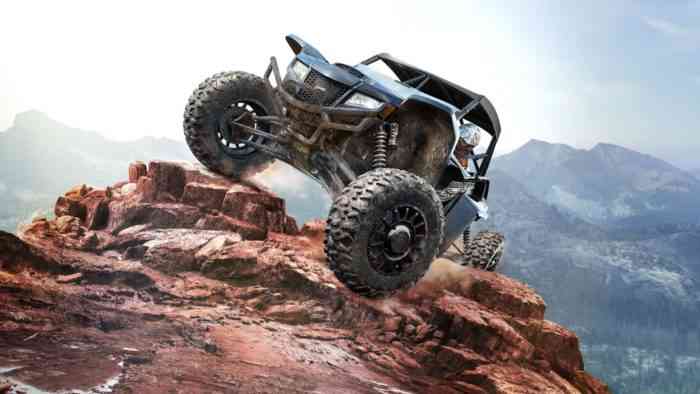 The organic nature of an off-road race track requires the driver to adapt to ever-changing conditions. What may have been the best path on a previous lap is no longer true the next time around. The type of obstacles also affect the best way. Some barriers like tires are best taken head-on while others like large rocks or pipes or logs are traversed best when taken on an angle.  What the obstacles share in common is adding elements of strategy and flexibility to an off-roads racer’s skill set that doesn’t come into play in other forms of racing.

I Want It All

Overpass comes with the requisite features of a racer: Career Mode, Quick Races, Online and Multiplayer Modes – including split screen support. There’s also a Custom Challenge mode where you can design your own schedule of events.

Also important for fans of racing sims is the inclusion of official licensing and Overpass has that from manufacturers such as Yamaha, Textron, and Suzuki. This includes a stable of twenty vehicles made up of ATVs and UTVs.

There are forty technical tracks that cover six environments including near vertical hill climbs. It’s here that the game really shines. The environments are rendered in gorgeous details. Foliage from grass and shrubs to trees all look fantastic. Water, dirt, and mud also look good and are flung in the air by the big knobby vehicle tires. Vehicles get quite dirtied up, especially in muddy sections. 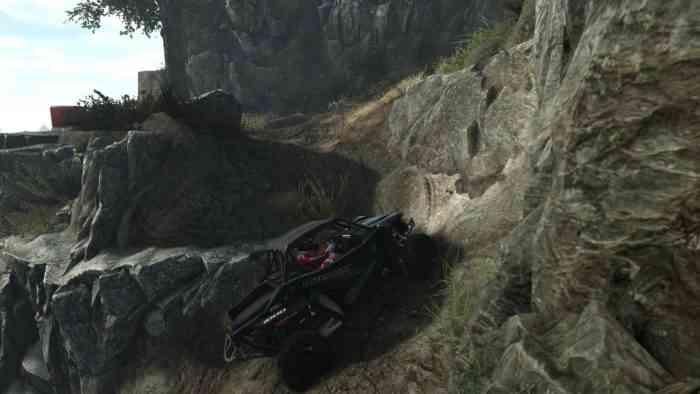 The graphical fidelity also extends to the vehicles. They all look great, especially suspension which is constantly compressing and uncompressing in response to the terrain. Several camera viewpoints are available but in actuality only the behind the vehicle view is useful. The cockpit view, in particular, is pointless because you really need to see where your tires are in relation to obstacles. Setting up the angle of attack is vital to prevent the vehicle from tipping over result in loss of time. Tire obstacles can be attacked straight on but logs, pipes, and rocks need to be taken at angles.

Sound is important in racing games but it is overlooked in Overpass. Engine sounds seem to be stuck on two settings; idle or full throttle. There is no graduation between the two which turns how much gas to apply into an unnecessary guessing game.

Racing games live and die by their physics. Especially for those aspiring to real-world simulations. Overpass touts realistic physics but on my first playtest session I didn’t see it. Using my PS4 Dualshock on my PC felt empty. The controls responded fine but there was no force feedback – and to anyone who has read my other reviews for racing games, you know my position on FFB for racing games.  Watching my ATV bouncing and jouncing over rocks and logs, sliding through muck, and fighting hill grades with no FFB was just so empty. Using my joystick rendered the experience empty. So much so that I was going to give Overpass a bare passing score of 60.

But! Then I hooked my Logitech G27 FFB wheel and lo and behold! The game came alive. Not only was I feeling the course turns but all the bounces and jolts of my ATV were communicated to me. What a difference! My level of immersion increased tenfold. Most importantly, the game became fun.

I have raced many a game but Overpass brings something new and unique to the racing genre. If you have a FFB wheel give this game a try. If not, only off-road racing fanatics will find something here to keep them coming back. 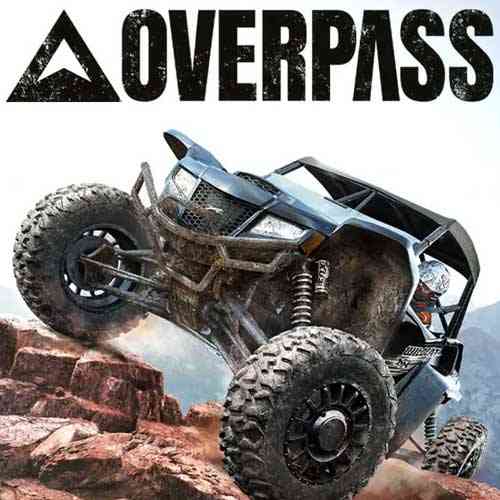