Since 2017, the Outbreak series has been dropping installments in its franchise so fast, it’s almost as if they were afraid people would forget what early 2000’s games were like. The Outbreak series channels the survival horror classics of our (my) childhood like Resident Evil and Silent Hill. The fixed camera, the limited supplies, the inventory management, all of the things that made you hate and be terrified of a plodding zombie outbreak are resurrected in the Outbreak series. With Endless Nightmares, the series takes those mechanics and game style and adds in a roguelite element as you must plunge into an ever deepening nightmare to find your way back to reality.

As you get ready to plunge into ‘The Anomaly’, the thing keeping you stuck between realities, there are a number of handy demons/ghosts that explain the conundrum you find yourself in and offer special services. Some offer advice, others offer items, and one in particular collects coins which, once you collect enough, will allow you to leave this hellish limbo. As you collect more coins, more areas become open to you around the home called ‘The Nexus’ and each offers more options to help you reach the deepest depths.

One of my most and least favorite parts of Endless Nightmare is the dedication to recreating that old school horror feel. I love playing that style again, where limited ammo and health have you managing your inventory while slowly making your way around monsters and solving puzzles. There’s a little less suspense around EN based on its roguelite style of dungeon crawling, so there’s not really the option to run around an enemy until you can find more goods or weapons and return when you’re better equipped. Once you’re in a room, you’re in it until you clear it. As with most procedurally generated content, the layouts are ever-changing, so you can’t just speed run it nor can you rely on that pistol or demon merchant being there to help when you’re gun becomes useless.

Communication is Key in Co-Op

However, there is a handy feature that really helps with the workload of the game – a co-op mode! While playing on my own, I found myself really stocking up on one or two items in particular. Which made way more sense when I started playing with someone, as you both share your item box. Clearing rooms was much easier with someone by my side, though it did create its own problems. The splits screen makes it a little difficult to judge where the edge of traps are and, as a personal issue, we wasted a lot of ammo by being trigger happy and not communicating.

Which brings us to my two least favorite parts of EN. The fixed camera directional movements and the speed your gun deteriorates. The first one is simple – in today’s games, the camera moves with you, so up is always up. In EN, up is in direct correlation to where the camera is and it reminds me why I’m happy with how games have progressed. Even though you can switch your viewpoint, moving through the hallways is still quite tedious and a little aggravating. The second is that you’re guns break down insanely fast and become useless hunks of metal. Yes, there are a number of upgrades, a lot of stronger weapons that dispose of monsters quicker, and you can turn the broken guns into repair kits, but this is still a game of inventory management. Ammo, the tools to create ammo and repair kits, two guns, a secondary weapon and health. This does help in getting through the dungeon crawling, but I always felt completely overloaded and ended up leaving things behind, just so I always had a weapon on hand. 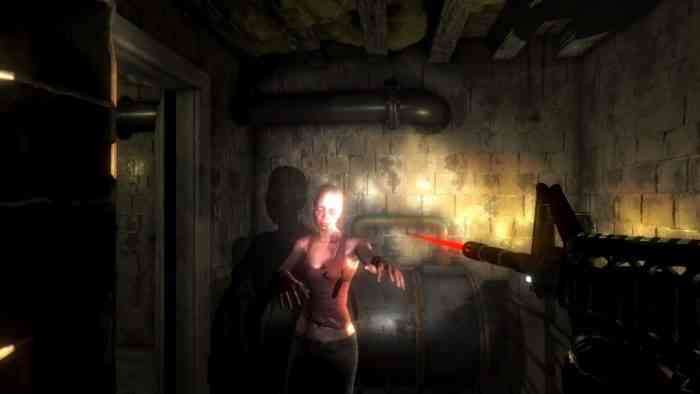 They warn you at the outset that you’re going to die A LOT. I found that once I got the hang of the dungeons, I started moving through the levels a lot faster. Give that difficulty level a little nudge up and oh boy. There’s all the dying. There’s also a Tower mode where you can score sweet collectibles, but the tolerance of pain in that one also needs to be sky-high.

However, for as much as that sense of nostalgia is great, video games have come a long way since then and I’ve become accustomed to a certain playstyle. Being so fully integrated back into an old style of game, as I said earlier, reminds me of why I’m thankful for how far games have come. Outbreak: Endless Nights does everything it sets out to and while I enjoyed some dungeon crawling and shooting zombies in the face for a little while, I’m still going to go back to my very full game library… I have far too much to catch up on to spend too much time in 2002.