Othercide is a game that comes out of left field and never waivers from what it wants to be. It’s both a refreshing take on the new XCOM formula Firaxis brought to us, and at times maddening, frustrating and repetitive.

The first thing you’ll notice is its eye-popping art style that serves to drive home this world. You are fighting to save reality, as the daughters of an ancient warrior known as the Mother. From what I can tell, you’re trying to save the Child or Chosen One by infiltrating their memories and fighting off giant plague doctors and other demons that seek to end reality. The entire plot plays out like a Bloodborne fever dream and that’s a good thing. You create Daughters and each Daughter can be one of three classes: Soulslinger, Shieldbreaker, Blademaster. The names are pretty spot on for which archetype they represent.

The Shieldbreaker is your tank-y fighter who can take hits and push jerks around on the battlefield. The Soulslinger is a double pistol-wielding badass who can snipe monsters at a distance. Lastly, the Blademaster is your melee heavy who can one shot monsters with one swing of her sword. You can only drop three daughters into a battle so how you want to mix the classes is up to you.  I mostly ran all three to get the most benefits. Othercide plays as a tactical, turn-based rogue lite. If that’s a mouthful, don’t worry. It’s basically a more melee-focused XCOM-esque with a lot of small twists. Othercide foregoes the cover-based tactics of its genre and focuses instead on the fights themselves. This makes match-ups feel less dynamic as there’s far less to worry about than in the games of its peers, but the crunchy and hard-hitting combat do a lot to compensate. 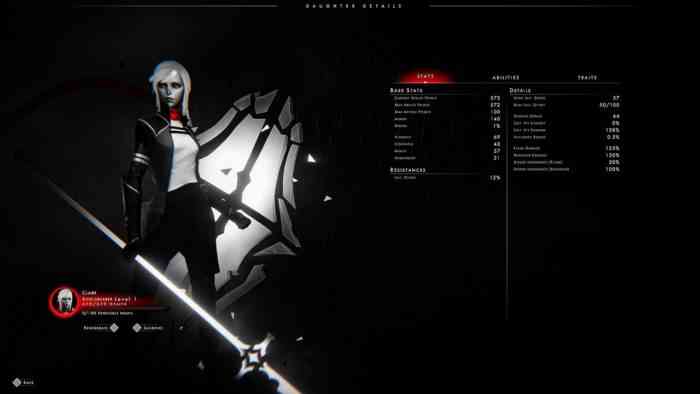 Enemies will rush you while others prefer to buff their friends or shoot from a distance, leaving your approach up to you. There’s no cover to worry about so I often let the enemies approach me, giving my Daughters solid positioning to start taking the baddies down. Othercide works in such a way that when you start out, you’ll die often. Each death is an opportunity to start over with new perks to carry forward. Turns in battle happen via a timeline that you and enemies can manipulate. And if you don’t think the timeline matters too much, the bosses will remind you how important it is by punishing you if you overextend your abilities. And here lies the rub: in order to get stronger to beat the boss of each run, you’ll need to die. You’ll then have to repeat fairly simple missions to get to the boss again in order to be just a bit stronger.

This can be very repetitive as you’ll know early on that you’re outmatched, lacking Daughter perks and run-wide perks that would give you the edge you need. So early runs will feel like you’re going through the motions, hoping to eke out a tiny bit of more power with each failure. But once you get over the hump the game itself switches into a bit of a power fantasy. I focused my deaths to ensure one of my daughters, Mercy, became the strongest, inheriting the traits of her kin. Once I unlocked the ability to resurrect one daughter per run, I brought Mercy back each time, driving her level up. She was a Soulslinger at level 6 fully kitted out with memories that made her a powerhouse.

It soon became a joke to run through each mission as Mercy would one-shot anything in range. Taking her to the final boss was a triumphant feeling as she broke the boss and his minions with only a few scrapes, moving forward into the next run and new boss.

Overall, Othercide is a solid remix of the tactical turn-based genre. The early game will feel repetitive, and I wish there was more dynamics to the maps to compensate for the lack of cover, explosions and sightlines the XCOM games use. There are also only a few mission types: escort, survive and hunt. But despite the limited mission set, the visuals, weird world, and ramp up nature do much to carry the game forward. If you’re looking for a fresh take and aren’t afraid of a punishing difficulty, then come along for the ride. Just be prepared to die. A lot.