Strategy RPGs live and die by their mechanics. If the fights aren’t any fun, what’s compelling you to continue? What’s the point, if you’re not wholly absorbed by the minute-to-minute gameplay? It turns out a truly excellent tactics RPG needs more than a creamy nougat center of combat mechanics. Turns out you need a good reason to be annihilating these monsters and slowly gathering power. Fae Tactics gets a lot of things right, but it’s missing a couple of ingredients. This indie gem is a good example of what these games can do, while it misses some things I didn’t even know I needed.

You play a magic user named Peony who’s on a quest to find her mother. Along the way, you’ll assemble a sizable cast of characters, as well as a smattering of monsters to summon. Peony is both innocent and endlessly optimistic. She’s always ready to lend a helping hand, and her solutions to various problems don’t always require the total annihilation of her enemies. In spite of the character’s initial charms, I wasn’t quite hooked by the story. Events don’t gain a ton of steam until several hours in, at which point my focus was fully trained on the combat system.

Here’s where Fae Tactics really shines. Every action your team members take feels useful in some way. You’re never just standing around, waiting for the enemy to arrive. Wait actions and assist moves ensure that none of your turns are ever wasted. You can spread out your defensive skills, or just super-boost one fighter before sending them to the meat grinder. Things like healing and status effects are handled by these same actions, so you’re not wasting time with items, either. You even get access to ultimate attacks that change their form when used for offense or defense. Unfortunately, the enemy also has access to these same skills. On top of that, they know exactly how to use them. 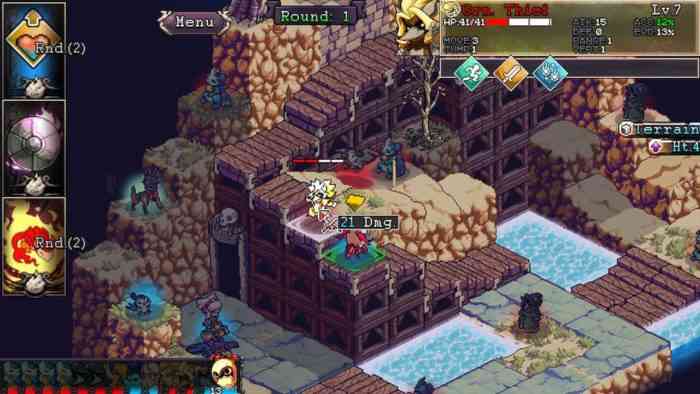 I was running with training wheels for maybe two tiny training stages, then the punishment started. Battles feel a bit like puzzles, in that there are right and wrong moves for any given situation. Sometimes you need to suffer a loss or two in order to suss out the correct path forward. While I was repeatedly put through the wringer, there were also multiple fights where I just… stumbled into success. One fighter left, three or four opponents. No idea what to do next. Then I got lucky twice, and I won? As you progress, things like element matchups and stat bonuses make things a bit less mysterious. You’ll still experience your fair share of long shot wins, however.

For the times that you don’t accidentally sneak through, the pacing starts to grind you down. A loss is a loss, but taking eleven minutes to get there can be agonizing. Some fights get hopeless and stay that way for what feels like an eternity. Your eventual demise comes as more of a blessing than anything else. I often ended up torn between suffering through a losing battle, or slamming that reset option in the menu. If I can just make this work, then I won’t have to slog through this long fight a second (or third) time. But if I’m well and truly doomed, then why waste the time? I never got completely stuck, but playing some of these stages more than once was an exhausting experience.

Battered and Back to The Trenches

Yet the game can reward your patience and persistence. If you power up your characters, master the elemental type-matching, and drill down into the way various skills interact, you’d likely never fact this kind of crushing defeat again. Like the enemies you face, you’ve got access to all the tools you need to be an absolute juggernaut. Even lining up the various elemental weaknesses can make a major difference in your performance. There’s also a crafting and cooking system to further enhance your team, if you’re so inclined.

I thought I knew what I was looking for in a strategy RPG. Specifically, I thought the combat systems were the deciding factor in a game’s overall quality. Turns out it’s a bit more complex than that. Don’t get me wrong! Fae Tactics plays beautifully, a dizzy dance of interlocking systems that reward experimentation, exploration, and endurance. If all you want is a series of complex battles marked by escalating difficulty, you can’t go wrong here. There was just something about the narrative and the pacing that kept me from getting fully hooked. You can tweak the game speed, but this doesn’t change the fundamental flow of the battles. Perhaps my time in the Disgaea trenches has permanently scarred my psyche, or maybe I’m onto something here. Either way, beyond my minor grievances is a tactics RPG built from countless layers of approachable mechanical complexity. Fans of this sleepless, neurotic RPG subgenre owe it to themselves to give Fae Tactics a shot. 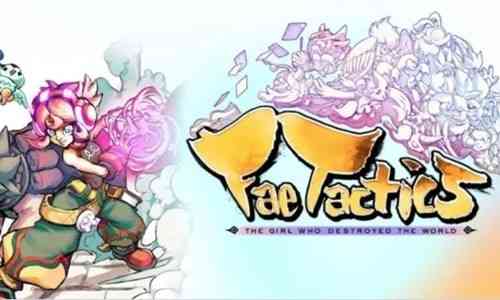