One Piece: Pirate Warriors 4 is a Dynasty Warriors-style musou game based on the popular One Piece manga and anime. The first two Pirate Warriors games were for the PS3, and the third for the PS4. All three games came out between 2012 and 2015. It’s now been 5 years since the third game. Those five years have given us a few more characters, two more story arcs, and very refined combat. So maybe not five years-worth of content, but the most content the series has to offer, which was already staggering.

The main draw of Pirate Warriors 4 is that there are 43 usable characters, all of whom feel unique. Some characters are aerial, some are gigantic, some transform, and all of them fight exactly like One Piece fans would hope they would. There are also another 9 DLC characters planned, making a grand total of 52! I hope some of the DLC characters include the main villains from lesser arcs. Characters like Eneru, Gecko Moria, and Hody Jones all got shafted, despite being the central villains of large story arcs.

The story mode, or Dramatic Log as the game calls it, is a summary of the entire One Piece saga. It briefly summarizes the events of Luffy putting his crew together in the East Blue and has the player fighting through the events of Alabasta, then goes all the way through One Piece until the Straw Hats face off against Kaido in the current Wano arc. I’ve watched 824 episodes of One Piece prior to writing this review, and still haven’t made it to the point in the story where the game concludes. Very impressive.

If you’ve never played a musou game before, some good examples are Dynasty Warriors, Hyrule Warriors, Dragon Quest Heroes, or my personal favorite, Berserk And The Band Of The Hawk. They involve a mix of button-mashing gameplay and strategic advancing of armies, which basically amounts to incredibly powerful player-controlled characters mowing down armies of enemy soldiers. Like, a lot of enemy soldiers. So many in One Piece: Pirate Warriors 4 that I earned a bronze trophy for defeating 1000 enemies while still in the tutorial level. 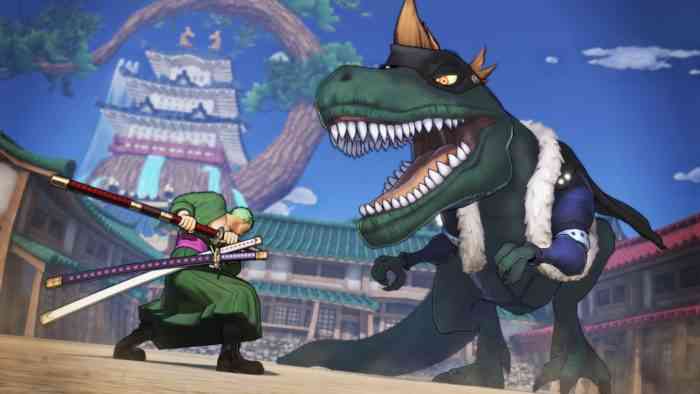 The button layout on PS4 is square and triangle for attacks, x to jump, and circle to dash. Special moves are performed by holding R1 and pressing the four face buttons. Special attacks are flashy, epic, and character-specific. There’s a stamina gauge that depletes when they’re used, but it fills quite quickly. Characters can eventually take on more powerful forms, such as Luffy going into fourth gear. The combat has a little more combo and a little more flash than the average musou game, which more than makes up for the lack of tactics needed to get through most levels. Sadly, there isn’t much challenge to be found in Pirate Warriors 4, except for a few bosses.

There’s a focus on fighting gigantic enemy bosses in One Piece: Pirate Warriors 4. They have armor gauges that can only be depleted while dodging their attacks and hitting their blind spots. Once an armor gauge is depleted the enemy takes extra damage for a brief period, and once all armor gauges are gone, the enemy is defeated. It’s pretty simple, but keeps the player from ending up in a state of mindlessly mashing buttons.

In addition to the 15 hours or so story mode, there are free play modes that allow two-player couch co-op and four-player online co-op. There’s also a gallery that contains an encyclopedia, movie viewer, and jukebox. All of this extra content is very appreciated and really makes for a great value for your dollar. 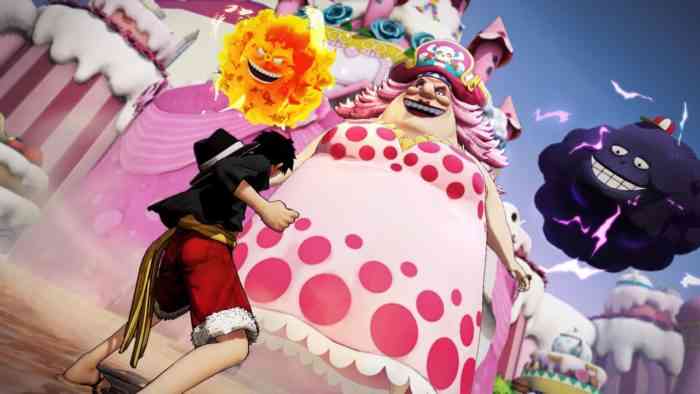 Graphically, One Piece: Pirate Warriors 4 looks like a PS3 game, but it plays fluidly, and suits the anime-stylings of the show very well. The menus and loading screens all look very slick, although load times lasted a bit longer than it seemed they should have.

When I started up the game I was disappointed that Japanese wasn’t one of the language options, but those options were just for menus and subtitles. The entire game is in Japanese, which was a treat for folks like me who watch the show subtitled, but there’s no English dub option, which will definitely disappoint fans used to the English voice cast. It also would have been nice to hear the music/ themes from the show, but the epic guitar-driven music in the game suits the pirate theme and heavy combat just fine.

If you’ve never played a musou game before, then One Piece: Pirate Warriors 4 is a fantastic one to start with. If you’re not a One Piece fan, however, your enjoyment of the game’s story may be limited. But if you like One Piece, and/ or like Dynasty Warriors, then you need this game in your life.