Everything you need to know about One Finger Death Punch 2 is in its title. It’s played with only one finger, there’s a ton of death and punching going on, and it’s a sequel. That simplicity extends to the entire package and the game never wastes your time thanks to super-fast load screens and a ludicrously easy two-button control scheme. More importantly, OFDP2 is insane fun, boasting super smooth gameplay and ridiculous, over-the-top animation. It’s not a huge leap from the first game but since the original isn’t on Switch, it’s the perfect side dish to bite into after finishing other bigger and meatier games.

In fact, developer Silver Dollar Games has officially said that they built the game as a palette cleanser between other games in your library. In other words, this crazy stickman brawler should be in your digital collection as a means to unwind after long sessions of whatever else your playing. I tested this theory, and I gotta say, it holds true. Playing a few quick stages after blitzing around Apex Legends made me appreciate OFDP2’s sensibilities. It’s best played in short bursts and is one of the best pick-up-and-play games I’ve ever played.

As I mentioned earlier, One Finger Death Punch 2 is all about simplicity. It’s not interested in bombarding you with complex systems or controls, even if what’s occurring onscreen might be enough to make your eyeballs bleed. This simplicity extends to its art style as well. While stick figures are boring in the traditional sense, it lends a certain level of charm to the game’s overall presentation. I wouldn’t call it a pretty looking game (screenshots definitely don’t do this game justice) but in motion, it’s quite the eye-catcher. 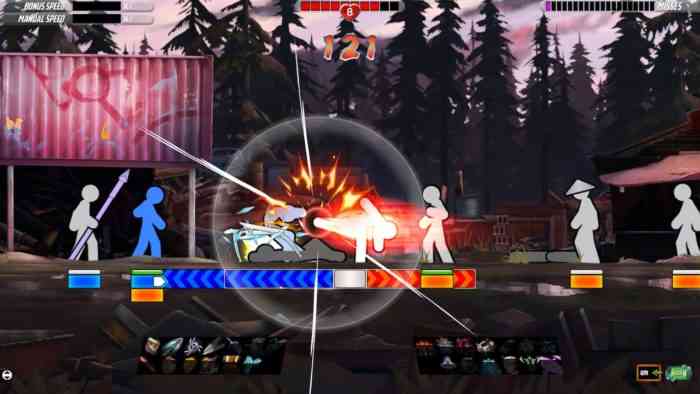 Just like its predecessor, there are only two buttons to press in the entire game outside of menus and such. One button corresponds to enemies swarming from the left, and the other button for enemies on the right. Timing your button presses correctly will unleash violent and deadly attacks to your opponents. It might not sound hugely appealing at first, but part of what makes OFDP2 so much fun is seeing just how far this simple concept can go.

And oh boy, do they take it to some very weird places. Even in the beginning tutorial stages, OFDP2 revels in its silliness. I couldn’t help but laugh at how zany everything got so quickly. From endless waves of stickmen enemies to suddenly bashing them with swords and chainsaws, to riding a horse (for reasons), to killing the last baddie in a Mortal Kombat-esque fatality finish, One Finger Death Punch 2 doesn’t stop with the surprises.

A Lesson in Hand-Eye Coordination

It all escalates quite naturally too. In the beginning, it’s a simple matter of pressing either the left or right buttons to attack. Eventually, those enemies start coming fast and furious and even require two or three hits to properly takedown. Sometimes they’ll switch positions or force you into a rhythm mini-game to finish them off. Then there are the enemies on the outskirts that like to throw knives, arrows, and other ranged weapons that you have to be mindful of. It can definitely get a little busy at times (I had to remind myself to blink) but it always comes down to either pressing X or A at the right time so it never feels like an impossibility to overcome. Missing a press takes away some of your health but there’s plenty of times to rebound and still finish a level spectacularly. 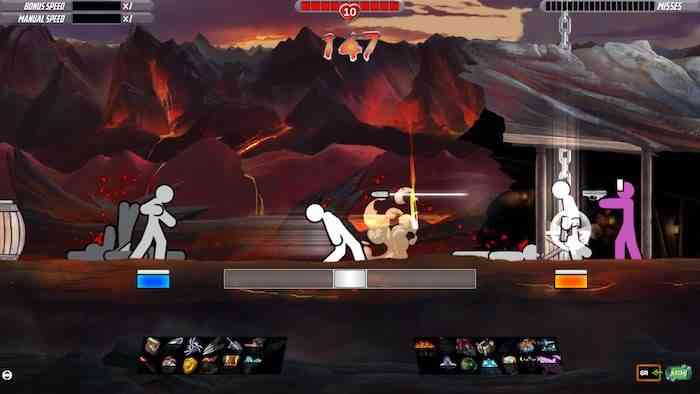 It’s hard to talk about OFDP2 without mentioning the boss fights. These battles take everything you’ve learned from previous stages and place them into a single, balls-to-the-wall combat match, unlike anything I’ve ever played. Those mini-games I mentioned above return way more frequently and there’s even a handful of button-mashy QTE’s to keep things interesting. Their fights are intense and it’s where I felt the most challenged out of the games’ 15-hour campaign.

There’s a decent chunk of content crammed into the game as well including over two dozen upgrade skills, new modes, and level types. The skills are a great addition and unlike the first game which restricted you to using five skills at a time, the sequel allows for all of them to be active at once. Survival mode, (a mode where you fend off an endless supply of enemies until you die) also returns and still makes for an adrenaline-pumping good time. There’s also now a couch co-op option of Survival mode where you and a buddy can play together, tagging in and out of combat and passing the controller. In between turns, the other player regenerates health until it’s their turn to take over. It’s certainly a lot tougher, but it’s still a fun if not somewhat unnecessary extra. 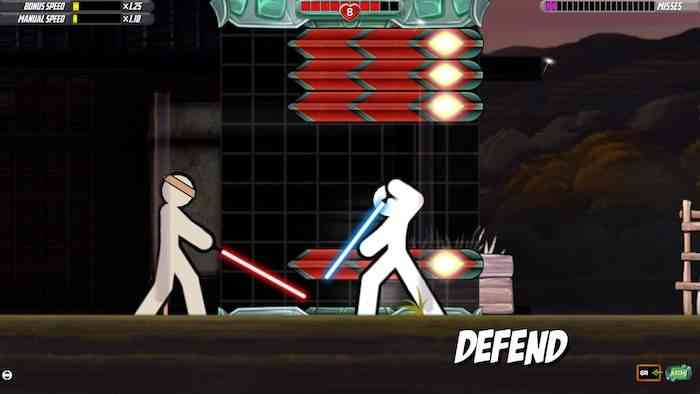 On Switch, OFDP2 runs astonishingly well even in handheld mode. It might not look like a taxing game, but there’s a whack load of crazy visual effects that I for sure thought the little Nintendo tablet would not be able to handle but, alas, I was wrong. My only real gripe is with the menu systems. They don’t look great — the text appears a little off to me — and they’re a bit of a mess to navigate especially when retrying old stages for a better high score. Compared to how fluid and flashy the main game is, the menus could definitely do with a makeover.

Silver Dollar Games has not only delivered on making the perfect palette cleanser game, they’ve also made a damn fine, addictive, and unconventional beat ‘em up. Fans of the original game might be a little upset it’s not a massive leap forward but, honestly, when you’re having this much fun, does that really matter? And when you factor in the low entry price on the Switch eShop, One Finger Death Punch 2 is a no brainer purchase for a game you’ll be happy to return to again and again…and again. 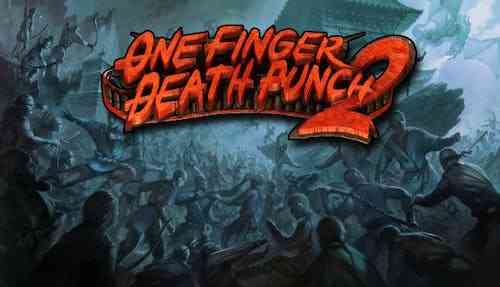