Cardboard. It’s the flavor most associated with gluten-free foods and it’s also the focal point of our latest review, the Nintendo LABO Robot Kit. The first LABO kit, the Variety Kit, gives gamers six different projects to build. The Nintendo LABO Robot Kit downsizes the amount to just one project – but it’s a big one! If you’re the type to break out the robot dance whenever you hit the dance floor, this project is just perfect for you – also, stop it… just stop that robot dance crap. Beep boop.

When you first crack open the Nintendo LABO Robot Kit, you’ll be greeted by a game cart that you’ll need to insert into your Switch. Like the Variety Kit, all the instructions are provided via the portable Switch screen which you’ll control via the Joycon or the touchscreen. The Joycon is the best bet, as I found using the touch screen caused me to often topple over the screen. Before you start building the robot, you’ll be given a small test project to put together, a Joycon holder (just like in the Variety Kit). After that’s done, it’s time to begin the extensive Robot project. Be sure to put aside a good five to six hours to get this project done – it’s a lengthy process.

If You Build It

The actual building process is broken down into around eight or so steps, starting with the wearable headset (where one of your Joycons will be inserted) to the backpack (where the second Joycon is inserted). I won’t go into too much detail about the building process – it’s really a matter of following each step as instructed. The process is slow, but once it’s complete, you’ll get a fully functional robot suit that includes a backpack, straps that attach to your feet, a headset and two handles that you’ll hold in your hands. You’re completely outfitted, but you’ll look more like a Ghostbuster with the proton pack than a robot, but that’s okay – the robot bit comes next. 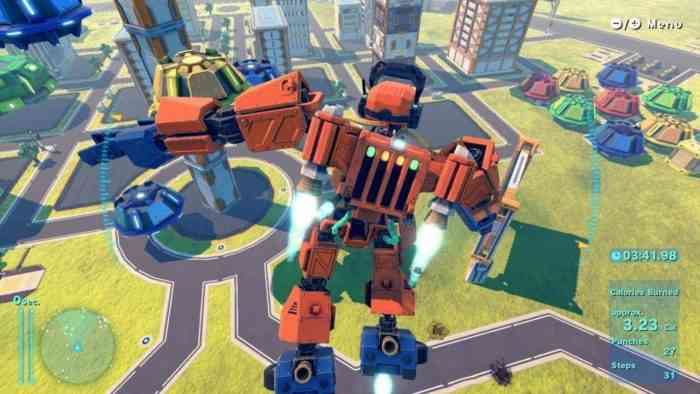 Once the cardboard project is complete, you’ll have to strap yourself in, which will take some adjusting. You’ll need your foot straps and handles to be at the perfect length, but fortunately, a small tutorial video will show you how to set everything up. Before you know it, you’ll be put into the first mini-game, Robot. In Robot, you’ll move around a small city that looks like it was ripped out of a Star Fox game with the sole purpose of punching UFOs. Despite your offensive capabilities, there aren’t any enemies attacking you – it’s quite a passive city that you get to destroy. Lifting your legs (think: marching) will move you around, one foot at a time. Punching while holding either handle will make your robot punch too. It’s not exactly one-to-one movements, so if you’re thinking of trying to do an uppercut, don’t bother, the punches are all the same. Leaning left and right will make you turn in that direction – it’s probably the most awkward movement in this game, but you’ll get used to it. Squatting down will turn your robot into a sweet tank that’ll move you at a fast pace around the city (again leaning to turn left or right). Punching in tank mode fires blasters. If you have your headset in the upwards position, you’ll be in third person mode, if you’re headset is in the forward position (like wearing glasses), you’ll be in first person mode. In first-person mode, you can extend both arms to your side and activate a flying mode. Flying mode is pretty difficult to navigate, but it’s a cool effect. After five minutes, your game ends and you’ll be given a final high score. And that’s it. Replaying it again will be to simply beat your high score.

The Potential is There

Fortunately, unlike some of the other LABO projects, the Robot project has a couple additional mini-game modes for gamers to play through. The most robust is the Challenge mode that pits the player in a variety of different objective-based levels that’ll test your different robot skills. It’s a nice change from the standard “Robot” mode. Then there is a versus mode that pits you against another human player. I have no idea how it works, as I have to assume you would need another player with the full LABO Robot kit – but I didn’t have means to try that out. It’s a shame they couldn’t have added a computer-controller opponent for versus mode. There are some additional customization options and modes to toy around with, but none of them seemed very appealing. And like the Variety Kit, there is a robust “Discover” section that shows how all the components of the Robot Kit works in conjunction with the Switch, Joycons, and game. It’s a nice touch but really doesn’t add a heck of a lot to the overall package. 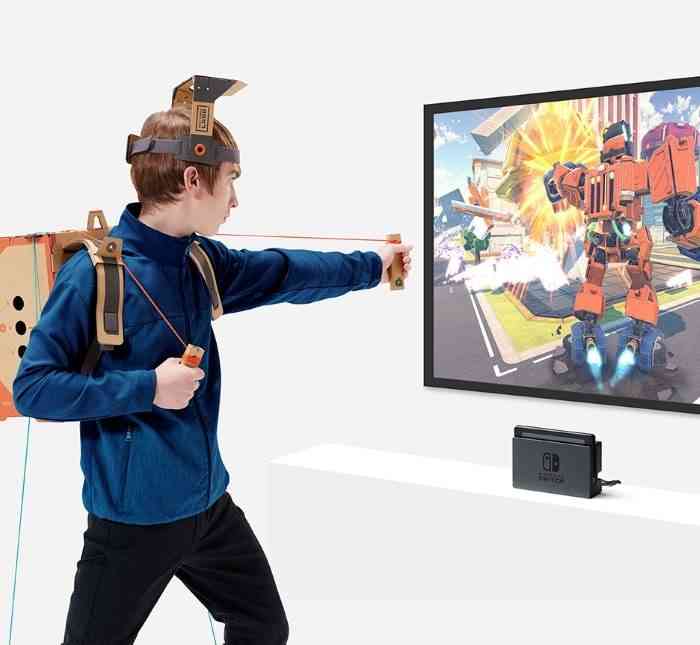 The Nintendo LABO Robot Kit is one substantial project that’ll take you half a day to build. It’s a satisfying project to complete. After you’re finished, you have a few different mini-games to play, but none of them will make you want to come back over and over. It’s difficult to recommend the Robot Kit. Sure, it’s fun to build and the mini-games will give you some short-term enjoyment. And of all the LABO projects, my kids (3 and 7) both had the most fun playing the Robot Kit project. However, this presented a separate issue – constantly having to refit the Robot outfit to accommodate the different sized gamers. I’m 6′ tall, and I fit into the suit fine, as did my 3-year-old – but each player has to have everything fit specifically to their size or it won’t work. If I was going to recommend one LABO product, I’d definitely pick the Variety Kit, there’s just more to do there. But if you’ve completed the Variety Kit and are desperate for more cardboard fun, than the Robot Kit is your only other option – just don’t expect any long-lasting enjoyment. 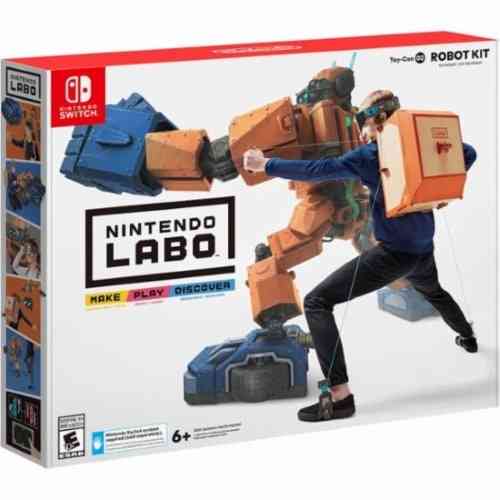