It’s safe to say 2017 has been a solid year for challenging platformers and Metroidvania style games. We got a full-fledged Metroid title in the form of Samus Returns and then there was the tough, but gorgeous, Cuphead shortly after; both of which were met with a great deal of praise. When I heard about Nightmare Boy, a Metroidvania game published by BadLand Games, I was hoping this hot streak would continue. Its whimsical dream world premise seemed fun and it showed a lot of potential. Unfortunately, once I actually got my hands on the game, my hopes were immediately crushed.

You begin Nightmare Boy as an average kid named Billy who is attacked by an evil pillow wizard and turned into a monster. He must then follow the pillow wizard into the dream world to turn back into to his former self and return home. It’s a straightforward setup but was open-ended enough for me to believe the story could eventually go somewhere interesting. However, after meeting a few new characters and beating some bosses, I began to realize how little the plot was actually taking shape. Billy’s character doesn’t evolve much beyond wanting to escape his nightmare and most of the characters he meets along the way are merely there to give him an item or are residents of the world who ask a nonspecific favor of him such as “finding a part” they need. These characters didn’t need to be crucial to story if they at least had interesting backstories or added to the world building. Thanks to some consistently uninspired writing, however, most of the characters either felt unoriginal or straight-up boring. To make things worse, Billy is one of the best examples of this poor writing. He has almost no personality and most of his dialogue feels like it was written by a robot.

“Nightmare Boy is one of the most frustratingly difficult games I’ve played in a long time, with a strong emphasis on ‘frustrating.’ “

The core gameplay loop doesn’t diverge much from other Metroidvania games. There is one large map with branching paths that can largely be explored freely. Some areas are restricted unless you have certain abilities or items but how I explored felt mostly organic. That being said, one thing Nightmare Boy is sorely missing compared to similar games is an incentive to explore and return to previous areas. There are very few collectibles or power-ups hidden throughout the world. This meant I had virtually no reason to do anything in the map besides finding the next boss I needed to face or a certain item I needed to progress. Unlike a game like Samus Returns, where finding health or missile upgrades can legitimately improve your odds of survival and make you feel more powerful, Nightmare Boy gives the player extremely few reasons to risk exploring the dungeon-like world more than necessary. And trust me, there is a significant risk. 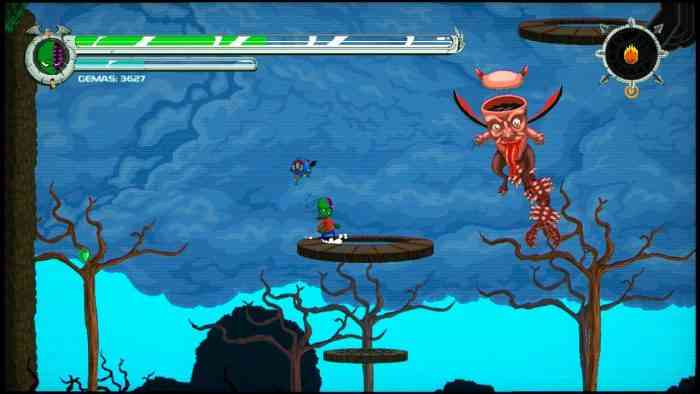 Nightmare Boy is one of the most frustratingly difficult games I’ve played in a long time, with a strong emphasis on ‘frustrating’. Even on the easiest difficulty setting, certain levels can be treacherous. However, instead of feeling challenging but fair, it feels hard for all the wrong reasons. The first problem is the how the game controls. The jumping physics feel terrible, which made any platforming sections that required skill agonizing to get through. Additionally, besides a few unimpressive ranged spells, Billy can only attack enemies by punching them. This becomes a problem when you encounter certain enemies that deal significant damage if you come close to them. Another issue lies in the checkpoint system. There are designated save rooms throughout each of the different areas, but they seem to have been placed without thought, and if you die, you go all the way back to where you last saved. There were times when I would get through a section and reach the boss only to die and have to do the entire level over again just to reach the same boss. If the moment to moment gameplay was truly interesting, this may not have been such a huge issue, but with how poor the level design is, having to start a section all over again felt like torture.

“… my time with Nightmare Boy felt like a bad dream I couldn’t wake up from.”

Thankfully, Nightmare Boy isn’t all bad. My favorite aspect of the game is the thoughtfulness that went into the enemy designs. Though many of them are not fun to fight against, they are all at least aesthetically interesting and varied. I really enjoyed the character designs of the bosses, which range from demented princesses to enormous undead knights. An equal attention to detail went into the visual design of the various regions of the map. You’ll immediately notice when you transition from one area to the next, as entire landscapes will shift drastically, bringing with them unique enemy types that fit well within the themes of the environments. It’s a shame this level of creativity and consideration didn’t carry over to the rest of the game and makes me wonder what Nightmare Boy could have been if given some major adjustments to the other aspects of its game design.

Nightmare Boy had the potential to be a quirky and fun take on the Metroidvania platform, but it squanders that potential by falling flat in nearly all the fundamental components of what makes those types of games fun to play in the first place. It has some neat character designs and thoughtful art choices, but they don’t make up for the numerous glaring flaws. From the generic writing and bland characters to the atrocious level design and floaty controls, my time with Nightmare Boy felt like a bad dream I couldn’t wake up from. 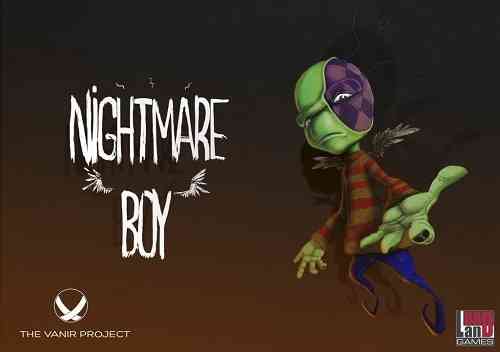