Never Give Up Review – Push it to the Limit, But in a Good Way

Never Give UP Review

To the gamers who enjoy being in a constant state of frustrated gaming by playing challenging games such as Super Meat Boy or Cup Head, be prepared to lose your cool yet again. Never Give Up, developed by Massive Monster, brings us difficult challenges, quirky dialogue, fast gameplay and never-ending rage.

You’ll be tasked with taking our little blue hero through a variety of traps and obstacles that are just designed to grind you up. In the typical 2D-sidescrolling fashion, players will have to complete a series of levels or rooms as they are called here, that are armed to the teeth with insane death traps for you to overcome. Each room will have 5 or 6 different variants of obstacles to complete, scaling in difficulty to better keep you on your toes. Once each variant has been completed, our blue friend can finally move onto the next room and to slowly uncover who may be behind all of this and why. I have to say, the writing and voice acting, while minimal, was genuinely very funny and I really enjoyed the quips made by the main characters. 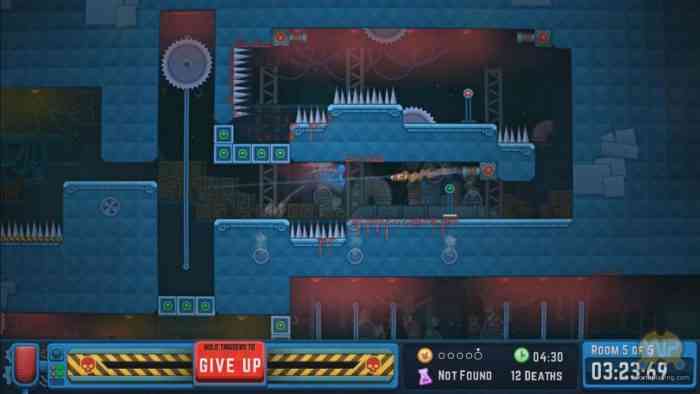 I haven’t played many games in this particular genre, but I found Never Give Up to have some pretty solid and easy to pick up controls. Double jumping over spiked pits, jumping from wall to wall to doing whilst sliding underneath a saw blade is incredibly satisfying, however I did find the levels to be somewhat repetitive. Perhaps it was on purpose to have each variant be similar so the room themselves could be set up so differently. It does feel like a bit of a cop-out when you get to the next portion thinking “Wait, but I JUST did this!!”. Despite the added traps, if it weren’t for the scaling in difficulty, it would be much more disappointing than it is but it’s something that I can forgive. However, players who are much passionate about this genre of gaming may think differently. 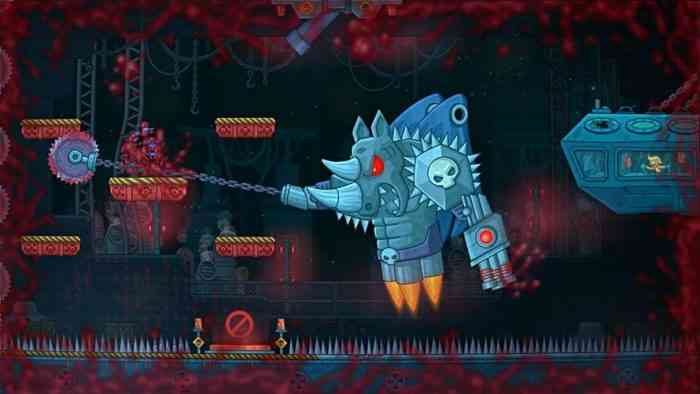 Despite the game literally called Never Give up, there is actually a give up button located on the lower part of your screen in case you feel the need to rage quit. While feeling frustrated, you’ll find yourself feeling quite amused quickly as the next screen will give you a quirky message that almost in itself feels like a kind of prize. The only time the Give Up button is no longer available is during a boss fight after completing all of the rooms in a level set. Now you’ll just have to make like old school and die over and over again until the boss has been beaten. 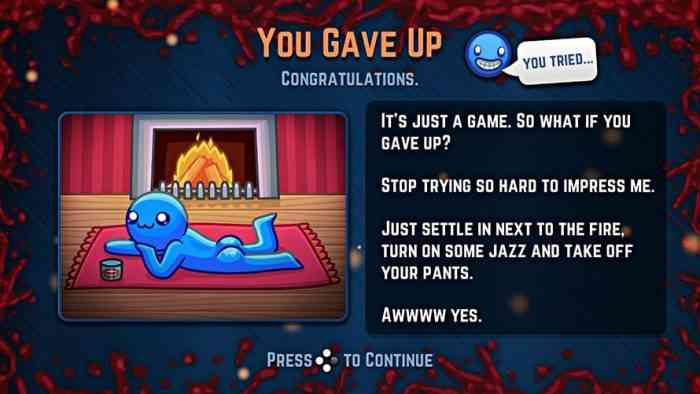 Rooms also have a time recommendation for our more hardcore players to try and beat. And adding even more challenge, the developers have added collectables such as coins and chemical vials sometimes found in secret spots. Collecting coins will unlock various outfits for our little blue friend but are usually found in very challenging locations within each room. Fortunately for us, the developers aren’t all cruel and have added checkpoints for those who may not be as skilled at these types of games. I’ll even admit, I had to hand the game off to my SO as some of the levels just felt absolutely impossible to beat.

As a challenge from the very beginning, fans who are into this sub-genre will surely enjoy Never Give Up. With clever quips from our characters, the solid controls to the satisfying jumps and evades, get ready to jump through missiles, slide through hammers and evading charging rhinos, this is definitely a title worth picking up. 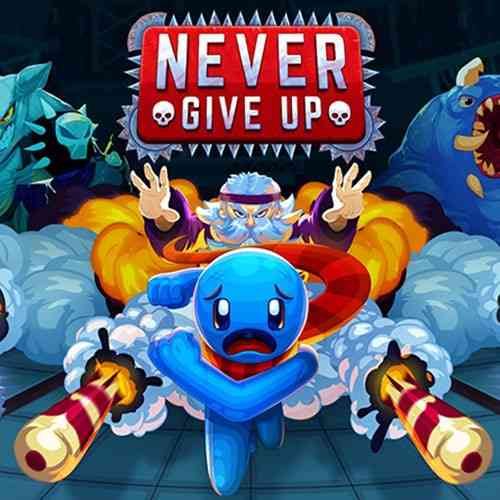