Necro Mutex Review – Welcome to the Gallery of the Grotesque

Video games are no strangers to violence. Name one of today’s big franchises and you’ll likely realize it features some form of violence in its gameplay, be it cartoonish characters blasting each other into smithereens, or high-speed chases with cars slamming into one another. Even games with young fanbases, like Fortnite or Minecraft, are no different. But where is the line drawn? At what point does video game violence cross the threshold from fun to gratuitous, off-putting, or simply put too much? While this is not a debate I’m capable of settling, I can confidently say Necro Mutex teeters dangerously close to that edge. 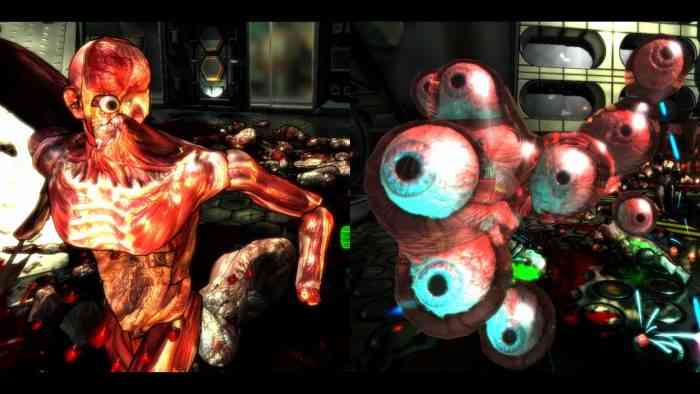 Necro Mutex puts you aboard a space station overrun by a massive undead horde. The station’s rogue AI has conducted gruesome experiments to the crew, transforming them into thanatoids, creatures described as being stuck in a state between life and death. As the sole survivor, you must fight the thanatoids force in 10,000 levels (yes you read that correctly) to survive.

Billed as a hardcore old-school shooter, Necro Mutex certainly has no shortage of combat. The first level alone contains close to a hundred enemies, and that number rises astronomically into the thousands by the final levels. In your arsenal are a large array of weapons to dispose enemies with, from the starter pistol to a mini-gun and a flamethrower. The guns, while varying in form, lack feedback and punch. Even the shotgun, capable of quickly blasting eight rounds at once, feels dissatisfying to use. However, for me, the problem didn’t lie in the weaponry, but in that I didn’t want to kill in the first place.

The thanatoids, hideous as they appear, bear far more resemblance to humans than monsters. Their limbs explode off when shot. They leave behind grotesque carcasses and large puddles of blood, filling levels with trails of gore. This is a prominent issue because most of the thanatoids don’t quite fight back. They simply walk around aimlessly, not posing a threat. They act as shooting targets that bleed rather than real enemies. When you kill them, there is no sense of accomplishment or challenge. After all, where is the fun in gunning down unimposing foes, let alone foes that look so human? If there is any fun to be had at all, it doesn’t last, thanks to the repetitive nature of gameplay. You shoot, run to the exit, then repeat the process in the next level. If you’re like me, you may wonder why you should bother to fight at all.

The story, told through loading screens, doesn’t come close to justifying any of the violence. You’re given little reason to commit these acts besides the fact that you have a gun in hand. The only motivation offered is, oddly enough, money. For each kill earned, you’re rewarded with money, which is used to upgrade weapons, stats, and abilities. You’re encouraged to rack up kills and thus a high score, to become better equipped to land even higher scores.

These design choices only resulted in a disconnect with me as player. Necro Mutex clearly strives to be a simple arcade experience, one that harkens back to the days of mindless running and gunning. But whereas the classics that Necro Mutex pays homage to like Quake, Doom, and Serious Sam tackle violence with purpose, using it to reinforce theme, serve the narrative, and bring about a feeling of catharsis in the player, here violence exists for the sake of violence. There is no larger message, nor humour or charm to offset the onscreen brutality. The world is not at stake. Humanity is not at stake. The only thing in jeopardy is the life of the player. Is that truly worth massacring thousands upon thousands of human-like enemies for? 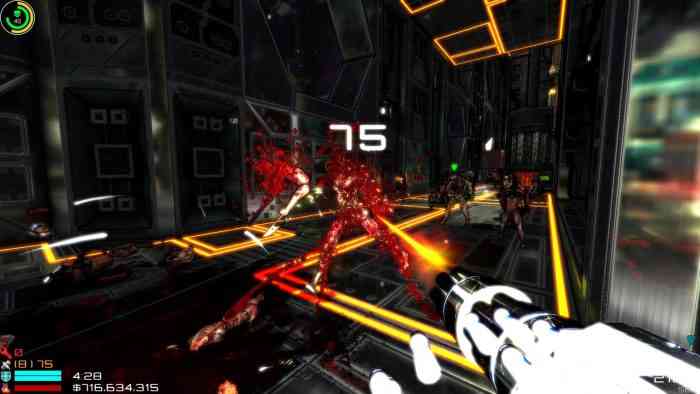 As for the previously stated number of levels, Necro Mutex truly does boast an astounding total of 10,000. Levels can be done in any order, and you have only one chance at each; fail once and that level becomes locked forever. Such quantity sounds great in theory, but since levels are procedurally generated, the only differences between level 1 and level 10,000 are the length of the level and the amount enemies present. Even if the violence doesn’t rub you the wrong way, then the repetitive gameplay and sight of the same few repeating environments surely will. Occasionally, modifiers are thrown in the mix, like a shorter time limit or no visual indicator to guide you forward, but they are more irritating than meaningful to play. When I found out that levels can be completed as soon as I touch the end point, I took to jumping over enemies instead of fighting them, making a direct beeline straight for each exit. This wasn’t how Necro Mutex is meant to be played, but the game failed to compel me to play it as a shooter.

Necro Mutex also supports VR. The HUD, for some reason, is much more intuitive in VR, with gameplay information like health and ammo floating in clear view beside your weapons, rather than appearing in the far corners of the screen when playing on a monitor. VR users with front-facing sensors will find Necro Mutex unplayable, however, as there is no way to perform snap turns.

Necro Mutex wants to be an old-school shooter but it fails to capture the elements of what made those games special and fun. It throws plenty of gore and carnage in your face without ever stopping to consider why. This tactic may satisfy those seeking a cheap thrill, but it didn’t work for me. And when there are already so many classics old-school shooters available, there’s really no reason to bother with Necro Mutex.

Update: We are told the game has VR rotation options and 180 degree tracking.


Crysis Remastered Trilogy Review – Almost as Good as It Ever Was