Pode, from indie developer Henchman & Goon, is a cute little co-op puzzle adventure title that released for the Nintendo Switch last year and is now available for the PlayStation 4. After a brief glimpse at the teaser trailer, it’s safe to say this one had me intrigued. But the question remains, does Pode do enough to grab and hold your attention the entire way through?

After a flash of light, a star named Glo falls from the sky, and is quickly met by a little rock called Bulder. The story of Pode follows the two as they journey together through the hidden paths within the fictional Mount Fjellheim. What has been long forgotten, devoid of any life or color, is rejuvenated as the two companions make their way through the caverns, solving puzzles, finding ancient symbols, and building a friendship to last a lifetime. It’s hard to miss the emphasis placed on the relationship between Bulder and Glo, especially when solving puzzles that slowly build in difficulty. After playing through a variety of smaller, easier levels, you’ll come to these ultimate levels that will require more strategy to get through. These more difficult levels, while not inherently hard, require a sequence of events to be completed and often new abilities in order to get through them successfully. With that said though Pode is a casual adventure and so there’s no real time crunch here so players can take as long as they want to solve the puzzles.

Pode can be played either as a single-player experience or with a friend as a couch co-op. Now the single-player gameplay can be a bit more challenging in that you have to remember more controls, and capabilities than if you were playing with a buddy. Despite the occasional button confusion however, this allows a more focused approach to completing the game, as well as a bit more freedom and flexibility. Couch co-op, on the other hand, seems to add a little bit more fun to the game as you and your partner work together to solve the platforming puzzle, but at the expense of player freedom. Regardless of the character you choose, you’ll never feel you can do much alone, as they have to work together to achieve success. Now this is something that works very well as a couch co-op and Pode builds on the age old sequence you might find in the Lego games where you can only walk so far without your partner. In fact, here you are often unable to figure out where specific switches are, or how to open the door, or even exit to go to the next level without your partner. And that definitely adds a weightiness and a meaningfulness to the team dynamics of the couch co-op component.

Pulling You in One Level at a Time

Whether you choose to play Pode by yourself, or with a friend, it presents itself as a very cute and deliberate puzzle adventure, as the level design is very well thought out on all fronts. From bringing the world to life brilliantly, one rock and plant at a time, to having level sequences that build on one another in a unique way, Pode pulls you in for the gameplay alone. I found myself wanting to keep playing to find out what happens with Glo and Bulder and to see how the main level environment would develop after completing each and every group of levels.

Now the controls aren’t terribly difficult at any given time, but as you progress through Pode you’ll learn a plethora of abilities that you’ll have to use in combination in order to get through the later levels. These include Bulder being able to eat and launch Glo across environments, Glo being able to activate plants that Bulder can walk across, teleporting abilities and more. Though I’m not about to go through all of the various controls here, just be prepared to press multiple buttons at the same time in order to switch between characters and more in order to accomplish each and every level. And don’t be surprised if jumping or even simple walks across a fern leaf become a bit more frustrating than they should be in this casual adventure because that’s a very real issue here. Sure, it isn’t completely overbearing, but the camera angle creates problems whenever you’re trying to figure out the depth of any type of movement and this could certainly use a bit of a rework. Good thing the pace of the game is a bit on the slower side because if there was some type of intensity involved, this camera issue would be a much larger and more distracting problem, taking away from Pode in a big way. 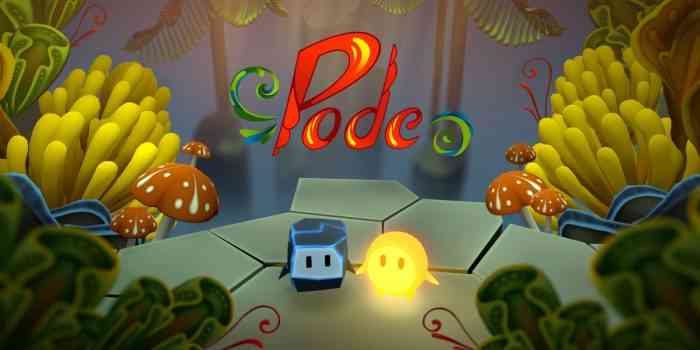 Honestly, while there isn’t much of a pull to the story itself, with Bulder helping Glo on a journey home, something that’s only made worse by the lack of words spoken throughout the game, the music and graphics more than make up for this void. With the way the music and little sounds of each environment are laid out in the game you can’t help but feel connected to the world and the two cute little characters. In a slight way Pode reminds me very much of Ori and the Blind Forest, which is a huge nod given the emotional roller coaster that game is. As strong as the musical numbers are throughout the game, keeping with the peaceful pace and slight emotional attachment the two playable characters have made, the graphics are really what set this little casual puzzle adventure apart. Much like the level design progresses the more you play, so too do the graphics. Now I’m not talking magically an indie game becomes a triple A graphical masterpiece, but rather the colors of the game stand out and make you want to see more. Pode is beautifully crafted with monotonous tones of brown and grey that turn into works of art as the rocks and greenery come to life as you move around it with your special abilities.

Pode does a good job of being adorable, puzzling in all the right ways, and fun, all in the span of a few hours and while it’s worth mentioning the game seems a tad too short, the consistent pacing throughout makes it feel like a bit of a longer journey than it actually is. Despite camera issues that made the platforming and gameplay mechanics a bit more challenging than it needed to be, and although it could have used a more engaging storyline, the environments and the bond Glo and Bulder share bring an enchanted feel to the entire game that’s hard not to find charming all the way to the very last moment. 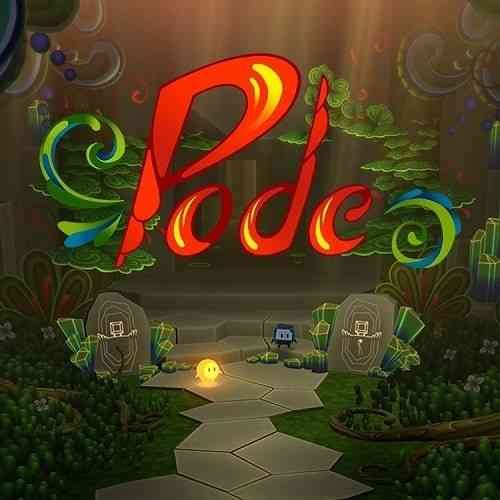