NBA Rush is the NBA’s attempt at capitalizing on the popularity of endless runner games. As much as I dislike the sport this game is actually really fun. The premise here is aliens have attacked Earth and it is up to a roster of NBA stars (three from each team) to save the planet. As a giant clawed aliens chased your players you must navigate three lanes of city streets and the various obstacles created from the alien attack. You’ll have to jump over cars, onto buses, dodge mines and debris and duck under barriers. Along the way various power ups can be obtained along with coins and the occasional diamond.

NBA Rush’s twist on the endless runner formula is that you play with a squad of three players of your choosing. You proceed through the course one player at a time. New players from your “team” are tagged in as you fill up a meter by attacking the various aliens. Each player switch comes with an added score multiplier. This all brings an element of strategy I wasn’t expecting in how you make up your team, which players to choose and level up. There is also a daily challenge to collect gold NBA logos that appear during the game. Collecting five each day rewards you with coin bonuses. Doing this consistently over consecutive days increases the reward. Using increasing returns is an interesting hook to keep players playing the game from day to day. This sure makes increasing your coins a lot easier than trying to grind it out via game play alone. This all makes for a game that I found very hard to put down. The “just one more game” quotient is high. This fun comes at an expense though. This game sucks battery life fast. It seems to drain even after you’ve played when the game may still be running in the background.

The game itself is free to download and completely playable without having to pay a cent. However the rewards are meted out so slowly that it takes an incredible amount of time to progress deep into the game without plopping for a few dollars. The $4.99 offer for double coins is tantalizingly placed at the top of the store list. Coins are used for upgrading the various power ups and buying draft picks to get new players. Diamonds, which are incredibly scarce, are used to buy and upgrade players. Player’s base characteristics are ranked from bronze through platinum. Some offer score or coin bonuses. Others offer the promise of better and more frequent power ups.

A quick word on those power ups. My strategy was to immediately upgrade the rocket power up which takes you on a mini game like ride to the upper atmosphere to collect a plethora of coins with no threats. Despite investing tens of thousands of coins upgrading this power up to 4/5ths of its potential I saw virtually no increase in the reward. This hardly made my investment feel worth the time and effort.

Simple swipe and tap commands are used to control your NBA player as you run, jump and battle alien bad guys. The responsiveness in the controls is great. This matters when the game’s difficulty ramps up and more and more threats are thrown your way as your score increases. 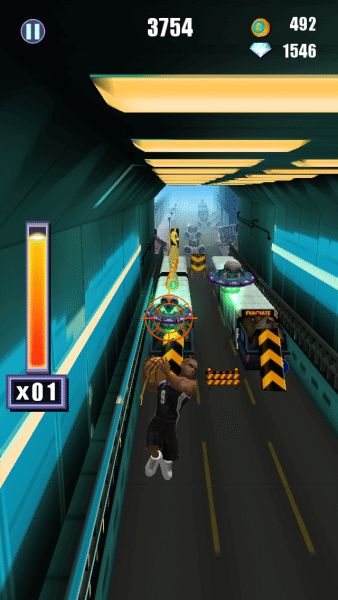 I played NBA Rush on a regular iPhone 5 and it performs just fine visually. The iPhone 5’s screen is just big enough to see enough detail on each NBA star to know who they are. There’s enough depth to the draw distance that you can anticipate what’s coming up and plan your moves accordingly. As is typical in most NBA branded games the soundtrack is hip hop based. A single track repeats over and over and over again during game play. It gets grating fast. I ended up turning the in-game music right off.

A testament to the power of the NBA brand is that this game was downloaded over one million times in the first week of its release. That’s a lot of opportunities to monetize with those in-app purchases. Although the gameplay is fun, what prevents this game from being better is that there is no end. You’re playing purely for high score. Some may like this; others may go as far as to look at this type of game as time wasting in its purest form. That’s fun time wasting to me but for the amount of time you have to invest to get anywhere in this game I’m disappointed there’s not a bigger pay off.