NBA Live 2014 (Xbox One) Review – A Few Years After the NBA Elite 11 Fiasco, the Franchise is in No Better Shape

A few years ago, EA went through a real shit-storm with NBA Elite 11. Within weeks of its proposed release date, the game was scrapped entirely after footage surfaced online that portrayed a glitch-filled affair. A gutsy decision to say the least and the perception amongst the gaming public (who will take any chance to sewer EA) was extremely negative. It’s been three years and NBA Live 14 is EA’s first offering since this all went down.

In order to qualify what I have to say here I have to admit basketball just isn’t my sport. From my youth it is just a game I’ve never paid much attention to. I’ve never played the game and, as a sports fan, I am still tinged with the soreness of seeing my home town of Vancouver get screwed by the NBA and lose the Grizzlies. Rather than attempt to fake knowledge of the sport, I have two goals in reviewing this game. To see if it can teach me more about the sport and to increase my appreciation for it. I’m not going to pretend I know the nuances of the sport enough to be critical of how this game attempts to recreate real life tactics. This isn’t a review for the hardcore players. If you consider yourself a hardcore player you will get little or no value from reading my opinions. 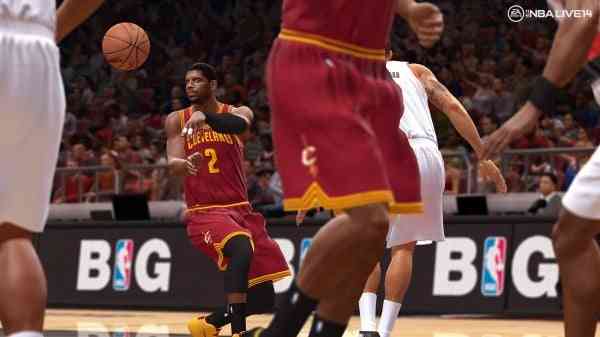 While the game is feature-rich in terms of game modes it does very little to educate non-fans of the sport or those new to the game. Case in fact is the new BounceTek dribbling mechanic. Aside from the digital manual there is nothing in the way of a tutorial. This game takes a three year sabbatical, touts a brand new control style for dribble controls and only relies on a minute long promo video to teach players how it works? Is a brief tutorial too much to ask?

Live 14’s new CourtQ AI system uses over 70 individual performance metrics for every player and team that are updated after every single NBA season game. The idea here is to bring make the game play experience as authentic to the current NBA season as possible. However, I found very little personality and differentiation between how different players and teams played. I like the idea of continually updated AI logic. It just doesn’t seem to make a lot of difference here.

I do think EA’s on to something here and NBA Live 14 integrates itself well into the real-world going on’s of the current NBA season in another of the game’s modes. Players can play a selection of Big Moments taken from actual NBA games from the day before. For example, not even 24 hours after Chris Bosh dropped 13 points in the final minutes of a Heat win over the Bobcats I can recreate that same scenario in game. There’s usually one or two Big Moments added each day. I like how this brings fresh and relevant new challenges for fans of the game. 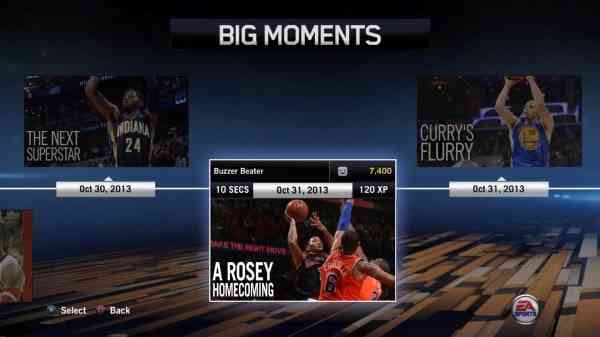 As touched on earlier NBA Live 14 also offers a good array of game modes. You can jump right in to a quick game, play against others via Xbox Live or dig in to some more in depth modes such as playing alongside the actual NBA season, playing as an up and coming Rising Star, creating and playing your own fantasy team with EA’s Ultimate Team or creating a Dynasty and digging deep into the minutia of running a team as the GM of your favourite team. This is really just EA’s standard offering of game modes but it offers enough variety to satisfy from those that just want to pick up and play to those that want to dig deep in to the elements that modes like Ultimate Team and GM mode have to offer.

Something I’ve always thought EA sports games excel at is presentation. Actually playing the game from the same broadcast perspective you see on TV is impressive. I realize this is nothing new to the series but it adds an element of realism that I find missing in games like NHL and Madden (which are played viewing the rink/field lengthwise). However, this game hardly looks “next-gen”. Sure, some player faces look like their real-world counterparts but they lack the animation and personality that you would think a new, more powerful generation of hardware would bring. The customizable soundtrack is a mix of electronic and hip hop style tracks from artists that this 40 year old had a hard time recognizing. Jalen Rose’s voice overs sound very… wooden. The play-by-play between Mike Breen and Jeff Van Gundy is passable but not spectacular.

For my interest in something to be increased, it has to be entertaining. This is where NBA Live 14 ultimately falls short for me. It seems to have the best of intentions with some of the things it is trying to do, especially the integration of the current NBA season into the game. It gets some parts (such as Big Moments) right while other parts don’t appear to be fully baked. I can’t help but wonder if it would have been better for the series to have skipped the launch season in favour of a a game truly worth of the next-gen tag next year.