I’ve heard people complain how shooters or action-adventures are all the same with little to no innovation or passion being displayed in any of the big releases, made for corporate, by corporate. But then comes along a game that is as boring, buggy and broken as NASCAR ’15 that slaps everyone in the face, and shows them what really happens when a full team of publishers and developers do not give rat’s ass about what they are making.

Last year I reviewed GRID: Autosport, I rather liked it. The game improved on its predecessor, made some dramatic changes to the handling model and mixed up the career progression, and it was all developed in a single year.

The list of NASCAR ’15 features isn’t a few technical or box blurbs, they are every single new thing that this game has to offer… and the game is still a failure.

Being a driving game fan since I was five years old, I do have a wheel – specifically a Logitech G25 – it has never had an issue running correctly on a game. In NASCAR ’15, the game at first failed to recognize the wheel’s ability to steer, after re-plugging it, steering was detected. Tiny issue, no problem, now it was time for me to configure the wheel; make some adjustments to the dead zone and sensitivity to make it so that the wheel’s calibration is as accurate and smooth as possible.

“For a game released in 2015, it does a great job looking like a game from five years ago with muddy textures, bland backgrounds and laughable animations.”

After adjusting my settings with menus slow enough to embarrass a sloth riding a snail pushing a brick, the racing was finally able to commence; to which my wheel was no longer able to turn left and my vehicle went slamming into a wall. Annoyed by this turn of events, I went back into the settings and tried to reset my wheel to the game’s default configuration, followed by the wheel’s buttons and controls get replaced by keyboard controls.

An hour later, new cracks on my desk were visible, my hands were bleeding and no progress had been made, so I thought it would be a good idea to maybe give in and use my Xbox controller. Despite respecting the game’s choice of not letting me use my device of choice, it denied my second option as the Xbox controller settings appeared with no button’s detected. Due to this, I had to commit an act of Satanism, and use my keyboard to play a driving game; the keyboard that for the time being, worked.

Disappointed, I entered Career mode and began my first race, the green flag at Daytona was dropped. For a game released in 2015, it does a great job looking like a game from five years ago with muddy textures, bland backgrounds and laughable animations. 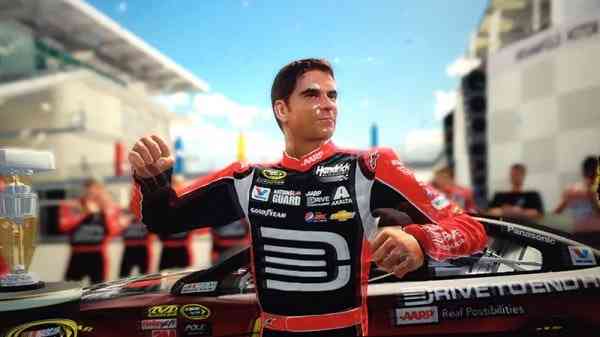 Not that I had time to think about that in the heat of the moment because when the game finally recognized my Xbox controller, I was halfway through a turn, ‘causing my vehicle to steer into a wall and crash. This experience went from disappointing to depressing.

As I’m writing this, I’m trying to think about what the dev team was doing for the past year, because if it was not to improve graphics, compatibility or menus, what have they done? Well, I suppose they must have spent many days and nights improving online play to make it as smooth and fun as possible, too bad that nobody – on PC – is playing it online so I can find out.

Going back to Career mode, you quickly realize that it’s essentially a NASCAR playlist, you collect sponsors that give you money and you upgrade a few parts, but that’s it. There’s no different series of NASCAR, such as minor leagues, trucks or modified; there’s no real team management, respect, rivals, friends, skill points, share draft, prestige points or challenge scenario mode… in other words, nothing from NASCAR games released ten years ago!

So what about the driving? The game is laughable in just about every other area, this is the one thing it has left. Well it’s okay. That’s all I can say, it’s not bad, it’s good, it’s just… meh.

“That cheat sheet on the bottom of everyone’s screen already makes the game too easy and kills any tension that racing in a pack would otherwise have.”

Handling feels wooden and unresponsive – which is saying something being that this is a NASCAR game after all – but it’s not a big deal because once you figure out the racing line, it’s a cakewalk to pass other drivers unless you crank up the difficulty.

The A.I. doesn’t seem to have any spatial awareness, they will constantly drive into without any intention or purpose. But here’s what really blows my horn, on the bottom of the screen is a display that shows you cars that are in your proximity and you have a Randy over the radio telling you where these cars are. Why do we need both!

That cheat sheet on the bottom of everyone’s screen already makes the game too easy and kills any tension that racing in a pack would otherwise have. So why can’t we turn it off!? You know what you can turn off? Randy on the radio giving you the exact same information but would’ve been at least slightly more realistic! 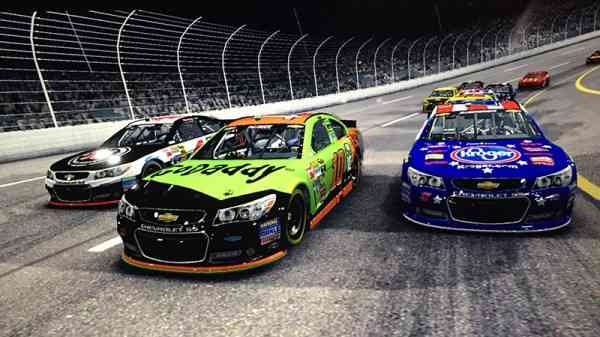 And turn him off you will because nearly everything about audio that has nothing to do with cars is dreadful. All the in-game voices sound like Larry the Cable Guy and the soundtrack repeats the same puke worthy trash in the same order every single time you launch the game.

If you are looking for a racing game to buy, do yourself a favour and buy anything other than this! Project CARS, Assetto Corsa, or even Sonic All Stars Racing would all be much better options. Heck, go dig up your PS2 or Xbox and play EA’s NASCAR games, as you will have more fun than you would with this horrendous driving game. It is unfortunate the franchise has come to this but at this point NASCAR ’15 is a game you are best served to avoid.