MXGP: The Official Motocross Videogame Review – Not Exactly a Next Gen Powerhouse

With media coverage extensive as it is these days, it is increasingly rare when a video game comes out where I am able to approach it with absolutely no preconceived impressions. Such is the case for MXGP. The last two wheel racer I’d played was probably something in the MX vs ATV series a console generation ago. Unlike the MX vs ATV series, MXGP is a decidedly realistic take on the sport of motocross with the focus purely on racing. Sure, with the game hitting PS4 back in October we’re a little late to the party but you know what? Once you get the hang of things, its pretty fun.

For those not in the know, MXGP represents the official Motocross World Championships. In the game there are two classes: MX2 and MX1 (the latter having larger engine displacements) and it should be noted this game represents the 2013 season, not the most current one. If you are familiar with the F1 games from Codemasters the career mode will feel familiar. You are free to sign with various, real-life teams in an effort to make your way on to the champion’s podium. It isn’t as intricately detailed as say the F1 series but full race sessions are represented with both practice and qualifying sessions before the race and various spot challenges throughout. A full complement of game play modes accompanies the main career mode including Instant Race, Grand Prix, Championship, Time Attack, and online Multiplayer. 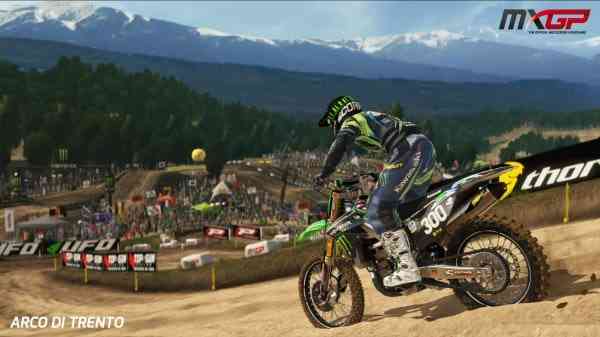 In multiplayer, there are options for single races or a full online season. Up to 12 players can play online at any one time but unfortunately there doesn’t seem to be an abundance of people online to play with. Of the few lobbies I found at any one given time when looking for a game online, games were rarely full and several were lobbies with just a single player. I guess this speaks to more of a niche nature to this title.

Since the bulk of my racing experience comes on four wheels the learning curve of not only the bike handling but also how to race competitively on said two wheels was more difficult than I anticipated. Not only do you have both a front and a rear wheel brake to manage, you also have independent controls for steering and rider balance. Heck you can even ride with a full manual transmission if you want. This all important because of how your rider’s weight affects how your bike handles on the track. Improper balance can easily toss your rider from his perch atop the bike. This all can be quite a handful for those that are just starting out however there are good options to toggle these all on and off. Novice through to hardcore players should be able to find a good balance of settings that work best for their preference.

Apart from a novel first person camera angle that does a fun job of conveying the ferocity of what a rider endures, MXGP doesn’t do a ton to impress visually considering the powerful platform of the PS4, on which we are seeing so many gorgeous games. There is plenty of clipping through objects such as the track side markers and riders often sink into the dirt like its mud when they fall. Tracks in open areas don’t exhibit a lot of popup, which is nice, and several tracks feature some nice topography. Hills and elevation are prominent as are the various ruts and race lines on the track itself. While it is claimed the track surface is dynamic it was very hard for me to actually see. Regardless, the variability in the track surface and various, distinct racing line options totally do affect the handling and balance of your bike and rider. 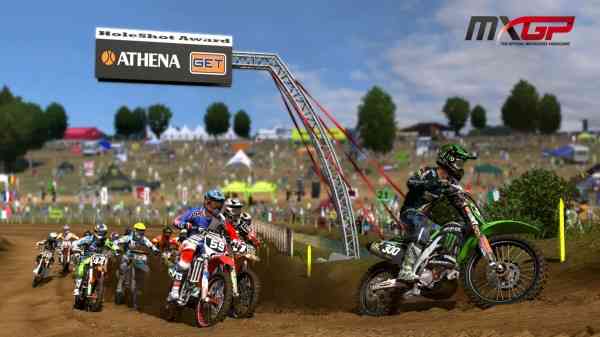 There is a positive side to the clipping issues I mentioned. When you are up against a full field of 22 riders (something I understand the PS4 version offers over previous versions) things can get pretty hectic on the track. There’s a certain degree of forgiveness here which may not be ultra-realistic but certainly appreciated by me. I sort of expected to see the frame rate slow down some what at the beginning of faces but even with so many other riders on screen the frame rate impressively stays steady

In pretty much every racing game I offer my opinion on I comment about the genre not lending itself to extensive discussion about how the game sounds. Here is no different. Milestone went to extra lengths to improve the fidelity and 3D width of the sound but I have no frame of reference to compare it to (as in previous versions of the game on the other platforms for which it is available). That said, it sounds like I would expect a motocross game to sound like. Engine sounds are realistically represented, there is no commentary per se but I noticed environmental effects from the crowd to be rather prominent. Should any of this sway your decision to buy this game in one direction or the other? No, its just observation.

A title like this can be easily overlooked with a discounted price, featuring a sport perhaps many do not know much about and no real marketing push but MXGP is actually a pretty thorough exhibition of the sport of MXGP. It’s decidedly more realistic take on the sport of MXGP may not endear fans looking for a more over the top MX vs ATV like experience but fans of the sport of motocross should enjoy this.