MX vs ATV All Out Review – Familiar Full-Throttle Fun

MX vs ATV All Out Review

Motoring down the hill toward the big jump, I rev the throttle to max speed. When my bike goes airborne I do a frontflip, my rider shifting one leg to the other side. I make two full rotations and get back into a riding position on the descent…only for the bike to keep leaning forward, sending my rider flying to the ground. I should be mad I didn’t complete the trick, but instead, I’m laughing at the goofy crash animations. This is MX vs ATV All Out in a nutshell, and I’ve enjoyed playing it despite wonky issues like the scenario above.

MX vs ATV All Out plops me into a giant open farmland right from the jump. I start on an MX motorbike, but a quick trip to the garage menu allows me to switch to ATV whenever I want. This is great for new players, a “sandbox” filled with hills and ramps and other obstacles to maneuver. The controls are simple enough that I learn them fast, but mastering them takes a bit more effort. Thankfully the controls are the same for both MX and ATV, so I don’t have to learn two sets.

The trick controls are where things get weird, as they inadvertently contort my hands in unnatural ways. All I want to do is show off while in the air, but my fingers just don’t bend that way. My hands, sadly, are not Cirque du Soleil contortionists, so some tricks just aren’t going to come naturally to me. While Tony Hawk’s Pro Skater from my youth this is not, eventually I wrapped my head around it.

“This is great for new players, a “sandbox” filled with hills and ramps and other obstacles to maneuver.”

This open farmland also walks me through the game’s different competition methods by littering it with tutorials. Freestyle is absolutely my favorite, as it’s five minutes of me trying to do as many tricks as possible. I’m not good, but watching my rider crash and flop around is entertaining enough that I don’t get angry. There’s also SuperCross tracks with multiple hills and sharp turns, National tracks through wooded areas, and standard OpenCross tracks. I can use any vehicle I want in each tutorial (though I prefer the ATV), which is pretty cool. All I have to do is drive to a waypoint and press the Pause button to start. It’s as easy as it gets and I appreciate that.

What’s not as easy to find, strangely, is the non-tutorial versions of MX vs ATV All Out‘s events. There’s no marker in the world to find, no access point to initiate a race like other games. Instead, I have to pause the game and head to the Events part of the menu. There are full Series, single events, Online races, and time trials available to me, but only in this menu. It’s a weird place to put an integral part of the game, made even more mind-boggling by the lack of access in the open map. 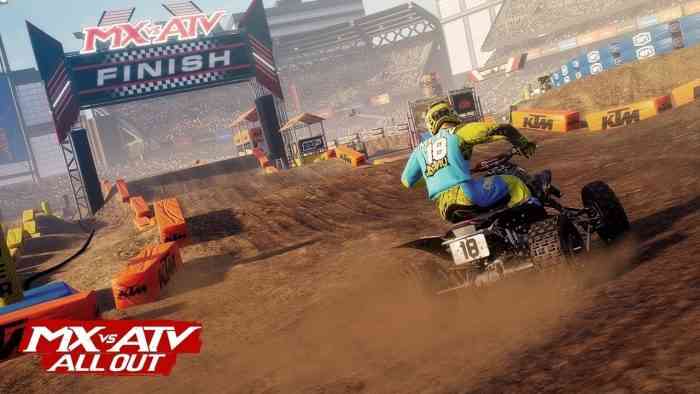 There’s another downer to these structured events: I have no desire to play them. I start the game in a free and open world, allowed to go crazy and drive at will. The idea of then transitioning to a normal race sounds…well, boring. These races aren’t without incentive, as I can earn me in-game currency for upgrades. However, I’m still confined to a certain area, limited in scope to the rest of the farm. The small tastes I got during the tutorials of going “off-track” and being forcefully reset soured me. Why would I pursue it on my own? I’d have chosen a Single Event from an opening menu, but by immediately throwing me into free-roam the rest just sounds dull.

One thing MX vs ATV: All Out does well is create a sense of nostalgia, whether it means to or not. The game feels a lot like previous installments, which will bode well for old loyalists but doesn’t do much in the way of innovation. The licensed soundtrack is incredible, and it includes “All I Want” by The Offspring in an (un?)intentional tribute to Crazy Taxi. All crash animations accelerate by tapping B, immediately hearkening back to mashing buttons in Excitebike way back when. These old-school sendoffs put a smile on my face, although I’m not certain Rainbow Games intended.

MX vs ATV All Out is a technically sound, fun little racing game that does its name’s legacy proud. I understand if some feel the game’s a little too rooted in the past, as the bulk of the game does not innovate. Still, jetting around the open farmland is great, catching big air and doing a sick trick is fun, and crashing is hysterical even if it’s not supposed to be. I enjoyed revving the engine of MX vs ATV All Out, I just wish it performed like a new 2018 model instead of an older model with a new coat of paint.