Dead In Vinland is a sequel of sorts to the management/survival/RPG Dead in Bermuda. I never played the original, but now I am desperate to go back. That’s because, short of a few easily patched-in features, Dead in Vinland is close to being an indie PC masterpiece. More than that, it’s a gaming experience not quite like anything else.

You start Dead in Vinland as an exiled family of four. There’s Eirik, the stoic, guilty patriarch. He has a talent for violence but wants to live a life of peaceful fishing and woodcutting. Then there’s his wife Blodeuwedd, an intelligent and optimistic woman from Wales. She’s got a sister, Moira, who’s an accused witch, wise in the way of herbs and ancient lore. And finally, there’s Kari, a young girl with a nasty attitude who just wants to hunt with her bow all day. As you progress through the game, there are a dozen or so other characters to meet and recruit who can join your camp in different combinations.

What surprised me with the characters in Dead in Vinland is how richly drawn they all are. Most of them are deeply flawed, and at times unlikable, but I found myself becoming more and more committed to their survival. Moira is sympathetic, but sometimes her sense of humor is downright nasty. Eirik is such a sad sack, but you would be too in his dire situation. The written dialogue isn’t always Pulitzer Prize-winning quality, but it does a great job of conveying the personality of the characters.

You manage the family and their allies over three-turn days. Each turn, you send every member of your camp to perform a task—research, woodcutting, exploring, collecting food or water, resting, cooking—there’s a whole bunch of things that need to get done. Performing tasks isn’t just a matter of watching meters fill up, it’s a delicate balance of a character’s inherent skills, growing experience, and stats management. Cutting wood by yourself ups depression and fatigue. Some characters have a lot of woodcutting experience and do it well, but others aspire to do it better and get bonus XP, which can be spent on perks and combat bonuses. 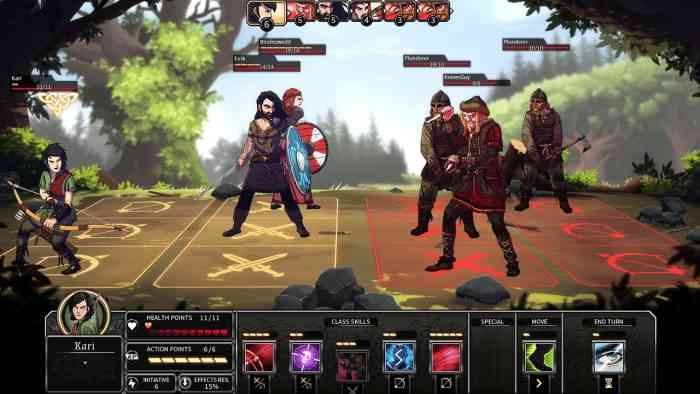 There’s such a delicate balance of systems that the camp feels truly alive, and the stakes dire. You’ll feel like you have things under control, only for an enemy to break somebody’s legs, or for a storm to blow over your water barrels, which leads to amusing chain reactions of collapse. The game is sophisticated enough that one mistake doesn’t lead to a game-ending dead end. Perhaps a character gets too depressed to work, so you ply them with alcohol, which makes them feel better but in their drunkenness they injure themselves. Now they are pretty depressed and pretty wounded, but alive. You push forward, hoping for a lucky break.

As a management game and as an RPG, Dead in Vinland shines. There are enough different outcomes that I have started three different games to see different character combinations. Therein lies the big flaw. There are long dialogues for every event that occurs in the game. That’s fine at first, but on your third playthrough, you kind of want to skip Moira’s explanation of fruit harvesting. You can’t. You just click as fast as you can and put on a podcast or something until you’ve gotten through it. There’s a lot of moments that become a slog as you play the game multiple times. A skip dialogue button would go a long, long, long, long way.

“There’s so much to discover, such good management gameplay and deep character interactions.”

This also applies to combat. The game has a simple animated style, which is very well done, but there are limited images to see. In combat, which is also well designed (a sort-of take on Darkest Dungeon) things can get really slow, and there’s no way to speed things up. This too can turn the game into a slog.

But there’s so much to discover, such good management gameplay and deep character interactions. Despite some slow moments, Dead in Vinland is worth it. I want to put in the effort, because I want to discover the secrets the island has to offer and whether or not characters will start romances. The problems it has are pretty glaring but easily fixable. In the meantime, Dead in Vinland is a game with elements from many of your favorites, but it all comes together as a unique final product. I know I will be starting it up every few months until I know every monologue by heart. 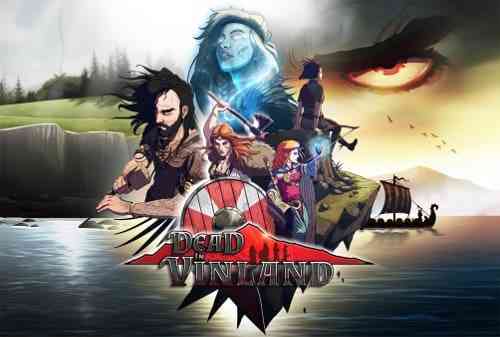