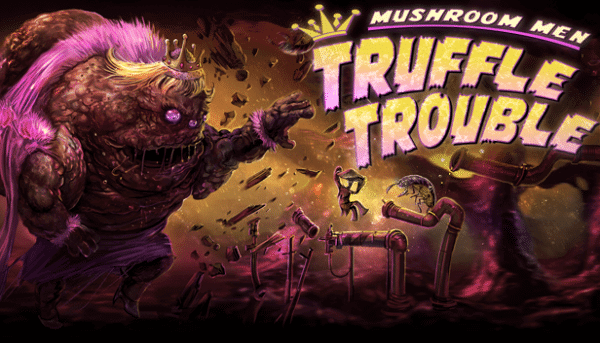 There are some basic ingredients found in the recipe for every good platformer; the controls are familiar, the objective is simple but innovative, and it makes you want to keep playing. Using this simple formula we can quickly rule out many of the good from the bad. Mushroom Men: Truffle Trouble has bright spots that follow this tried and true recipe very well but in others you’ll find manure where they should have added a little sugar (GUYS, IT’S A MUSHROOM JOKE… GET IT!?)

Alright, so my horrible jokes aside it can’t be said that MM:TT doesn’t have some good things going for it. As soon as you start it up, you’re treated to a lovely animation roughly explaining the plot of the game. You play as Pax, our little mushroom protagonist. He’s enjoying an evening by himself in his tiny house when a heart shaped love letter falls from the sky, landing near his home. Upon reading it, horror of horrors, he discovers it’s a love letter from an unknown admirer. Disgusted and horrified, he proceeds to toss it in his furnace, never to be seen again. Unfortunately, his wild imagination (you wouldn’t believe what goes on in the mind of a mushroom) creates an image of his desperate lover from afar and it’s not pretty. Imagine Honey Boo Boo’s mom and Jabba the Hutt genetically spliced together, cosplaying as Princess Peach. This… err… ‘Princess’ is our main antagonist, as she chases Pax through his nightmares crying out for her ‘Paxy-poo’.

Jumping into the game you’ve got your basic platformer controls; jump, sprint, pick up, pull/push. Your goal in each level is to escape the imaginary princess as she crashes through stones and bricks to hold on to her Paxy-poo and squeeze him to death. You can move some blocks and bounce off others, you just need to clear a path or create a ladder with bricks and do whatever you can to get back into your bed at the end of the level and escape the horrible nightmare. But here’s the thing, unless you’re using a gamepad, the controls are really awkward. The layout on a keyboard is so tricky to use, I found myself borrowing a friend’s gamepad to make going through the game tolerable. This isn’t terribly surprising seeing as it’s a platformer but I’d caution against trying to play this on a keyboard unless cramped up fingers are something you enjoy.

The levels start out simple and they flow pretty well, the tutorial helping to explain some of the transformations that Pax can enter, and some other important tips such as sliding down ramps or climbing along ledges. Unfortunately, it doesn’t stay that way and soon the levels become near impossible. The once easygoing music becomes fast paced and very hurry-up-ish, your mind starts screaming at you to mash all the buttons and before you know it, you’re caught by Pax’s disgusting devotee. It may have just been my terrible puzzle solving and platforming skills but it seemed extremely challenging to me and the difficulty ramped up very quickly. 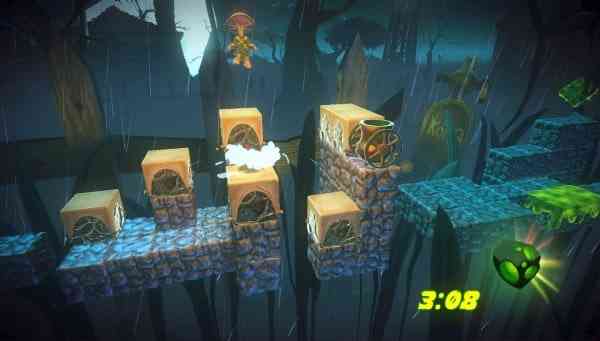 Seeing as you spend every level escaping your aggressor you get used to hearing her shriek in the background. Imagine the gingerbread man from Shrek screaming at the top of his lungs “PAXY-POO, WHERE ARE YOU?!”, “I’M GONNA NEED A FOOT MASSAGE AFTER ALL THIS RUNNING!”, “LET’S GET MARRIED!”, “WE’RE GOING TO HAVE SUCH BEAUTIFUL BABIES!” These remarks may start out somewhat humorous in the first few levels, but not too long after they just start to be repetitive, and even obnoxious. I’m not exaggerating when I say she keeps saying the exact same things over, and over again. It’s one of those times it’s appropriate to scream at the game, telling it to shut up.

Aside from the sad attempts at loving screams, the background music was actually really nice. It’s got an ethereal sort of sound that really reinforces the idea that you’re playing in a dream. I’d go as far as to say I quite enjoyed the music in this game. I’ve already mentioned this, but when the Princess gets closer to you, the music picks up the pace and really does make you panic a little. It might be pretty catchy but it’s not the music you want to hear if you expect to beat the level.

Mushroom Men: Truffle Trouble isn’t going to be winning platformer of the year but it was hardly the worst I’ve ever played. While it has a lot of positives going for it they don’t add up to enough to make the game truly good. Odd difficulty spikes alongside a narrative that never really goes further than ‘Hey, I’m being chased!’ can make the game either frustrating or downright boring at times.

Next Fossil Fighters: Frontier Review – Someone’s Got a Bone to Pick With You
Previous Scram Kitty DX Review – Look What the Cat Dragged In