Fossil Fighters: Frontier Review – Someone’s Got a Bone to Pick With You

The latest instalment in the Fossil Fighters series for the 3DS is here, aptly titled Fossil Fighters: Frontier. Digging for dinosaurs has always been for those scholarly type in those sandy-green coloured cargo pants and vests with lots of pockets, but Nintendo gives the “regular-Joe” a chance to play in the dirt, virtually speaking. So, looking for some time to do some dino-digging and dino-fighting?

Right from the start you are treated to a cut scene featuring two characters battling it out using huge dinosaurs, so you know that this game is not a traditional type of affair. Afterwards you select your character (Male or Female) and are taken through a tutorial where you meet others just like you who are starting their careers as Wardens. Wardens are individuals whose duties are to care for the various parks within the game. Why do I speak of this, well, as someone who is unfamiliar with the series I found that this introduction really helped me as I was able to understand more about how and why I was going to play and it allowed me to pick up and play this game without any confusion.

Very quickly you’ll learn the various tasks that you will need to master in this game. These tasks consist of reviving of fossils and battling. “Revival”, which means to resurrect excavated fossils into living dinosaurs, results in “Vivosaurs”, which are resurrected dinosaurs of course. You use your Bone Buggie to travel around various dig sits to search for new fossils to dig up. There are a variety of different Bone Buggies which you will encounter, all with different features, so it is important to take note of these depending on the island that you are visiting. Finally, all your revived Vivosaurs then can compete against others in contests which are called Fossil Battles! ROOOAAAARRRRRR. 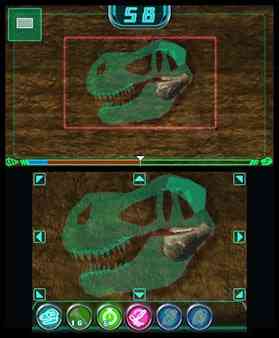 Digging up fossils was a lot of fun. You ride around the area in your Bone Buggie, and then using the handy map are able to see where a fossil might be hiding. You use your scanner to scan the area a fossil might be located and extract the fossil. A timer is set and then you are able to use a variety of tools such as a hammer or a drill in order to extract the fossil. The extracting screen also provides you with a guide as to the shape of the fossil so you know where exactly to chip away the rocks. Of course you’ll be using using the touch screen and 3DS stylus for all of this. Once the timer is up, you will receive a rating on how well you did and receive the fossil. It will also provide a few stat details such as what specimen it is and the type.

A feature that was extremely helpful during gameplay was that the map was always on the bottom screen of the 3DS which made getting around much easier. Characters tell you where you have to go next, and you just follow the clean and simple map. Fossil Fighters Frontier takes advantage of the duel screens of the 3DS with text, maps, and items laid out in a convenient manner which made it easier to find what I needed and where I was going. It’s always enjoyable when games manage to lay things out in a manner that helps, not hinder your gameplay experience.

This takes us to the battling aspect of the game. By collecting fossils you are able to revive the dinosaurs and use them in battles against other characters and other players, including online using the Nintendo Wi-Fi network. During each battle you are able to select your Vivosaur and the various attacks that they know. The battle consists of rounds, where in each round you use an attack against your opponent as well as them using one against you. But do not worry, you are equipped with moves at allow you to regain your LP, which is your health in the game. As you gain experience from each battle you receive points, and as your points increase your Vivosaurs rank goes up which in turn makes them stronger. In other words, the more you battle the stronger your Vivosaurs will get! Another way to fight Vivosaurs is by catching up to the various rogue ones which can be found wondering around a stage, so be sure to find and secure them. It is the duty of a Warden! 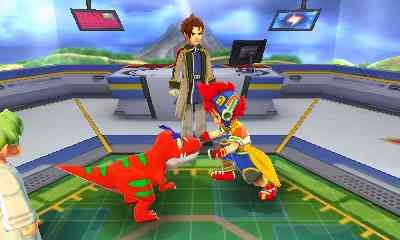 The character design is a very nice anime style. Character animations are unique and allow you differentiate each one from one another. Vivosaurs are extremely creative and their bright colors and animations make it hard to choose which one you want to use in battle because they are all unique in their abilities. This in turn, creates a level of strategy as to which Vivosaur to use against which enemy. Who knew that colour would be so important in a game that involved resurrected dinos eh? Overall the visuals are not what one would call “the best” looking game, but is far from lousy and most should enjoy what is on screen.

On the audio side of things, the music fits the tone of the game with upbeat tracks when you are walking around Walden HQ or taking your Bone Buggie out on an excavation run. The opening track can be a little cheesy but it has a sort of charm to it. Music when you are battling can get intense to go with the weight of the battle and there are a variety of Vivosaur sounds. Not bad at all, and of course even better through a set of headphones.

Overall, Fossil Fighters Frontier is best viewed as a roleplaying monster type game with a Jurassic Park feel, which is a good thing. Of course there is a targeted audience too, but it’s not just for kids, but those that are a kid at heart too.  If you are new to the series do not worry, everything is explained and it is easy to pick up and play. The creators have a developed a unique world for this game, the variety of Vivosaurs and ability to customize everything allows for some personality and replay value, and overall the game is fairly enjoyable. On a more personal note, it kept me coming back to see what other fossils I could find, so that counts for something too.

***This game was, of course, reviewed on the 3DS with a code provided by the publisher***

Next Etherium Review – Space Monster Eggs That You Use to Buy Things
Previous Mushroom Men: Truffle Trouble Review – The Trouble with Truffles