Etherium Review – Space Monster Eggs That You Use to Buy Things

The Real Time Strategy genre is long standing and well represented. There are tons of these games, and there are tons of good ones. So any time there’s a new RTS game it already has some tough competition. On top of that, the genre has historically had a little tougher of a time telling compelling stories than, say, a shooter. It’s just harder to get emotionally involved with characters when they’re a centimeter or smaller on your screen. So it’s hard to differentiate a new RTS based on its plot or characterization, and most of the time each new one is just a reskinning of a previous one, with some minor upgrades in graphics. Only occasionally does one of these games try to change something significant about how the genre works.

Etherium falls somewhere in the middle. There’s a lot of familiar territory and some attempt to move in new directions, but nothing particularly ground-breaking. To some extent that’s a good thing – to be successful in such a specific genre you have to do the expected. There have to be units, there have to be resources of some kind, and there has to be a map over which you’re fighting for control.

Etherium opts for squads of units rather than individual ones, as many other recent RTS games have done. This is mostly a cosmetic distinction, though it does mean that it’s a little more difficult to keep track of how many units you actually have. Each squad can lose units and can be reinforced, but it’s up to you to notice that you need to do that, which involves looking at the actual in-game models and trying to remember how many there were in the first place. 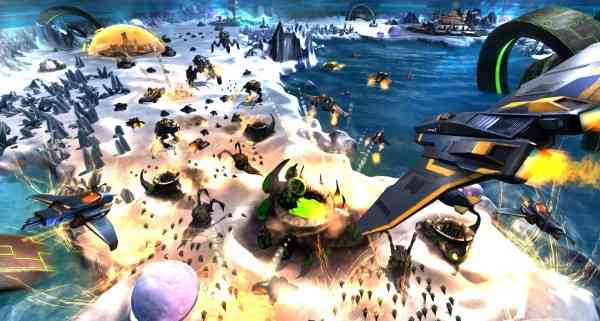 The only resource in the game is etherium, an intentionally mysterious substance harvested from the eggs of some sort of species of “extra-dimensional creatures.” It’s unclear why that’s a good thing, but as with most games of this sort you’re not asking questions. Etherium is used to buy units which are drop-shipped from orbit and to upgrade structures.

And of course there are three factions. It’s difficult to avoid comparing them to a certain other industry-defining space RTS game, as the three factions can best be described as “industry-focused humans,” “adjudicating omnipresent aliens,” and “mysterious creatures.” Unlike that other game, though, these factions mostly only differ cosmetically. Everyone more or less builds the same sorts of bases, and while there are different units with slightly different abilities, they’re generally pretty similar.

That similarity is part of my biggest gripe with the game, which is a sort of overall lack of identity. In addition to the factions not feeling very different from each other, the units themselves are hard to distinguish because you’re dealing with squads. The individual objects in each squad are small and unidentifiable, surrounded by a blue circle. There’s an icon above each squad, but the icons in the game are very abstract and similar-looking. Does the circle with a half circle underneath it represent resources or is it the circle with a crescent shape inside on the left? Which one is a scout unit? Or maybe it’s the circle with a crescent shape toward the bottom. No, that’s the sell icon. 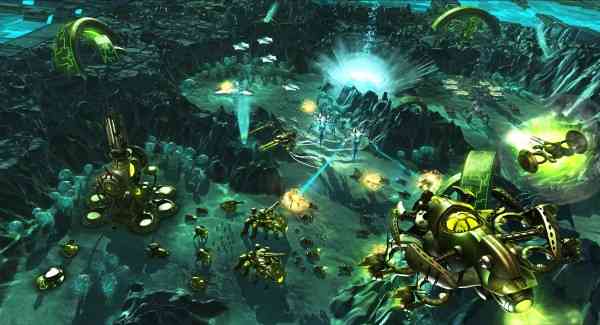 When you look at everything together, it all looks nice and stylized, and there are of course mouseover tooltips, but the actual usability suffers. The entire interface is black and white on blue, so there aren’t a ton of ways to make the icons look like what they represent. But abstract symbols aren’t easy to recognize until you memorize what they all mean. Maybe this is minor and just part of the learning curve of a new game, but it makes that learning curve feel like pressing random buttons to see what happens. And it doesn’t do anything to construct a sort of world worth caring about and sinking some serious time into to learn the game.

There is a fair amount of complexity on top of the game’s basic structure. There are three different phases, or seasons, that determine how the etherium behaves on the map. During the laying season it randomly appears in new zones, during the gestation season nothing really happens, and during the hatching season some of the spheres can’t be used. There’s also weather, which can reduce visibility or damage units. And there are mercenary units you can recruit by converting subsystems on your structures.

Gameplay itself seems to focus less on quick reactions and constant micromanagement of units and more on knowledge what’s important and being able to build the right things at the right time. This presumably comes with significantly more practice, as the “tutorial” simply tells you what the buttons do (which, as mentioned above, is not a trivial task). 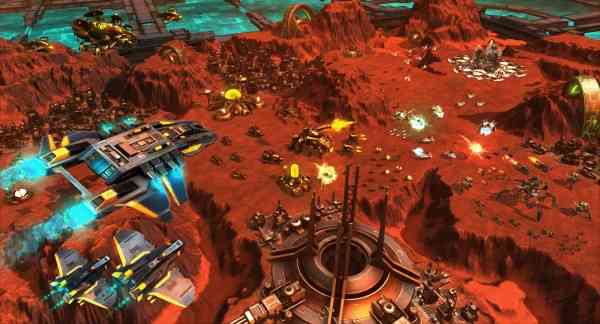 One interesting element of Etherium is conquest mode, which turns the actual RTS gameplay into a sort of sub-game of a larger turn-based galaxy conquering game. In this mode you command starships which move between planets and attempt to gain control of them by either landing on empty ones or invading occupied ones, which then begins a skirmish in the RTS mode. There’s also a research tree for the entire conquest, and you can conduct espionage which gives you missions with rewards. It’s an interesting way to add depth to the typical repetition of RTS gameplay, though there is no storyline to speak of and it remains to be seen how dynamic it can really be. At the end of the day you’re still just battling a lot.

After all of that, for a game like this which appears to be aimed solely at a competitive multiplayer audience, it’s really a matter of how many people are playing it and what the metagame ends up looking like. If there are imbalances in multiplayer, how quickly are they addressed? How are they addressed? How healthy is the community? How quickly can you find a game? All of these questions can’t be answered simply by playing the game once or twice, definitely can’t be answered before it releases, and are dependent on a sort of ephemeral quality that some games have and some don’t. I think there’s potential, but there’s not quite a resounding reason to play this RTS over the dozens of others. 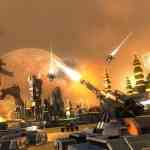 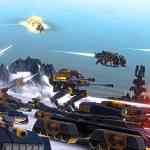 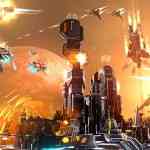 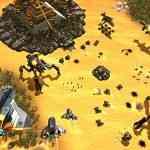 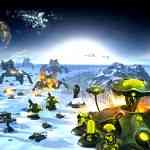 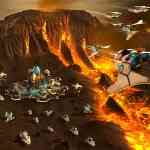 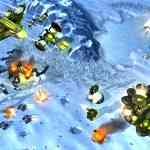 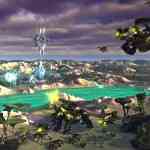 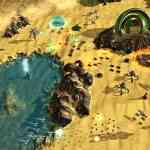 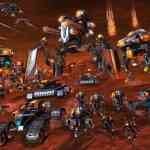 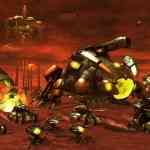 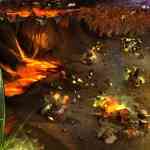 Next Bladestorm: Nightmare Review – Sure, it’s Not a Nightmare, but it’s Far From Dreamy
Previous Fossil Fighters: Frontier Review – Someone’s Got a Bone to Pick With You