Bladestorm: Nightmare Review – Sure, it’s Not a Nightmare, but it’s Far From Dreamy

When you think about the Hundred Years War, chances are it’s mostly a foggy recollection of something from history class long gone in the hazy past. Ironically, outside of a few highlights, that’s pretty much all there is to remember from that time. With this in mind, to make it the setting of a Japanese action strategy game is an interesting choice if nothing else. Bladestorm: Nightmare tries to remedy the futility of this conflict by infusing anime designs, fast paced action and fantasy elements into it, but sadly, it ends up being very similar to the War itself – a few highlights but without much else.

Nightmare is partly a remastered version of Bladestorm: The Hundred Years War with an all-new campaign, obviously titled Nightmare. The game itself will make you immediately think of Dynasty Warriors as the Musou style is trod out with a few bells and whistles to make it seem like it isn’t. Setting the game in Europe is obviously the biggest choice to mask this, but having all of your characters be Japanese and having anime style re-imagined European royalty kind of defeats the purpose.

You play as a mercenary who remains neutral during this conflict, siding with whomever can pay you the most. You create your mercenary to lead a squad into battle with a rather in-depth and detailed character creation that is on par with the best character creates out there right now, minus the drastic lack of accessories for some reason. There are a myriad of squads that you can choose to specialize your mercenary in but they are ultimately broken down into swords, spears, clubs, bows and horses. Each unit has its own attacks and are better at combating certain units but weaker against others (paper, rock, scissors anyone?). For example, spears are great against cavalry but bad when it comes to swords. You can also tag team with another merc to aid you as you wade through the field of battle, either with another merc you’ve built or online with another person. There are also items to pick up that help you in the field, new armour and weapons to purchase, and tomes to help you improve your units and to discover new moves for them.

All of this, however, is completely unnecessary. If you’re even halfway competent you can plow through the first few missions with relative ease and then you can simply use all the experience to level up one particular unit and you’re good to go. I chose to use swords since I’m more of a melee kind of guy, and by my fifth mission I had my swords leveled up over 20. Minus some troubles with charging horses, which were really only a problem during the first wave, no one on the field could stand against me. Even the missions that were rated difficult were a breeze, to the point where I would spend time clearing out the entire area before completing a mission, racking up XP and items which just added to me being far superior when compared to my enemies. While I did really enjoy using whole armies as fodder for my troops, it did become a little too easy as enemy strongholds could only withstand my attacks for about a minute before I conquered them.

The actual story to the game is practically non-existent. Yes, this is a game set in a historical period but there’s more history in the captions of a textbook than there is the entirety of this game. You’re stationed in a tavern where you can purchase things, level up, get contracts and talk about the events of the war with other mercenaries and the tavern’s owner. These conversations pass for what’s supposed to be a story while characters feed you tidbits of information in what is easily some of the worst accent work I’ve ever heard. You’ll find a constant source of this in a comical over pronunciation of the word ‘mercenary’. You can choose to fight for either side or both sides depending on how much money and experience you’d like to earn, but this ends up in some of the most futile playing imaginable. For instance, fight with the British and help them conquer an area, then fight for the French and drive the British out of said area, repeat for every new battlefield you unlock. I eventually ended up just sticking with the British since they paid me more per mission, but flipping sides also made what little storyline in the game instantly redundant and very boring. 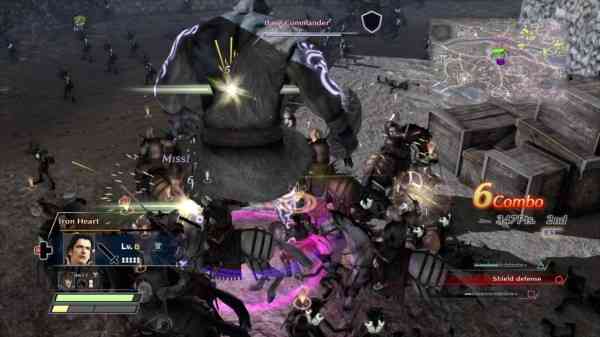 The addition of the Nightmare campaign takes the Hundred Years War scenario and turns it into an anime fantasy mash up that introduces demons, dragons and magic into the missions. It is slightly more difficult but not by much, still rather easy, but now you can slaughter demonic minions wholesale as opposed to humans in different coloured armour. The mission clock is also removed which makes the missions longer and adds to the difficulty, and ultimately makes it a more enjoyable experience. Sadly though, the controls and actual gameplay stubbornly remain the same, which ends up with it being repetitive fairly quickly.

Overall, Bladestorm: Nightmare is a game that is entertaining for a time but it will ends up becoming stale if your session goes on too long. The addition of the Nightmare campaign adds a solid chunk to the gameplay length, as well as some enjoyable new elements, which are a welcome addition to a game that can’t seem to make the best use of its setting or style. While you will enjoy playing Bladestorm, it ultimately ends up being an previously released game that’s getting a new-gen “fresh coat of paint” release with a limited update that, while not being a nightmare, is definitely not a dream.