Scram Kitty DX Review – Look What the Cat Dragged In

The current rage for retro-inspired games continues unabated – as does, sadly, the age-old cat vs. mouse rivalry.  So Dakko Dakko’s Scram Kitty DX comes not a moment too soon, combining the thrill of kitty-hostage-rescue with a hearty-helping of nostalgic fun.  Debuting on the PS4 and Playstation Vita in an enhanced version after a successful run on the Wii U (and reviewed here last year), is Scram Kitty DX the catnip gamers have been waiting for?

Well, let’s start with Scram Kitty’s basics.  The game is hard to categorize, but it has elements of platforming, shooting, and puzzling in it.  You play as Buddy, a boy in a mech-suit who rides on magnetic rails through a space station, on a mission to save cats from a bunch of evil mice-captors.   You can shoot lasers, jump, and move in all directions within a 2D environment.  And when I say all directions, I mean up, down, and side to side, as long as you stay magnetically-attached to the rails.  Jumping can be a single jump, to get over obstacles, or a double-jump, which sends you much farther off the rails (and turns you into a fireball for some reason).  If you double-jump far enough, you can land on another rail-surface, such as one above you, and in this way you can bounce around through the game’s levels pretty handily once you get the hang of it. 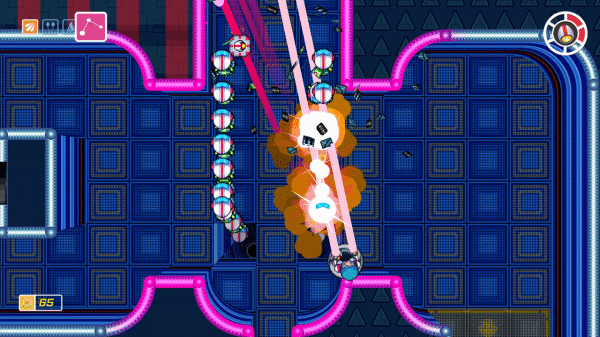 Controls, although strange at first, do eventually become comfortable.  Scram Kitty’s 4-direction movement is certainly a novel idea.  You literally have to push up with the stick if you want to go up a curving rail, and then swirl the stick with your thumb to go around a hump – you can’t just push right the whole time and expect it to follow the contour on its own.  Shooting, which you have to do sometimes to exterminate the evil mice holding all the cats hostage, can also be tricky, as you shoot in whichever direction is “up” for you at a given time.  This means a lot of moving back-and-forth, trying to shoot an enemy who is coming at you slowly, all the while avoiding his return-fire.  If you get desperate, the double-jump-fireball thing can give you one more chance at survival.  I can’t say I ever loved the game’s mechanics, but I got to at least understand them after playing for a bit.

And learning Scram Kitty is made a bit easier by the game’s 4-stage introduction, which serves as a sort of Tutorial, albeit a very silent, minimalist one.  This beginning part of the game is as relaxing as being licked awake by kittens, as you learn what you need to do to get one, two or more cat-stickers and open the next airlock on the station.  What you find, after playing these first few levels, is that there are, essentially, many little games in Scram Kitty’s stages, all rolled together.  Collecting all the Gold Coins gets you one cat; defeating a sort-of “Boss” mouse gets you another cat; maybe you corral a third cat who is stranded and boot him to safety.  How many cat stickers you get is up to you, although some stages demand more cat-rescues than others for you to move on.  This is all equivalent to the “star” system of many casual games, as you can get the minimum each time to move on, or you can be a completionist and go for the maximum. 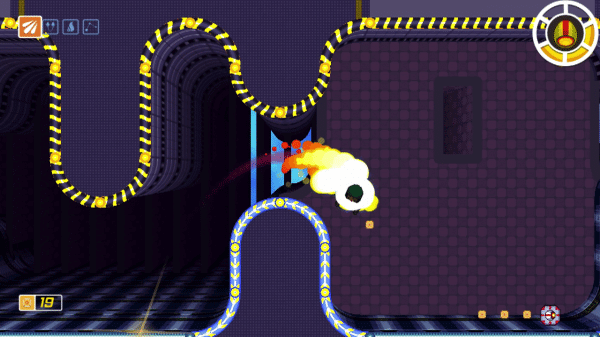 Scram Kitty’s many-games-in-one identity might be a consequence of what are, clearly, its many influences.  Genealogically, this game seems to be the equivalent of a mixed-breed tabby – but in a good way.  Playing it is like a walk through video-game history, with elements of Super Mario, Galaga, Sonic, and Angry Birds, to name just a few.  Scram Kitty DX lovingly takes the best of the games that we all grew up on, and presents them in a fresh, highly-polished, and tightly-composed package.  Visually, the 16-bit sprite aesthetic scratches the right itch, and the game’s 80s synth-pop soundtrack purrs pleasurably in the background.  Colorful, cute and cool, Scram Kitty has a style that rubs you the right way.

However, given its Retro pedigree, I was not surprised to see Scram Kitty’s gentle beginning end abruptly.  By the end of the Tutorial, things get a lot tougher, and this kitty starts to show its claws.  New elements, such as hazardous spikes, add danger. Bosses, including robots, get a lot nastier and the fur really starts to fly.  Herding lost cats gets quite a bit harder too, as I found myself frantically chasing them down before the timer ran out – I suddenly know the frustration my cat must feel when I sit giggling, like a moron, as he runs in circles chasing my laser pointer.  No wonder he pees on my shoes.  And the small groups of mice-enemies you faced early-on gradually become utter hordes of rodent armies – although, I must say, the little squeaks they give out when you destroy them bring a satisfying thrill.  Overall, the game’s increase in difficulty, while expected, came a bit more sharply than I would have liked.

New unlockable skills, such as a super double-laser beam, are offered up to help you negotiate the increasingly-hostile environments of the game, but things will still get extremely frenetic and challenging as you progress; you’ll need all of your nine lives for this one.  When you die, you must redo the level over again, which will leave you hissing in anger if you are a whisker away from finishing (at least the levels are short).  This steep difficulty-curve is something so often seen in Retro-inspired games, it seems to be almost a legal requirement at this point.  I am not sure if I can comfortably describe such heart-attack inducing gameplay as always “fun,” but it is compelling and maybe even addictive for a time.   How long you will want to indulge in this masochistic cat-and-mouse is a question for you – and your sanity – to answer. 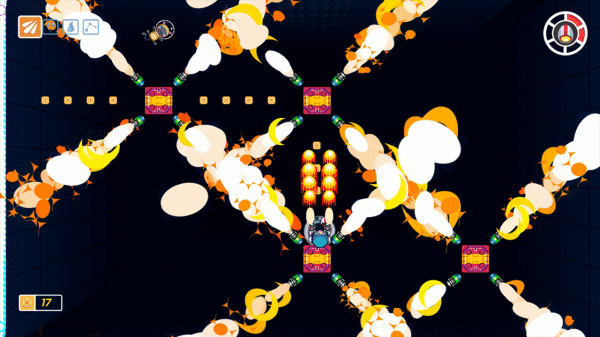 There is a lot to this game – lots of things to see, lots of different things to do, and clearly lots of influences at work in its creation.  All of which is fine – I just found Scram Kitty to have a bit of an identity-crisis.  It throws many disparate elements at you, seeming to assume that, with so much going on, you can’t possibly get bored.  And you do have fun playing it, for sure.  The problem is, the parts don’t necessarily come together into a “whole”;  Scram Kitty is really a bunch of mildly-entertaining mini-games, and the magic that is supposed to make them gel into something special never quite happens.  Also, unlike some difficult retro games, Scram Kitty’s levels are essentially the same background – a space station – all the time, just with tougher obstacles and enemies.  So, it doesn’t benefit from the thrill of at least finding new environments or taking on totally new opponents.  The tasks you must do in this game aren’t really full puzzles either, which also might have allowed for more variety.  They are just the same thing each time, but harder and harder.  All of these things prevent this good game from being a great one.

In Scram Kitty DX, there is just too much happening not to have some fun for a while.  It is a cool, visually-appealing game that definitely will entertain you – and at times enrage you. Its level of polish, including the funky music soundtrack, is outstanding.  Just know that this is a smaller, casual game, and you will start to find the sameness a bit tedious after a while.  There is a Challenge mode, in which you can try a timed-playthrough of a level and try to get onto the Leaderboards, which adds a bit of extended “fun” (or stress, in my view) to the original, Adventure mode.  But overall, like my cat and his laser pointer, the novelty of Scram Kitty DX will eventually wear off and you will walk away.  Hey, at $7.99 cross-buy on PS4 and Vita, it is still well worth the reasonable price, and you should definitely check it out.

Next Mushroom Men: Truffle Trouble Review – The Trouble with Truffles
Previous Borderlands: The Handsome Collection Review – A Gajillion Dollars of Gameplay Content & Worth Every Penny