What would you do in this situation: You have crash-landed on a desolate alien planet. All of your crew mates are dead except for your captain, who is severely injured. Your goal is to get yourself and your captain off the planet in one piece before you both succumb to the brutal environment and potential alien threats.

Welcome to Morningstar: Descent to Deadrock from Red Herring Labs. This game was originally released back in 2009, but is now back with new puzzles, improved graphics, and a more refined interface – but does it still have the same heart and soul of the original?

The game plays like an old-school point-and-click adventure. You move a cursor around the screen to interact with items, and pathways to enter new areas. When you find an item, it will be put into your inventory, shown on the right side of the screen. Here you can scroll through all your items easily, and work with them to create new items you might need to solve puzzles and advance in the game. Having the inventory always visible was a plus, as it didn’t pull you out of the gameplay as some other games in the genre do, where you get a different screen. Moving from area to area was pretty straightforward – you just move the cursor to the sides of the screen or over things like ladders and doors to see if a path was available, and clicking.

When it came down to the puzzle aspect of the game, I found the puzzles not too challenging, but still fun to do and hunt around for the proper pieces of equipment or that certain place in the game to help you advance. I was able to solve most puzzles with just common sense, but there were a couple that had me scratching my head thinking “Ok, I guess that could work”. If you do get stuck, you can radio your injured captain who can give you a nudge in the right direction. He was helpful in most cases, but in a few I knew what to do but wasn’t sure how to actually execute it. I found the gameplay overall was quite similar to another game I reviewed a few months back called Shadowgate, which is not a bad thing as it worked very well in that game too. 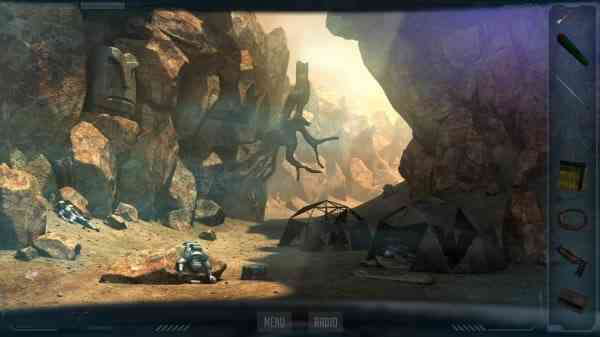 “Every environment you enter, from your damaged ship, to the barren landscapes, to strange alien devices, all clearly told a story without the need to even click on anything.”

As for the overall look of the game, I was rather pleased with all the set pieces. Every environment you enter, from your damaged ship, to the barren landscapes, to strange alien devices, all clearly told a story without the need to even click on anything. It was like looking at a painting at times – which could be a good or bad thing on how you look at it. It’s very pretty to look at, but very little to no animations exist unless you are actively working to solve a problem. Once you solve a problem a small animation may play out, but thats about it.

The audio can really make or break a game, and in this case it really makes it. I enjoyed all the music and the sound effects the game had to offer, finding a lot of them to be really haunting in some cases. Unfortunately, when it came to the voice-overs, it is a mixed bag. Sometimes it sounded like the voice actors were simply reading directly from a script, some lines sounded like they were improvised on-the-fly, and others sounded like they really didn’t want to be reading the lines at all… but I’ve heard worse in the past.  Still, it took me a little bit out of the experience when it felt the actors weren’t into the story themselves.

In the end, I enjoyed my time with Morningstar: Descent to Deadrock. Anyone who has history playing these types of games will feel right at home – just don’t expect anything really new. The old adage “if it’s not broke, don’t fix it” applies here – other than the voice acting.

***Reviewed on PC, code provided by the publisher***