Racing fans, start your engines! The team at Milestone are bringing the excitement of supercross to a living room near you with Monster Energy Supercross – The Official Video Game 2. Featuring a solid assortment of single-player modes, a decent multiplayer mode, and tons of customization options, fans of supercross are in for a real treat. Whether you want to fill the shoes of real-life supercross stars or create your own supercross racer, you’ll have plenty to do as you race across the United States from arena to arena.

Admittedly, I’m not much of a supercross fan – and my knowledge of the sport is limited to watching the occasional highlight reel. So when I first booted Monster Energy Supercross 2 up, I was a bit overwhelmed with the sheer amount of content included. I had no idea where to begin as the game is absolutely stuffed with content. After a quick tutorial session, I decided to begin with the Career mode. The Career mode allowed me to create my own custom rider, which featured almost enough customization options to provide some decent on-screen representation. I loved the fact that I could narrow my riders home to the actual province I live in – proudly displaying the British Columbia flag whenever my rider was announced before a race. From there, I chose a sponsor who would provide me with some much-needed income, but also provided some specific demands for me to meet, such as winning events. Each in-game week would allow me to pick what types of things I could do to earn more fans, money, and training. For example, on Tuesday, I could choose to meet fans and then on Thursday, I could race head-to-head against a rival. The weekends are always reserved for the main events, where I’d compete against a large group of other racers for the win.

When it comes down to it, it’s all about the racing. The game provides some options to tweak the racing experience between authentic physics and more relaxed physics, but regardless of the options I chose, I just found the racing okay at best. Maybe it’s more the nature of supercross, but something about bounding down a bumpy straight and then slowing to crawl to make a corner, and repeating this for three or four laps – well, it’s just not very fun. The game is designed to take a more authentic approach to supercross, which I’m sure some hardcore fans will appreciate, but for the more casual gamer and supercross fan, I imagine a more relaxed, over-the-top approach would have been more fun. If you’re looking for something more like the Trials series, you’d be better off looking elsewhere. If you’re a fan of racing games, I would say Monster Energy Supercross 2 is more like Forza Motorsport than Forza Horizon, in other words, it’s more serious and rigid, as opposed to being fun and relaxed. Controls are simple enough, for the most part, you’ll just use the triggers to accelerate and brake. However, in the air, you’ll use the right thumbstick to adjust your rider’s position to nail landings better. There is also this ability to “scrub”, but after my hours with the game, I still can’t figure out exactly how to successfully scrub and what benefit it brings. 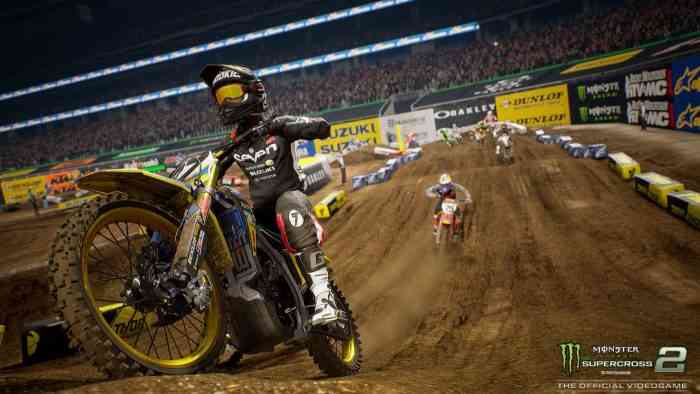 The Leader of the Pack

The games multiplayer options are limited to online only, much to the disappointment of my two son’s who were stuck watching their dad play instead of riding along via split-screen. My experience with the online multiplayer was actually pretty good – no noticeable lag was a huge plus. You could select from many real-life riders or choose one of your custom riders. Every rider was able to pick the location they wanted to race in and the location with the most votes would win. It’s a relatively simple multiplayer experience, but it works. One disappointment was the lack of in-game contact between racers – you just simply ride through them like ghosts. In single-player, you’ll aggressively bump and grind your way past the competition, especially when you’re in a big pack – but multiplayer lacks the physical play, and that’s a bit of a letdown, although it probably cuts down on players being complete jerks.

In addition to the single-player career mode, there are a handful of other options, such as single race and championship – but there is also the option to ride in the Compound, a large open-world area that lets you test your skills. It’s a cool area, but I really didn’t find enough there to hold my attention for more than an hour or so. There’s also a track editor which allows you to build and share your very own race tracks. The editor features a decent selection of track options and I was able to whip up a decent track within a few minutes.

Visually, the game looks a bit dated. While the arenas themselves feel really big, complete with cheering crowds, the actual courses seem a bit dull – mostly because you’re riding in dirt, dirt, and more dirt. Sure, that’s what supercross generally is, so I suppose I can’t fault the game too much on being authentic. The character models are a bit hit and miss. The racers look fine, and when there are fifteen or so racers all onscreen jockeying for position, it’s a pretty cool effect, but then there is that odd-looking woman who walks the starting line before each race – she just doesn’t look quite right. The game features two in-game announcers, who I assume are actual supercross announcers, but I found they repeated the same few lines over and over for my created character. The music though, well, I just did not enjoy it at all. It’s a mix of metal and punk – two genres that I listen to often, but I didn’t recognize any bands, and after a couple hours of game time, I just turned the in-game music way down. Of course, music appeals to everyone differently, so I’m not holding the soundtrack against Supercross 2 – I’m sure some fans will dig it, but I did not.

Monster Energy Supercross – The Official Video Game 2 has a lot of great things going for it. The nice assortment of single-player modes, the decent multiplayer mode, and the vast customization options are all well executed. The track editor is easy to use and pretty robust. The sheer amount of licensed products in-game is just astonishing and really adds to the level of authenticity. I do feel the game looks a bit dated, but I didn’t find it took away from the experience too much. I wasn’t a fan of the game’s soundtrack, but music is pretty subjective, so I wouldn’t dock any marks for it. The controls work, but I would have appreciated some more in-game information regarding some of the mechanics such as the “scrubbing”. If you’re a fan of supercross, this is probably the best possible way to live the life without worrying about breaking any limbs. If you’re more of a casual racing fan looking for something different, it might scratch that itch, especially if you prefer more simulation-style racers over arcade racers. 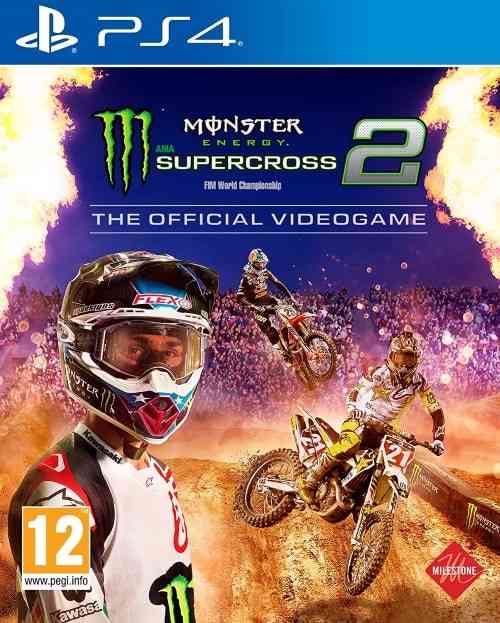 We Take Monster Energy Supercross: The Official Video Game 5 for a Spin Around the Dirt Track