Microsoft Flight Simulator has been an absolute phenomenon since it first launched in 2020. Offering would-be pilots the opportunity to explore the entire world in authentic planes with realistic weather – it’s quite simply unrivaled. The developers have continued adding paid and free content to the flight sim, continually improving upon a winning formula. Since my first flight, I’ve been a fan of Microsoft Flight Simulator, but I’ve been eagerly awaiting some new content that adds more activities besides exploring and landing. This brings us to the Reno Air Races DLC, which brings a brand new multiplayer racing component to the mix. So, is this new racing component a meaningful addition to a brilliant game? Not at all.

The Reno Air Races DLC is paid content that adds a multiplayer racing component to Microsoft Flight Simulator. Developers worked hand-in-hand with the Reno Air Racing Association to create an authentic racing experience. And booting it up for the first time does create a sense of awe one might have when they first arrive at an airshow like the Reno Air Races. You’ll see the crowd lined up along the runway, cheering their heads off. You’ll hear the announcer providing a play-by-play of the event. It definitely looks and feels authentic; and props to the developers for providing such a realistic experience. Unfortunately, beyond this, there isn’t much to be excited about.

The Reno Air Races DLC comes in two different varieties; the Full Collection, which includes 40 licensed aircraft, and the Expansion Pack, which contains four licensed aircraft. Both varieties offer planes from each of the four Reno Air Races flight classes, allowing players to decide which class they’ll compete in, from the classic Biplane Class to the speedy Jet Class. Both of these DLC packs come at a price, and which one you choose will depend on how deep you want to go. If you just want to race, the Expansion Pack might be sufficient, as you’ll have one plane for each class to fly around the circuit. If you’re more a die-hard plane connoisseur, you might be more interested in the Full Collection, which will allow you to pick from more planes before each race. 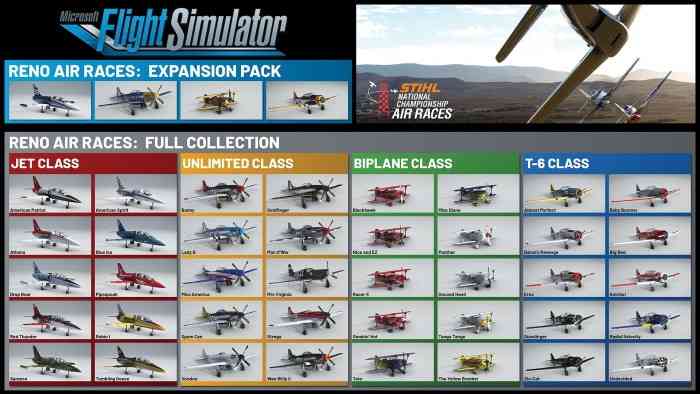 The Reno Air Races take place above Reno, Nevada, and task players with flying around a pre-determined course – marked by beacons – while staying a specific distance above the ground. Fly too high, miss a beacon, or fly off-course, and you’ll be penalized. This is the first critical issue with the DLC. While these limitations are designed to maintain authenticity, new pilots will have a hell of a time trying to adhere to the strict flight path. And as you become more seasoned, the limitations create more and more boredom. The race track is always the same, with slight modifications to accommodate the four different plane classes. So you’ll be flying the same six laps over and over and over. Same airspace, same views, same commentary, same everything. Honestly, it got dull before I finished my first race.

The Reno Air Races DLC offers two different modes for players. Time Trials and Quick Race. Time Trials are a solo endeavor, which allows pilots to fly around the course as fast as they can to climb the worldwide leaderboards. Quick Race will let you compete online with other pilots – there are no AI pilots, so the number of people you play against will all depend on how many people are playing at the time. I never had a full lobby during my time with the Reno Air Races, usually only flying against 2-3 other pilots. Your performance against real players will affect your rating, which is ranked on a worldwide leaderboard.

Look Out for Jerks

One of the most annoying aspects of the multiplayer is how it handles crashing. If you crash during your race, you’ll be pulled back to an earlier point to continue the race. This in itself is fair. However, if a plane behind you crashes into you, both you and the other player crash, and you’re both pulled back to an earlier point. In one instance, some jerk crashed into my plane twice from behind, allowing a third player to pull quite a distance ahead of both of us. And once you fall behind, you are truly at the mercy of the other pilots. You can fly flawlessly from that point on, but you won’t make up any time unless your opponents make a mistake by crashing or missing a pylon. While all of this is designed to create an authentic experience, it also creates a terribly dull experience. 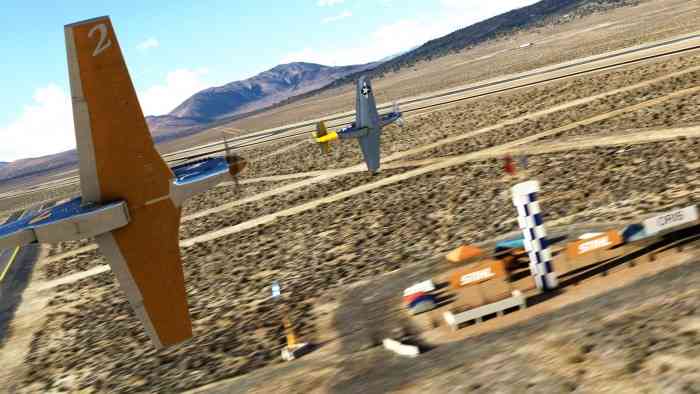 While I can appreciate what the developers were hoping to bring to Microsoft Flight Simulator with the inclusion of the Reno Air Races, I just can’t recommend it to even the most die-hard of racing fans. The inclusion of 40 new planes to Microsoft Flight Simulator is a treat for any plane aficionado – and the aircraft do look great. However, the racing itself is a repetitive and bland circle around the same airspace, with only minor changes between the four plane classes. Multiplayer doesn’t offer any sort of excitement. Since the goal was authenticity, there are no great equalizers here. If you’re playing against someone better than you, you’re going to have to suffer through 5-10 minutes of circling around until the race is over. And unfortunately, there are no repercussions for jerks who intentionally crash into you – sure, they’ll likely lose, but they’ll bring you down with. I didn’t enjoy any of my time with Reno Air Races, and I can guarantee I will not be playing it again. I still love Microsoft Flight Simulator and will continue to enjoy it – but I’ll be holding out hope for better content in the future. 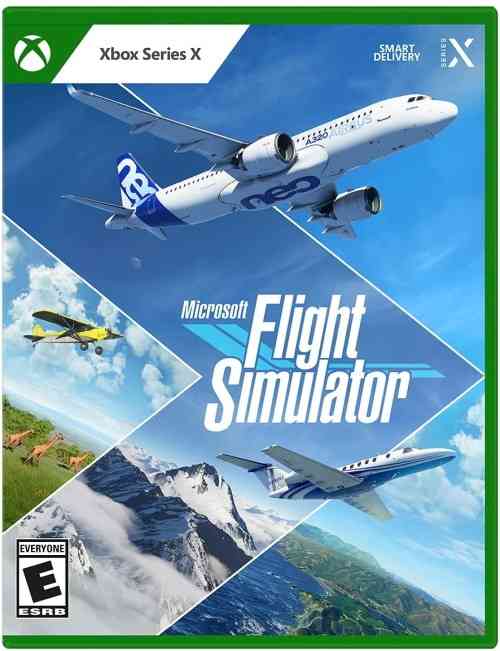