Remember the original Grand Theft Auto? Back before everyone referred to it as GTA, before GTA 3 came out and absolutely blew everyone’s mind, defining what an open world game could be? The jump from GTA 2 to GTA 3 still stands in my mind as one of the biggest and most significant leaps in gaming history, but the first two GTA games were legitimate in their own right. That gritty, top down crime game was endless fun for my friends as we tore through the city mowing down police and civilians alike. I played the original Grand Theft Auto for several hours before I even realized there were objectives. Matching the same aesthetic is Metrocide, by Flat Earth Games. Could it capture the magic?

Metrocide is, in essence, a rogue-like. Set in a futuristic urban landscape, you play as a contract killer accepting hits and carrying them out while avoiding being caught. In a way it sounds a bit like a game I love, Gunpoint. The top-down view is VERY reminiscent of the original GTA games, and Metrocide bills itself as brutal, unforgiving, and exceedingly difficult. I’m a little wary of rogue-likes at this point, but I’m always up for a challenging game. The combination of the two is potentially interesting, but it all hinges on two things: control and feedback.

If you’re going to enjoy an ultra-hard game, it needs to control precisely how you want it to. That’s why Super Meat Boy works. That’s why Dark Souls works. That’s also why Metrocide doesn’t work. I don’t feel like I have full control to carry out the actions the game is asking me to, and in an already challenging game it quickly becomes very frustrating. In a basic sense, you move around with the WASD keys, aim with the mouse, pull your gun with the right mouse button and shoot by holding down the left. Seems simple, and the movement largely works, but shooting is incredibly slow. This becomes a real problem when you’re quickly trying to kill a target on a busy urban street with cameras, cops, and civilian witnesses everywhere. 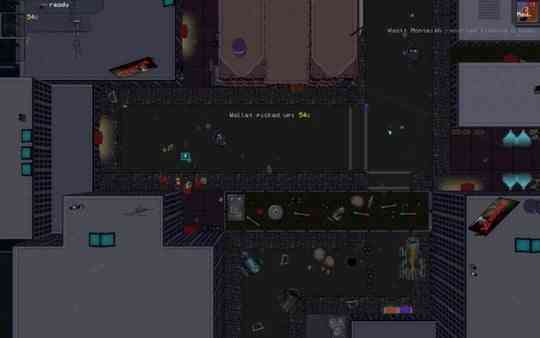 If you do get spotted, there’s little I’ve been able to do about it in my experience. Every time I was spotted, I got killed seconds later by either police or a roving gang member. Getting caught might as well be an immediate fail-state. Which brings me to the other crucial element, feedback. In a game that is ostensibly a stealth game, feedback is crucial. You absolutely must be able to easily identify whether or not you’re safe to act in a given situation. Metrocide does not do this well. It’s very hard to tell if anyone’s going to see you shoot your target, and even harder to identify what the response will be if you are spotted. Sometimes I was running away from a crime-scene and suddenly I was on the ground dead. Someone shot at me, but I had no idea who it was or where they came from.

The developers are heavily pushing this game as ultra-challenging, but Metrocide would have been served well by having a bit more of a difficulty curve. They need a few easy missions early just so the player can get used to the controls and systems at play. As it stands right now, a rogue-like with extreme difficulty, unclear systems, and less than ideal controls makes for a whole lot runs through the game that fail before they even get started.