The last time I played Magic: The Gathering was over 10 years ago when I was in high school because when I went to college I quickly became interested in other things (Hello Ladies). When a video game version of Magic was released for the Xbox 360 a few years back I played it more for nostalgia than anything else and I did enjoy it, but I didn’t really see the point of buying yearly iterations so the game fell to the wayside for me. Nostalgia never dies though and now that the Xbox One has its own version I was happy to find out that I was assigned to review Magic 2015: Duels of the Planeswalkers & the expansion pack Garruk’s Revenge.

Firstly, for beginners to this game, Magic is the first trading card game to be produced and has continued to be a leader for the past 21 years. Taking on the role of a planeswalker you battle other walkers using your library of spells, creatures and artifacts, all in card form. Generally speaking most of these battles are 1 vs. 1 but there are always opportunities for battle royale type matches as well; however, Magic 2015 sticks to the single player battles and I believe it is for the simplicity of it all. Using your skills you battle it out until one player takes all the life of the other player away.  This is just a brief intro and the game itself does an excellent job of bringing you through the ropes or in my case a refresher of the rules. Throughout the game you are prompted with new game mechanics explaining the rules in great detail. This will help you understand what is going on so you’re not wondering why you just lost 10 life out of the blue. For veterans of Magic card games out there this option can be turned off.

The intro is short and sweet which leads you into a campaign mode. This takes you up against different deck types while going through the storyline they have plotted out for you. Honestly, as I write this review I can’t remember the story at all but I do remember the pain in the ass AI players I had to battle against like Jace where it took me at least 20 tries to defeat him and several more battles against other planeswalkers to get more cards to even compete with them. Of course if you want to avoid the grind of battling it out against a multitude of enemies you can always purchase the Card Collection Pack for $24.99 or any of the six regional card packs for $4.99 each, and there are also the Battle Booster Pack Unlocks for $9.99. Now if you get the Card Collection Pack with the game you’re looking at $34.99 and the expansion is $4.99. You can get away with just purchasing the $9.99 base game but you’re looking at a long grind to get a lot of the good cards because like real life MTG you only get one rare card per booster pack. Now I don’t mind grinding a bit to get stuff to progress but losing over 20 battles is not really a fun experience especially when I don’t have a huge problem with other walkers. 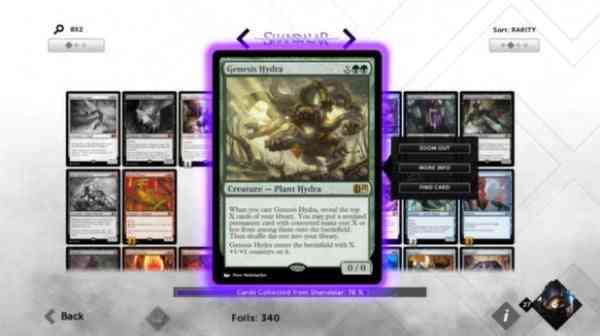 There are some exploration battles that you can do to make the grind a bit more tolerable where you can also unlock some achievements along the way doing the exploration for each of the areas in the game. Doing a bit of research on the game changes from previous iterations I came across some rants about former versions of game not even having the ability to even unlock extra cards making all unlockables available to purchase only. It seems they have done away with that which is a good thing for frugal gamers out there. However, they have also done away with all other game modes except for online multiplayer, which is an obvious, must have mode for a game like this. It’s quite unfortunate that they have done away with other game modes as the campaign only takes a few days to go through even after completing all the exploration areas.

Luckily, I was able to review the latest expansion called Garruk’s Revenge, which for $4.99 you get to play as Garruk, a planeswalker through another forgettable story that is displayed in glorious HD text. I found that I skipped over the story to get to the battles which are really well thought out, fun, and challenging for players to learn new strategies. The expansion offers up some new cards for you can unlock, but to be honest with just over 50 new ones available it doesn’t seem all that worth it for gamers to spend additional money, but the expansion campaign wasn’t all bad so that might be worth it for some diehard fans out there.

Online play didn’t go so well for me as I got my ass handed to me every time and it is quite obvious that a lot of these players have played through this game and unlocked a lot of cards for their decks (or paid for them). However, this is where you can play some multiplayer modes and really hone your skills against human intelligence rather than the game’s AI. It’s something I might jump back in to after I’ve unlocked everything and have built up my ultimate deck. 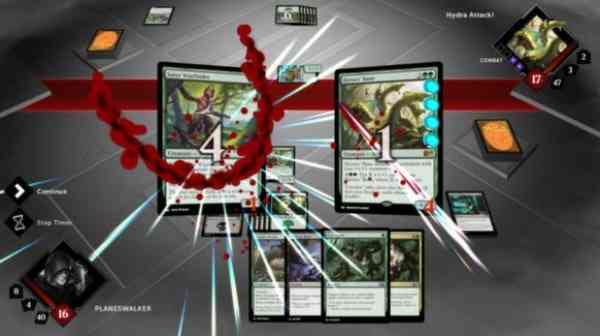 Speaking of decks, I thought it was awesome that I could build multiple decks that I could change out if I found that certain decks weren’t working. This wasn’t in previous editions I’ve played before and after some quick googling it appears that this option is a first for the series. Definitely a nice option to sit and sift through your cards to make a deck of your choosing.

The presentation of Magic 2015 is simplistic in nature because of the content it covers, but there is nothing negative to say about it. Graphics are sharp, cards readable and the battle animations, like flames bursting out or water flooding the screen, add some flair. Throughout the game there are some animated scenes that play out parts of the story that are quite vibrant and I wish there was a cutscene for all of the story portions of the game to move it along rather than some text thrown up. When playing a game these days I don’t absorb as much about the story unless I have some sound and visuals to tell that story for me. Simple battle sounds accompany the battle animations creating some extra atmosphere as well, but the background music is almost a waste of space in my opinion as I found myself turning it down low so I could focus on the game itself, as the music was more of an annoyance.

Even with the expansion included, Magic: Duels of the Planeswalkers 2015 doesn’t offer enough variety and makes it too difficult to progress through the game without feeling pressured to buy cards with physical money. What this game seems good for however are those people who might be interested in playing the actual physical card game. They could try this virtual version without investing some serious cash in real cards beforehand while allowing them to see if they like the game and learning the basics.

Next Metrocide Review – Sloppy Controls & Painfully Difficult, No Thanks
Previous Lara Croft and the Temple of Osiris Review – Who’s Down for a 4-Way with Lara?