Memoria (PC) Review – The world of “The Dark Eye” just got better!

Memoria is the follow up to 2011’s The Dark Eye: Chains of Satinav. For veterans of that title, Memoria features many of the same characters, but ties in events far in the past. It’s an interesting duality, and certainly provides ample motivation to play out the storyline. The two protagonists have parallel storylines, each in their own era of history. The story is very well written, weaving the two eras together despite being 500 years apart. Geron works to return his companion Nuri to human form while also exploring the mysterious story of Sadja – an ancient princess on her own journey to become a legendary hero.

The character development is solid – characters are likeable, strong willed, and unique – and motivations are plausible. It’s easy to become attached to the characters of Memoria, and much of this has to do with the great scripting and voice acting. Lines are delivered with emotion while maintaining believability, and the script frequently brings brief moments of levity to serious situations. It’s very well done generally and encourages exploration of characters and environments. 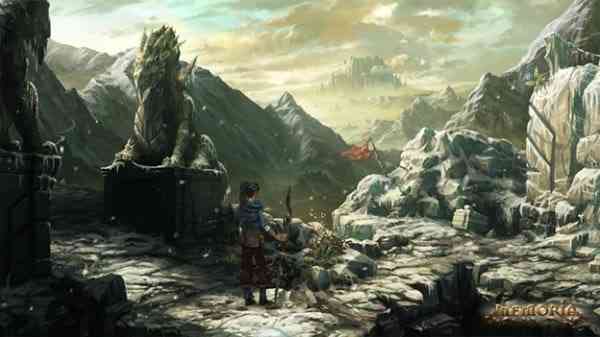 Functionally, Memoria is a classic point and click adventure. Expect a great deal of trial and error as solutions are not often intuitive, but are regularly very satisfying once completed. A couple of concessions have been made to playability – both of which save a fair amount of keyboard smashing rage. First, holding the space bar highlights all the “hotspots” in the environment that are interactive. The second helper can be activated to show you which items from your inventory can be combined. Both are very useful when (not if) you get stuck on some of the most complex puzzles. The puzzles themselves are clever and require creative thinking to solve in most situations, but the help systems make for one of the most accessible adventure games I’ve tried.

Visually, Memoria is an absolute treat. The backgrounds have an imaginative oil painted quality, and are perfectly suited to the fantasy setting of the game. The characters are equally detailed and well realized. Between the visuals and voice acting, it’s easy to get the sense that each character has a unique culture and backstory, even if the game doesn’t explicitly say so. The sound design is very good as well. The title theme grabbed my attention right away, and the atmospheric music and effects used throughout the game add to the experience greatly.

Memoria is a great title, and is a high water mark for Daedelic Entertainment. By providing challenging puzzles and an engaging story while largely avoiding frustrating scenarios, Memoria hits a sweet spot that should appeal to almost anyone interested in the adventure or puzzle genres.