The Mega Man Legacy Collection may not be the first package of Mega Man games released; or even the second or third for that matter. That said it is the first Mega Man collection to faithfully reproduce the six games released on the NES.

The project came about when Capcom was approached by the Digital Eclipse studio who had created a game engine that could faithfully reproduce NES 8 bit games on PCs and the current consoles: PS4, XBox One, and 3DS. This is why there are six Mega Man games in this collection as compared to the eight for the PS2 Mega Man Anniversary Collection released back in 2004. That collection had two extra games released from other systems.

Digital Eclipse’s approach to this collection was to archive the original versions as closely as technically possible to their original NES releases. They like to think of this collection as the Criterion / Blu-ray copy of the six Mega Man NES games. Digital Eclipse also intend this collection to harken back what it was like to be a kid in the late 80s and early 90s when these games were released. When you play the collection you will see such things as the slowdowns programmed into the game when multiple enemies appear on the screen. What you will not see are any slowdowns that were related to the NES hardware itself.

The original square aspect ratio of the game has been preserved. The games look razor sharp yet preserve instances of sprite flicker that were inherent. As a concession to current widescreen HDTVs, video options are included to allow users to stretch the image to fill more of the screen. Three Screen options exist: (1) None – preserves the original aspect ratio of the game; (2) TV – stretches the image vertically; and (3) Monitor – stretches the image vertically and horizontally. Frankly, the Monitor option stretches the image in a way that detracts from the game’s visuals. The TV option gave the best compromise I found.

There is also a Filter option: (1)Off – shows the 8 bit graphics in High Definition glory free of video display artifacts; (2)TV – gives the image a CRT look with flickering and ghosting. Very accurate of old TVs but also one I’m happy to leave behind; and (3)The Monitor filter recreates image from the arcade versions with visible scan lines but no flickering or ghosting. The purest presentation of the game would be the mix of Screen option of None and Filter option of TV. The most pleasing one for me was Screen option of TV and Filter option of None.

“So the games look and sound great, so how do they play? Wonderfully! The controls are responsive and the feel of playing these games from the NES days is totally there.”

Switching between games is quick. Also added is a new feature, a one save option per game is allowed so that you can stop at a point in one game, jump to another and play that game. You can then either save your progress in the second game, or quit, and then go back to the first game and continue where you left off.

On the archive side of the collection each game has options for: (1) Museum; (2) Database; (3) Challenges; and (4) Juke Box. The Museum option opens up a wealth of game art. This includes production sketches, official licensing sheets, and high quality scans of magazine art used for advertisements.

The Database is a treasure trove of enemy descriptions which includes their weaknesses. This Database marks the first time the Japanese material has been localized for North American players. But the coolness does not end there. The Database for each character also includes the ability to fight / practice against the Robot Boss characters. Note, this option is NOT available for Dr. Wily – the Megaboss if you will. Digital Eclipse wanted to preserve a few gameplay surprises. 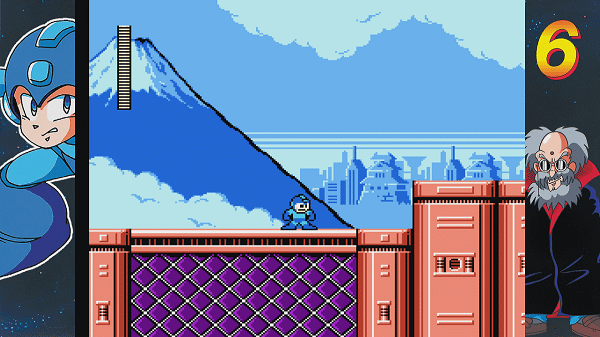 Challenges offers up new gameplay modes for veteran players. And new players too, of course. In challenge mode, all levels from all the games are accessible and presented to the player in random order. This creates new challenges as the player must remember what weapons and abilities work best for any given level. Not easy to do unless you know each game fairly well beforehand.

In addition, each level from all the games are selectable individually and ranked on a leaderboard. You can see who finished what level in what time with the greatest number of points. The leaderboard also include the ability to view the video of high score runs. You can sort and filter the leaderboard to show only your scores, your friends, or the top 100.

The last nifty inclusion is a Jukebox mode where you can listen to the music for game levels. Each game is like an album with each level treated as an album cut. As the music plays for a select level, a progress bar appears letting you know how far into the track you are. The missing options I would have like to have seen are ‘play all’ and ‘shuffle.’ So only a single track can be played at a time and when one finishes you have to manually select the next one to play. Rather tedious. Keeping in tone with the archival concept of the project, the music is presented in its original midi form and they sound great.

The final bit of history preserved with these games are the game bugs and cheats. If you knew any secret codes to enable them, they will work here. The only cheats that do not work are any that required two controllers to activate them. Pretty cool! 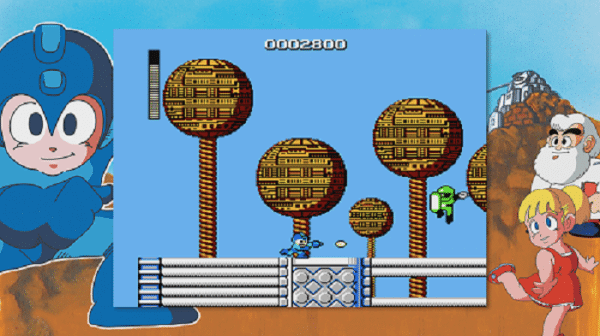 So the games look and sound great, so how do they play? Wonderfully! The controls are responsive and the feel of playing these games from the NES days is totally there. If you found them frustratingly hard well then be prepared to feel that way again. There are no settings to make the game easier. This is old school stuff with the attendant old school challenge. I found it refreshing!

This is the purest recreation of these games to date. Some may grumble about earlier collections having more games but if you are a true Mega Man fan or particular about collections being true to the originals then this collection should definitely be part of your gaming library.

There is an obvious wealth of 8 bit NES games begging for the same treatment as the Mega Man games. Digital Eclipse has not stated which they will be doing next but based on the work they have done with the Mega Man series, we definitely hope for more of them!