Mario Tennis: Ultra Smash Review – A Good Title that is Better when Played with Friends

As I’m sure was the case for many others growing up, I was never one of the first picks in P.E. class when it came to team selection. In fact, quite often I was last. It’s okay though…I’ve grown past it. I’m an adult now, and elementary school was so long ago. I don’t let early childhood wounds define me…or count how many times I think back on it and cry myself to sleep. High School brought me new opportunities and new people who would pick me last…again. It was great! The best part of this new gymnasium and new atmosphere was my new gym teacher. This guy was a blast. He called everyone by their last name. Every pass or shot he made was “A Gift from Heaven” (his words, not mine), and if you failed to capitalize on a pass he’d call you a plumber. He was a truly inspiring man. It’s funny that he’d use the word plumber as an insult though. The few plumbers I can think of are pretty good at sports…like…all of them.

Mario Tennis serves itself back into action with its latest title on the Wii U, Mario Tennis: Ultra Smash. In it comes new modes and new types of play never before seen in a Mario Tennis title…at the surprising cost of many other well known and loved modes. Mega Battle mode, Amiibo Knockout Challenge, and Megaball Rally make up for the bulk of the gameplay in this title, while old classics like Ring Tournament and the minigames of past are all completely absent. Instead of different courts this time around, Mario Tennis: Ultra Smash has different surface types to change up gameplay. While this does a good job of keeping the gameplay somewhat fresh, it does nothing for the visual monotony of seeing the same arena over and over. Even the roster seems to have taken a hit having been reduced from 18 on the Wii and GameCube to 16. But enough with the doom and gloom; Mario Tennis actually has some pretty good things to brag about too if you only give it a chance. 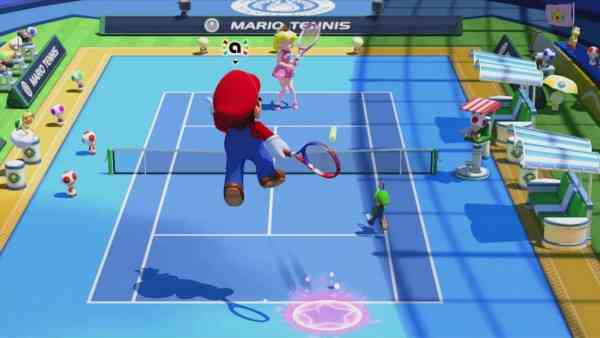 If you’ve played a Mario Tennis game before, you may now take a sigh of relief because Ultra Smash hasn’t really changed the formula much. What sets it apart from those before it though are two distinct gameplay hooks. The first of these is the one we see Nintendo lean on pretty hard as a selling feature; the Mega Mushroom. When you boot up the game and open up the main menu, the first thing you’re going to see is Mega Battle. Mega Battle is this games primary game type, and as such has been granted the most real-estate in terms of button size. Periodically during play in Mega Battle, a red Toad will throw a Mega Mushroom towards your side of the court. You don’t have to use it immediately, as it will sit and be available for your disposal whenever you want. When used, the Mega Mushroom does the same thing it has always done, turns you into a giant. Your range and swing power increase immensely, making this a great tool for closing a gap in points, or finishing off your rival. The second addition to your repertoire of skills is the jump shot, and it’s powered up sibling; the Ultra Smash. Jump shots are executed by double tapping the swing button just before your racket connects to the ball. The Ultra Smash however takes a bit if patience and waiting. Every so often during gameplay you’ll see colored icons pop up on your side of the court. One of these icons specifically indicates an opportunity for an Ultra Smash. Ultra Smashes are powerful strikes that are often time impossible to return.

For anyone that wants to avoid the frill of new gimmicks and fancy mushrooms, Mario Tennis: Ultra Smash also packs a “Classic Tennis” mode. This game mode is more in line with previous Mario Tennis titles and is a great choice for anyone who values strategy over power-ups. Classic Tennis itself is broken down into two types: Simple and Standard. Standard mode keeps both Jump shots and Chance shots in place, while Simple mode strips everything but the core of the game away. It really just comes down to preference, and just how much of the “original fluff” you want to boil away from your matches. There’s something here for everyone from enthusiasts to purists.

One of Mario Tennis: Ultra Smash’s other new modes is Knockout Challenge. It’s here that both amiibo collectors and true challenge seekers will be put to the test. Knockout Challenge mode is straight forward enough; keep playing until you’re eliminated. You will face increasingly harder computer opponents thrown at you until you hit your breaking point. Each victory up until that point will award you coins. The more matches you win, the greater the payout at the end of each match. Knockout Challenge is also the sole place to put your amiibo figures to use. Amiibos can be used as partners in this mode to help you reach higher and higher. As amiibos are used, they will rank up and earn new traits to help give them, and you,an edge against the computer AI villains.

Another new mode worth mentioning comes in the form of Megaball Rally. It isn’t an especially deep mode, but is an interesting way to pass some time. The idea behind Megaball Rally is to keep a rally (hitting the ball back and forth) going as long as you possibly can. The main hook to this is that that as you rack up the score, the ball will get progressively smaller. Often times a failure in this mode can be chalked up to computer AI players being dumb. It’s okay computer AI, we still love you. 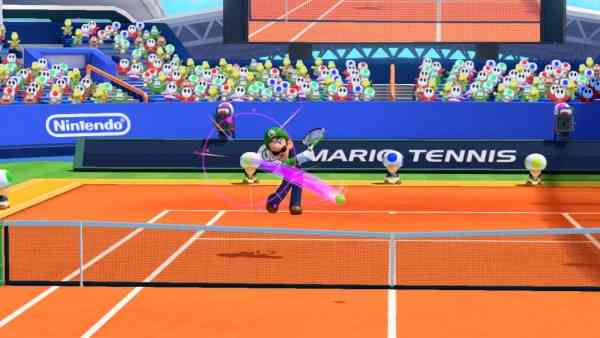 The truth about Mario games is that they never change their look too much from title to title. This is especially true for spin-off titles such as the sports line. Mario Tennis’s art style is unremarkably different from any of the other Mario titles over the past couple of years. That’s not a bad thing though as Nintendo first party titles always boast a level of polish worthy of, well…boasting. The game feels clean and has no notable visual hiccups. As for the audio, what musical pieces Mario Tennis has sounds great, but there don’t seem to be many tracks. The music that plays in behind the action on the court is high paced, inspiring, if not a little repetitive. Many game modes share the same music, and because the game only really features one arena, that music is on an almost indefinite loop. It’s not as though there is only one song that plays throughout the course of the entire game, but if you keep yourself in one game mode long enough it’ll begin to feel that way.

At the end of the day, folks looking for something more to do with their collection of amiibos, or who want a new multiplayer game to sit down with their friends, should definitely consider this one. What I can’t recommend though is expecting too much out of it from a single player standpoint. The fun is there, but only surface deep and is much better experienced with others in the room with you. Mario Tennis: Ultra Smash is a well-built game, but feels like one of the weakest in the ‘Mario Sports’ series in terms of content. Still, fans of Mario and his sports adventures should consider this title if only to dive into new power-ups and new twists on this racket-wielding classic. 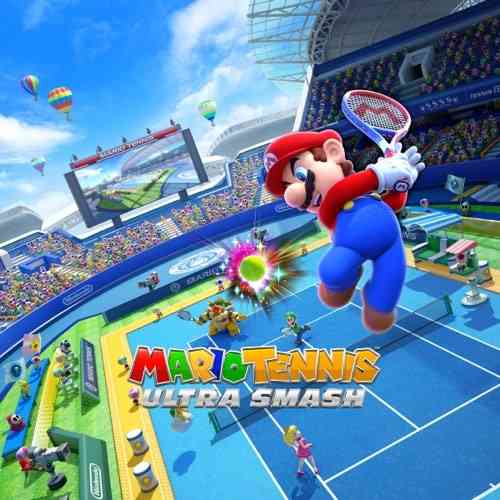