My first exposure to anything by developer ‘Q Entertainment’ came last year when I gave Child of Eden for the Kinect a spin.  It was certainly one of my more unique gaming experiences of 2011 and it was a game that made fantastic use of the Kinect’s motion controls. Solid visuals, stimulating sound and additive gameplay are a just a few adjectives I would use to describe the game.  Fortunately, the same can be said for Q Entertainment’s Lumines Electronic Symphony game for the PS Vita.  This addictive little puzzle game is one of Ubisoft’s launch games for the Vita, and much like Child of Eden it has many fantastic qualities, but it also had a few that grated me as well.

Before I get into what makes Lumines a very good little launch puzzler for the Vita, I will briefly explain to you the games basic premise and how it works.  Much like Tetris, Lumines is a block dropping game where a 2X2 square made of four smaller block pieces is dropped onto a playing field.  Those small blocks contained within the large block have one of two different colors.  The objective is to rotate and align the dropping blocks in such a manner as to create a 2X2 square of the same color.  Much like Tetris, when you get a square with the same color it disappears from the board once the scrolling timeline passes over them. The timeline moves from left to right and movement speed is based on the BPM of each song.  Your score then subsequently increases as the squares are erased from the playing field.  Much like Tetris, the game is over when the unmatched blocks reach the top of the screen.

The similarities between Lumines and Tetris are startling, yet Lumines is much more challenging and a more stimulating experience on so many other levels.  The game’s vibrant and bright colors are captivating.  The sounds also come to life and that addictive Tetris-like gameplay just manages to suck you in, and that is what happened when I jumped into the game’s single player mode. 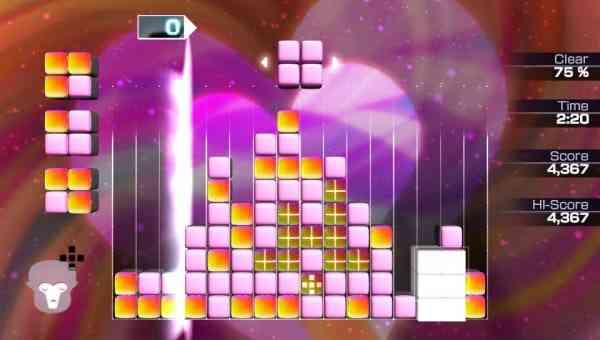 Before I sunk my teeth in the game’s single player mode, and when I first fired up the game, I was introduced to a variety of on-screen options and game modes.  In all, Lumines features five gameplay modes.  Voyage is the game’s main single player progression mode and it is where I spent the bulk of my time.  Playlist is where you can create your own playlist and then play through the various unlocked skins.  View it as your customizable play mode.  Stopwatch is where you try to erase as many squares as possible before the time runs out.  This is certainly a nice little pick up and play mode to satisfy those looking for a quick fix.  Master is the most challenging game mode of the bunch and is a game geared for those Lumines hardcore players.  Everything is amped up difficulty wise in this mode.  Duel is an ad hoc two-player battle mode where the first person whose blocks hit the top of the screen loses.  These are Lumines main offerings and all in all there is plenty there to keep you busy for weeks and months on end.

When you first jump into an actual game you are essentially thrown to the wolves.  What I mean by that is Lumines features no tutorial as you play nor does it feature any other on-screen tips as you play the game for the first time.  So for those new to Lumines you will be wondering what is going and what it is you are exactly supposed to do, much like I was felt the first time around.  I highly recommend you take the time to go into the options menu and read through the game’s tutorial and tips section or read the manual that is included on the Vita game card.  In terms of the tutorial, it is not a hands-on tutorial so do not expect one.  Otherwise if you don’t have the patience to do your homework you will have to learn the game on the fly.

As I mentioned, I spent the majority of my time in the single player progression mode.  The Vita’s screen displays a timeline, active blocks, waiting blocks, an avatar, the playing surface, percentage of the level cleared, elapsed time, score and high score.  You can use the touchscreen or buttons to control the falling blocks.  I preferred using the buttons as I just found them to be more accurate and not nearly as finicky as using the touchscreen.  I just found moving the shapes with the touchscreen was not as responsive as I had hoped given that blocks would not quite do what I wanted them to do with the touchscreen.  As a result, I stuck with using the directional pad and buttons for moving and aligning blocks. 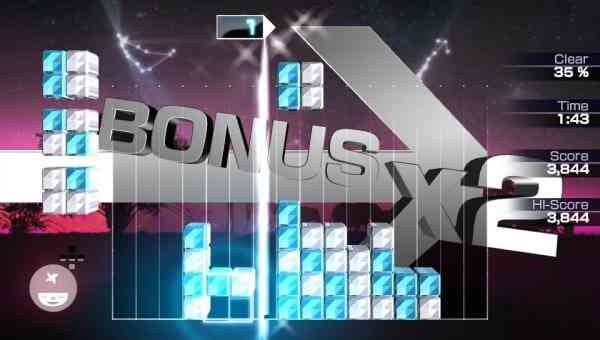 One of the more peculiar aspects of Lumines is the avatar.  The avatar is displayed in the corner of the screen and has different abilities depending on what avatar is displayed.  Touching the rear touchpad will recharge your avatar quicker.  Interestingly enough I found myself not using the avatar as much as I would have liked.  Nevertheless, in order to truly exceed and pull off some high scores using the avatar is critical.  The game also has an XP system which moves at a snails pace.  Even after an hour of gameplay I was still stuck on level 1.  Perhaps this may be partially due to my skill level, but regardless a quicker and more exponential XP system would have been ideal.  The XP system in the game almost seems like an afterthought.

As I eluded above, Lumines is played in different “skins”.  These skins change in appearance as you progress in the game, but the skins also control the soundtrack.  Much like Child of Eden, there is a lot going on screen at once which is a stark contrast from the rather basic on-screen interfacing of Tetris.  Each skin in the game contains a different music track and its own set of sound effects.  These sound effects are triggered by events that occur in the game and are then integrated into the soundtrack.  So needless to say, I was impressed with the game’s visuals and sound, which almost blend into one another.  It makes for a stimulating experience and one that is vibrant and extremely coloruful.  As you can see by the accompanying screenshots, Lumines is a game that is a nice little demo game for those of you looking to show off your new Vita hardware.

I have to say, my initial experiences with the PS Vita have been positive thus far and much of that has to do with my time with Lumines Electronic Symphony.  Simply put, it is a very good game and one that is perfect for gaming on the go.  This visually stunning and superbly sounding game has all the elements to be considered a must own for Vita owners.  Those fans of Tetris who are going to be Vita owners will absolutely want to pick this one up.  The only drawbacks as I see it would be the lack of a guided tutorial, and finicky touch controls, otherwise you really cannot go wrong with this one.