Out of all the games released for the PS Vita, to me there are only a few that really have me excited.  Don’t get me wrong, there are a lot of good games at launch, but only a select few have that real “must buy” feel to them.  One of those games is Rayman Origins, a 2D platformer, from Ubisoft, that is a shrunken down version of the home console game.  So how does this portable version compare.  I would have to say “marvelously”.

When we reviewed the console version of Rayman Origins last November, the game struck us as a much needed shot in the arm with its’ 2D gameplay, wonderful visuals, and tight control.  In a gaming world dominated by what seems to be an endless stream of first person shooters, third person shooters, RPGs and action games, Rayman was a breath of fresh air.  The portable version’s story stays true to its’ console roots as Rayman and his friends are relaxing on a lazy sunny day taking a nap.  As they enjoy their slumber their loud snoring annoys their nightmarish neighbours from the Land of the Livid Dead so much that it literally causes a war between them.  Characters of all size, shape, and form invade the Glades of Dreams (Rayman’s home) and it’s up to Rayman and friends to set things straight and cleanse his homeland of these uninvited guests.  You’ll play as the limbless hero himself, Rayman, or any of his friends, and as you make it deeper into the game you will have more characters to choose from.

Although there is a semblance of a plot, it takes a secondary role to the rest of the game.  This 2D platformer takes so many facets of gameplay and mixes them together for one great gaming experience.  One of the biggest things you’ll notice, next to the visuals, is the fact that this game has so much going on that you’ll rarely have time to soak it in.  Don’t get me wrong, it’s not so crazy that it is unenjoyable, but given how much there is to do and see you’ll have to literally prioritize your thoughts as you play.  The main goal during your hours of platforming fun is to save Electoons, collect Lums, and avoid the pitfalls and enemies in front of you. 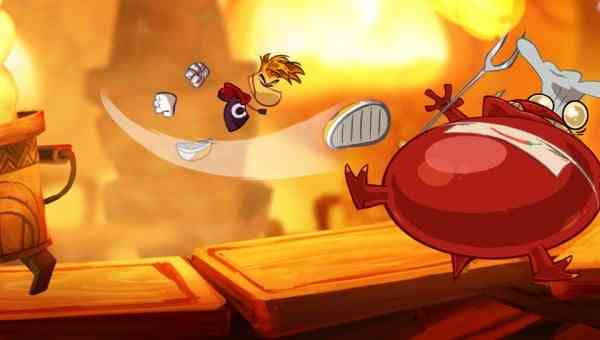 Electoons have been captured and imprisoned by those dastardly villains from the Land of the Livid Dead.  You will find up to three Electoons per level.  Usually two are hidden and one is at the end.   As you bounce, jump and fly in search of the hidden Electoons (hint: listen for the “help me!” cries), you will collect Lums along the way.  The best way to describe Lums is that they are the equivalent of coins found any Mario game or rings found on Sonic games.  Collecting Lums is a key component to the game. There are a particular number of Lums on each level you play, and although you don’t have to collect them all, you are encouraged to do so and rewarded for collecting all of them given that they help you collect bonus Electoons which in turn help you to get new costumes/characters, and assist in opening other aspects of the game.  I have to admit that collecting all the Lums can be quite a challenge, and this is part of the addictiveness of the game.  You’ll be challenged on many occasions to gobble them all up, but it is doable as long as you persist and be patient.

In Rayman Origins control is key, and this game controls incredibly well.  You have the option to use the Vita’s analog stick or d-pad, and for the record I preferred the d-pad.  Regardless, the game’s controls are spot on with either one and this makes for a really engaging experience.  From running, jumping, flying, swimming and breaking items, you’ll never have any issue doing so.  This is a good thing too as the game can have some rather difficult stages throughout Rayman’s adventure, but you’ll never become frustrated due to poor control issues.

The creativity behind Rayman Origins is through the roof.  Something that anyone who plays this game will find is that the level design, from the visuals to the actual design of such, is amazing.   Michael Ancel and the team at Ubisoft Montpellier are one creative bunch.  Man would I ever love to be in a room as they are talking about what to include in their games.  From lush jungles, windy deserts, seaside piers, underwater caves to cold and icy arctic settings, you’ll be amazed with what is included in Rayman Origins.  Heck, there are even levels where you ride on a mosquito while shooting enemies and navigating obstacles to get to the end.  Each level has amazing things within too, such as swinging vines, helping hands that toss you over obstacles such as water, fire and enemies, and creative ways to advance forward, such as bouncy bongos, copper pots where boiling liquid lifts the lid right off, to zip lines, bamboo umbrellas and icy slopes.   Each of the game’s various worlds is unique and the work that went into implementing the designs is remarkable as no two levels are remotely the same. 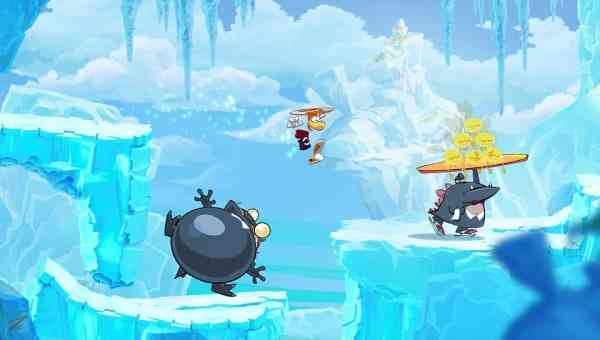 Along with the incredible level design are the visuals themselves, and in a simple word they are beautiful.  This is a game that clearly shows that 2D still has a place in the world of gaming.  The colours literally burst off the PS Vita’s display, and I am sure part of this is due to the new 5 inch OLED screen that each and every PS Vita has, but it also due to the great use of colour.  I was amazed with the variety of eye-candy from dense jungles, vine covered rocks, blowing sand, icy pathways, blocks of ice, columns of various nature (stone, ice, etc.), ocean side piers, and underwater reefs to name a few.  There is ample use of some great lighting and shadowing too, as evidenced when you play “Swimming with the Stars” and you see fish that light up your path and you have to follow them to get through.  Although the gameplay is 2D the levels seem to go on forever in the background.  The first time I played a level in the “Sea of Serendipity” world I was amazed with how the pirate ships way in the background moved around and some of them even shoot cannon balls at you.

Along with the great visuals in Rayman Origins is the great sound and I just can’t stress how much the sound also makes this game, specifically the music.  I don’t know how Ubisoft Montpellier came up with the soundtrack, but they are magicians for how they compiled such remarkable and original music.  Each level has it’s own theme, and I can’t tell you how well it matches the action on screen.  I was playing a level called “Freaking Flipper” and my wife commented on the music, which sounded like a high-pitched quartet or small ensemble singing as I navigated through the perils that I faced underwater.  When people who aren’t playing hear the music and comment positively I know there is something special about it.  As for the sound effects, they too are well implemented and match every action on screen.  From enemies blowing up and popping, cannons blasting, to wind blowing and ice breaking, all sound strong.  Finally, although there is no voice work and the NPC’s that you do interact with have cute babble to them.  Somehow their non-English banter matches the overall theme of the game.

I was pretty impressed with the PS Vita’s external speakers, and the sound that came out of them as I played Rayman Origins.  That being said, to fully immerse yourself in the aural magic of this game, it is highly recommended that you use a set of headphones to appreciate the work that went into the sound.  I used a set of Audio-Technica noise cancelling headphones and the sound just came alive.  Sure, you don’t have to use such a good set of headphones to enjoy the sound, but it doesn’t hurt. 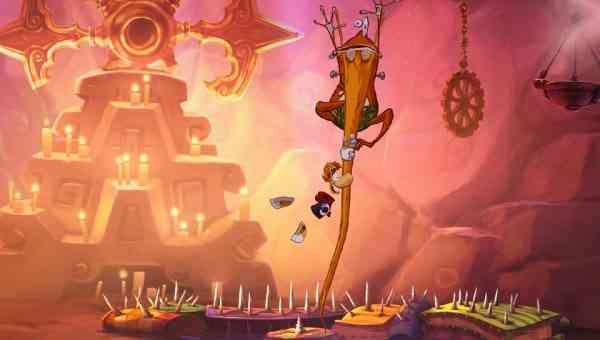 As a game, Rayman Origins will indeed test your gaming skills now and then.  It is a game that one can get though in a few extended sittings, but it is also one that will take a lot of patience and perseverance, a more then a few extended sittings, to complete 100%, including finding all the Electoons and collecting all the Lums in each level.  Most adept gamers should have no problem getting through all the available worlds, but there is no doubt that anyone who plays this game will run into those levels, or sections of, that will challenge their gaming skills.  From specific tricky parts of individual levels, to those special “speed run” levels where you cannot afford to make one mistake, there is a lot of varying skill needed to fully complete this game.

There are few key features that are quite different from the home console version.  The first is that Ubisoft has utilized the touch screen for gameplay.  When you discover Lums or hearts that are floating in a bubble, instead of having to jump for them you can simply touch the screen and pop them.   Some of the enemies that you jump on inflate to a balloon state and you only need to touch the screen and pop them too.   It’s a simple but neat little addition and I for one found it great for the Vita version’s gameplay.  Also new is the ability to pinch the screen and zoom in and out during gameplay.  Given that the game sometimes pulls the action back to allow you to see all the on-screen action, you do have the ability to zoom in using the touch screen’s ‘pinching’ ability.  This is a convenient feature and something I found was well thought out.

One of the most notable changes between the PS Vita and home console version is the lack of any multiplayer.  Rayman Origins for Sony’s new handheld console is strictly a single-player experience.  I for one was somewhat disappointed given that I enjoyed the multiplayer aspect on my Xbox 360.   I think that Ubisoft could have utilized the Wi-Fi feature of the PS Vita, either Vita to Vita or over the PlayStation Network.   Is this a deal breaker?   Hell no, but it is something that people should consider when making the decision to pick up this portable version.  To compensate for the lack of multiplayer, there is a new Ghost Mode that allows you to share/trade time trial data to try to beat.  It’s a pretty neat feature, but it is far from the enjoyment of cooperative play with another person.

Ubisoft’s Rayman Origins for the PS Vita is an excellent portable game, plain and simple.  The visuals are incredible, the sound is just as strong, and the gameplay is addictive with tight controls.  I didn’t want to stop playing this game.  There is no doubt that the omission of multiplayer is somewhat saddening, but given the PS Vita version is meant for those on the go, many will not miss this feature, although I did somewhat.  Rayman has made the transition to the world of portable gaming in style, and if you are picking up a PS Vita during the official launch, or sometime there after, you can do no wrong by picking up this title at the same time.