Gameloft is a mobile game developer who knows how to milk their franchises, and one such franchise is Asphalt, a racing game that has been around the block on various mobile devices such as phones, tablets and other handheld consoles.  Not to be left out, the PS Vita gets a version of this racing franchise courtesy of publisher Ubisoft.  Asphalt: Injection is already on store shelves for eager buyers who bought the First Edition PS Vita bundle, and it’s also there for people to buy prior to the regular release of Sony’s newest handheld on February 22nd.  I had a chance to play the game over the past 5 days and I finally feel confident enough to share my thoughts and impressions.

The main gameplay modes are Career and Multiplayer.  There is also a Quick Race mode which is self explanatory.  I spent the majority of my time in the Career mode.  There are a total of 20 different levels (or steps) of racing here, and as one would expect the difficulty ramps up as you get deeper into it.  Although I was able to hold my own, the level of the AI was noticeably different as I progressed.  Some races the lead car was just untouchable.  The first step of the career mode is named League Qualifiers.  For the purposes of this review I noted the name for every 5 steps up, which includes Bronze League (step 5), VIP League (step 10), Hyperspeed League (step 15) and Asphalt Legends (step 20 – final step).

There are quite a few different types of racing modes to be found in the career mode.  There are normal races (first one to cross the finish line wins), time attack (race around the track and reach specific checkpoints without running out of time), Elimination (try to be the last one standing as a timer is ticking and if you are in last place when it hits zero you are knocked out), Cop Chase (try to complete a set number of laps without being pulled over a specific number of times by police),  Beat’em All (try to takedown all your competitors by crashing them), Collector (race around the track collecting a minimum number of purple cash ($) power-ups), Drift (reach a certain amount of drift points in a specific amount of time), Duel (race against one car to see who is fastest),  Urban Destruction (try to accumulate a certain dollar number of damage by destroying objects around the track), and Under Pressure (all the other racers are trying to only take you out by crashing you).    In each step that you race in; there are a total of five different types of races that are made up of a variety of the race types I just mentioned.  What I enjoyed about this is that I was not kept to racing the same five types of races each time I advanced a step as the game mixes it up quite nicely. 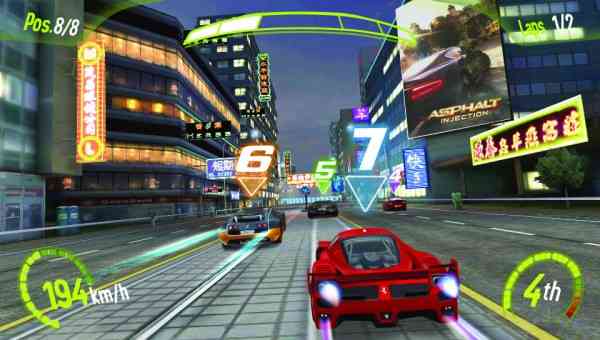 One of the key ways to advance, and open vehicles for purchase, is to rank at a certain number of stars after you finish the race.  The maximum number of stars per race is five.  There are bonus stars for meeting certain objectives during your race too, such as taking down a specific number of opponents, scoring a specific number of drift points, not being taken out yourself, or collecting a certain number of cash markers ($) on the track to name a few.  The more stars you get, the quicker you open up the next level in racing, and you open up the better cars.

Speaking of cars, I was somewhat impressed by the number of licensed cars found in the game.  There are 45 different cars from such manufacturers as Audi, BMW, Chrysler, Lamborghini, Ferrari, Delorean, and other types.  Each one is pretty well modeled and you can tell which car is what type of car.  The one thing I noticed is that the cars did not handle all the differently, although I could sense some difference.  A Tesla Roader or Audi TT did handle somewhat different then a Dodge Challenger SRT8.  Man, could I ever drift the Challenger SRT8 when I wanted to.  As you race you can also open up upgrades for your cars, such upgrades for your ECU, exhaust, tires, brakes, nitro, and many others.  These did indeed help you “pimp” your ride and make it faster or handle better.

Overall the AI was competent, and could really challenge you now and then.  I didn’t notice TOO much rubberband AI, but it was evident now and then.  If there is one thing that I did notice, and as I mentioned earlier, it was that in some races the lead car was pretty much untouchable.   I had to chuckle during one race as I swear I saw blue flames, which is a result of using Nitrous Oxide, coming out of my opponents exhaust for the whole race.   Regardless, as long as you stay in the top three during any one of the race modes, you are usually considered a “winner”. 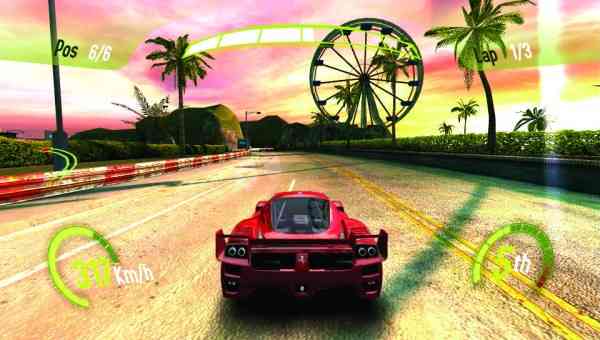 Should you get tired of racing against the computer AI, you can take Asphalt: Injection online for some world wide racing.  You can race up to seven other racers at the same time over the PlayStation Network.  You can race a Quick Race, or host a private of public race yourself.  I found that there were not too many people online when I played, but there was a nice mix of skill levels this early on.  It should be interesting to see how many more head online when the PS Vita fully launches on February 22nd.  The limited time I spent online was pretty smooth, only affected by a few hiccups which I attribute to people with bad connections.  Of course you can also play this game locally, using the PS Vita’s Wi-Fi feature to connect to other Vita’s.  I did not have a chance to play the game this way as not too many others around me have a Vita, let alone this game.

Of course what would a racing game be without tracks to race on?  There are 15 different locations such as L.A., Moscow, Nassau, Tokyo, Reykjavik, Monte Carlo, Rio and Hong Kong to name a few.  The track design was pretty good; show casing some of the regions main attractions or sites.  For example, you’ll find yourself racing on the concrete banks of the manmade L.A. River in Los Angeles or racing through ice caves in Reykjavik.  There are shortcuts throughout each track as well.  Although they are cool, they are not hard to discover and not all of them add a distinct advantage when used.  Overall I think that most who play this game will find the tracks pretty neat though and the variety in environments is appreciated. 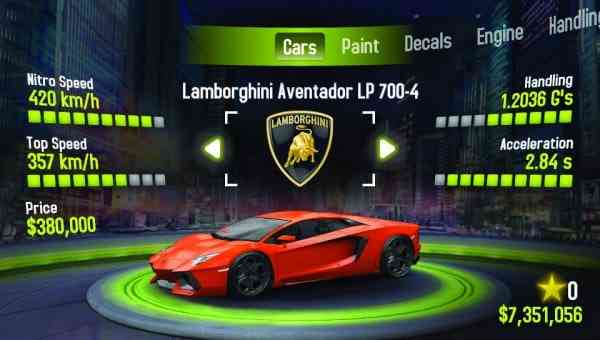 If there was one thing that really bothered me about this game it is that is has an identity crisis.  It can feel too much like a kart racer in such that a heavy reliance on collecting and using nitro all the time was key to winning.  As well, having to collect money was also very “kart-like”.  These are real life cars people, not small go-karts with tiny engines.  Along with the kart feel, is the inconsistency of hitting the sides of the tracks or other cars.  In some instances I would only bounce of said objects, while other times it would wreck my car.  It was a strange quirk to the game and it somewhat took away from my gameplay experience.

Visually Asphalt: Injection is not a bad looking game; it is just not that awesome either.  Given it has been released on so many other “mobile” platforms in the past, the game has been ported over to the PS Vita with minimal enhancements.  Sony’s new handheld has been blessed with a lot of portable power; unfortunately this game does not harness that power.  That being said, the game is colourful and there are some nice special effects now and then, such as lens flaring, lighting, and shadowing.  There are even reflections off the hood of your car.  The draw distance is not that bad either, with minimal pop-up.  If there is on thing that did drive me nuts however is that when crashes happen, either you or one of your opponents, cars did not crumple and they animation of the crashes themselves were very lame, as the cars didn’t show any type of physics or realism at all.  It was something that was quite noticeable from the get-go and something that warranted noting.

As for the game’s sound, it is a mixed bag.  The cars themselves manage to sound pretty good.  From a very faint and strange whine of the electric motor in the Tesla Roadster to the rumble and roar of the Challenger SRT8, the sound of each car varies quite a bit.  As for the rest of the sound effects, such as tires squealing, metal crunching, and roadside objects breaking, all is more than serviceable, but none is outstanding.  There is also music that plays during your races as well, and it is a mix of techno and electronica that does the job, but it definitely did not not inspire my racing.  Finally, the female announcer does can become repetitive in her sayings over extended play seessions.

At the end of the day Asphalt: Injection is not a bad game, it is just that it not particularly a good one either.  The game has a nice selection of tracks with some pretty neat locales, and the licensed cars are a treat too.  That being said, this is somewhat countered by kart like racing that relies too much on using nitro, and the inconsistency of banging into the side of the track and other vehicles can be a let down too.  If you have played any Asphalt racing game before, then you know what you are getting into here, but if you are new to the franchise or are just a racing game fan in general who is picking up Sony’s new handheld, then a quick look at this PS Vita racing game isn’t such a bad thing, just keep your expectations realistic.