I have to admit, I loved the original Alan Wake on the Xbox 360 when it arrived in May 2010.  When I reviewed it I gave the game high praise calling it arguably the best Psychological Action Thriller game on the Xbox 360 at that time.  Visually, the game was top notch, the sound gave me chills, and I simply fell in love with Wake’s storyline and gameplay.

Fast-forward 21 months later, Alan Wake’s American Nightmare for the Xbox Live Arcade is now available.  Advertised as a stand-alone game and NOT a sequel to the original, American Nightmare arrives at a time when a sequel would most likely be embraced by the masses.  So I for one found it a bit odd Remedy would focus its attention on an XBLA title.  Nevertheless, after some extended playtime with American Nightmare I must say I am impressed.  I forgot how much fun Alan Wake can be and for a $15.00 game American Nightmare is great bang for the buck.  That said, I did have some issues and at the end of the day and I am certainly relieved American Nightmare did not arrive with a much higher price tag as a full retail release.

As I already indicated, American Nightmare is a stand-alone game with its own story, objectives and plotline.  Much like the previous Alan Wake game, it can be difficult to follow and there will be instances where you will be scratching your head; yet the story still manages to capture your attention.  I found myself taking the time to read each of the pages of the manuscript (in-game collectibles) which are scattered throughout each of the game’s levels as they were pretty interesting.

In regards to the story, Alan Wake finds himself trapped inside a TV show he wrote called ‘Night Springs’.  Night Springs is presented much like an episode of the Twilight Zone and even sports a creepy narrator who sets up the plotline in-between each of the game’s objectives.  In the beginning, Wake finds himself stuck in a deserted town re-writing the script when he runs into his evil twin brother, or rather his doppelganger, Mr. Scratch.  Mr. Scratch has unleashed havoc in the town and hordes of Taken (the game’s main enemies) are on the attack.  As Alan Wake you must re-write the script, stop the madness, and ultimately escape from Night Springs.  Granted there is much more to it than that but that is basically the core storyline. 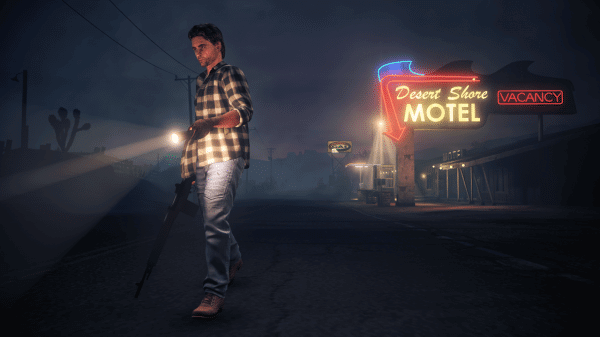 For an XBLA title, I found the story pretty good, but much like the first game it can be hard to follow as it almost felt like an episode of Lost where you start to feel like this story is going nowhere.  Mr. Scratch, and the rest of the characters you encounter, feel somewhat shallow.  You never truly get to know any of the characters and I found myself much more disconnected to Wake than I was in 2010.  That being said, when you consider the games price tag the story manages to do the job but my expectations would be much greater if I dropped 60 bucks for this game.

At its core, American Nightmare is a stripped down version of the original game.  Everything from controlling your flashlight towards the Taken to the numerous fetch quests plays and feels very much like the original.  It is certainly more inviting to those new to the franchise as the controls are easy to pick up and the weapons pack much more of a punch this time around.  American Nightmare features some new weapons to the series including a nail gun, combat shotgun, and automatic machine guns.  Of course you will need to unlock the guns from their crates after you have collected a certain amount of page manuscripts that are scattered throughout the game.

There are some new enemies added to the mix as well.  In addition to the shadowy grimacing figures from the original game, American Nightmare has a grenade toting figure, enemies that spawn into two when your flashlight hits them, swooping birds that spawn a rather gnarly looking enemy, and a few other new Taken’s are added to the mix.  All in all, there seems to be a little more variety this time around with the enemies you encounter.  The standard ones are relatively easy to take down but the larger and quicker ones require much more effort.  Not to mention when they swarm or flank you it becomes incredibly challenging.

Much like in the previous Alan Wake game, the Taken, or the game’s evil spirits for lack of a better description, can also manipulate objects. Whether ripping off a large sign from a gas station or possessing a vehicle that comes flying towards you, you never know what is coming your way.

The combat system is fun, and for those of you who played the previous Alan Wake game will feel right at home.  American Nightmare features a quick little ‘play as you go’ tutorial which gives you hints to take your enemies down.  Light is a critical factor in the gameplay and becomes an integral part of your offence and defence.  Light can also heal you.  There are various lamp posts in the game and when you stand underneath them you are not only protected from the enemy but your health recharges.  Your flashlight becomes your primary weapon in the game.  Shining it on an enemy will weaken and slow them down.  I must say, getting some light directly on an enemy and blasting them with your shotgun is incredibly satisfying.  Shining your flashlight on one of those shadowy figures is simple and accomplished by merely pulling down on the left trigger.  Once they are sufficiently weakened, you have several options at your disposal to eliminate the enemy as you pick-up the various weapons in the game. 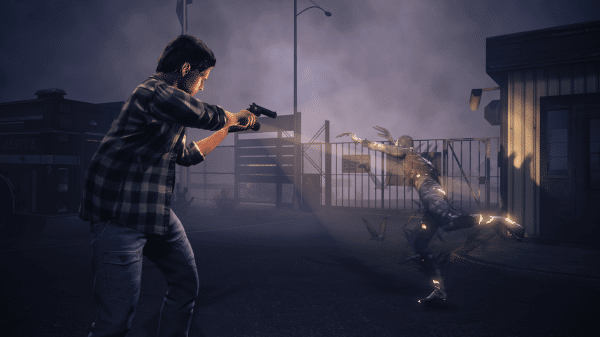 The only real issue I had with the game’s combat was the trademark Alan Wake cinematic dodges.  Dodging is accomplished in a Max Payne slo-mo-like fashion by hitting the left bumper and pressing in any direction.  Although great in theory, this function does not feel all that natural and is difficult to master.  Yet the more you progress in the game the more this function is necessary for your survival.  So taking the time to learn how to dodge and timing your dodges is something you will want to practice in the early going.

The entire single player campaign should only take you 5-7 hours to complete, and that all depends how much time you are willing to invest in searching for manuscript pages and then actually reading, or rather listening to them.  I did not have an issue with the length of the game, but I have to admit replaying certain areas grated me somewhat.  During the game Wake is trying to re-write history and that involves him replaying certain levels over again.  It just felt a bit repetitive during these segments.  It is this type of backtracking that often turns me off games.  Nevertheless, this is a $15.00 game so some backtracking is to be expected given the limitations of XBLA games.

In addition to the game’s main story mode, American Nightmare features a horde-like mode where you fight waves upon waves of enemies in a 10-minute span.  I found the mode enjoyable but it would have been far more entertaining if allowed a few others and me to take down hordes of enemies much like you can in Gears of War.

Visually, Alan Wake American Nightmare is fantastic.  Granted you do not get those gorgeous panoramic views of lush forests and mountain regions as you got in the original.  Night Springs is a smaller town that does not have much more than an observatory, drive-in movie theatre, rundown motel, gas station, and a few other buildings scattered about.  The scope and size of the previous game is not there; however, it is still a fairly big game with lots of areas to explore as you track down items and pages of the manuscript.  Where the game truly shines is in the presentation department.  Much like the previous Alan Wake game it is a cinematic experience creating the perfect mood. The whole “Twilight Zone” like experience is awesome. 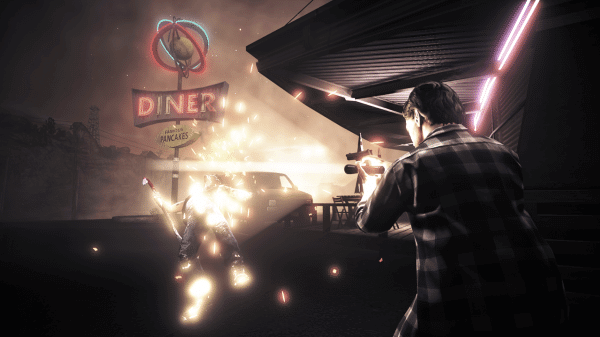 The lighting effects are also one of the game’s strong points.  Light is essential to your survival, so it comes as no surprise that so much attention was given to the game’s lighting and shadow effects. The way the light shines from your flashlight is incredibly life like.  Explosion effects and the games cut-scenes also manage to deliver a great visual experience.  I also found the games characters looked very good and almost appear more detailed than they were in 2010.  The Taken seem somewhat more menacing this time around and the characters Wake encounters have much more sex appeal this time around as well.

Technically speaking, Alan Wake American Nightmare was a bit of a mixed bag.  On a few occasions I noticed some really bad slowdown.  These instances occurred when there were many enemies on the screen at once or various large hunks of enviroment would come launching at me (e.g. large signs, vehicles, etc.).  These instances did not occur all that often but they were certainly enough to notice and it simply aggravated and threw me off at the time.

As with the visuals, the audio in American Nightmare is solid.  The game’s mellow and hypnotic music perfectly suits the game and gives it that unnerving and “never know what is around the corner” feeling.  There are even a couple of pop tracks that surface here and there.  As good as the game’s soundtrack is, the in-game sound effects are just as notable.  Just when the music is lulling you into a false sense of security all of the sudden a Taken equipped with an axe lunges out at you.  The dynamic music works very well in the game and it will certainly give you the jitters at times.  The voiceover work is nothing spectacular but it does the job.  The voice actors are believable and effectively convey the story; however some of the dialogue can fall flat and sound downright cheesy at times.  Overall I have no major concerns with the games total sound package and I am left with the opinion not much could have been done to significantly improve it.

When you consider the $15.00 price tag, Alan Wake’s American Nightmare is a solid purchase for not only  fans of the original, but also for those looking for a unique Xbox LIVE Arcade experience.  As it stands now, there is nothing like it on the Xbox LIVE Arcade and overall it is a very good game.  The combat is enjoyable, the varied enemies offer up a decent challenge, the visuals are slick, and the sound is solid.  That being said, the story can come across as a jumbled mess and the character development is simply not there.  At the end of the day American Nightmare was a great experience it is one that has me looking forward to perhaps a true sequel.