While this zen little escapist fantasy has been out on other platforms for several months, it’s new to the Nintendo Switch! Like an infinite amount of games that have come before it, Lonely Mountains: Downhill is a bite-sized game perfectly suited to a portable hybrid. Careening down mountain trails is something you can do for minutes or hours, the choice is yours. Although given how oddly soothing it is, maybe hours will be more your speed? The premise is dead simple, yet it had no problem keeping me hooked.

Not to overstate the simplicity, but you’re a cyclist? Going down a series of hills? Sometimes you crash, in a manner suggesting hospital trips and permanent damage. Once you successfully navigate a given trail, you’re then challenged to do so faster, and with fewer crashes. Continued progress unlocks more trails, more mountains, and more bikes. And that’s pretty much it, really. Yet, beneath this simple exterior is a truly satisfying gameplay loop. The game is short but sweet. Every trip down the trails feels terrific, full of sweet skids, rad jumps, and awful crashes. Maybe it’s due to the relative simplicity and size of LMD, but the core mechanic feels so good.

Every Turn a Triumph

I am, of course, referring to the cycling. There’s enough resistance, reaction, and regular feedback to make every path feel distinct, every action feel real. Is this anything like actually cycling down a treacherous mountain path? Not at all! But the game feel succeeds in taking you to that world with laser-guided precision. I’m not sure how, but the act of cycling downhill taps into some primal childhood fantasy. Something about exploring an untamed wilderness with a bike feels very much like a childhood dream explored in generous detail. 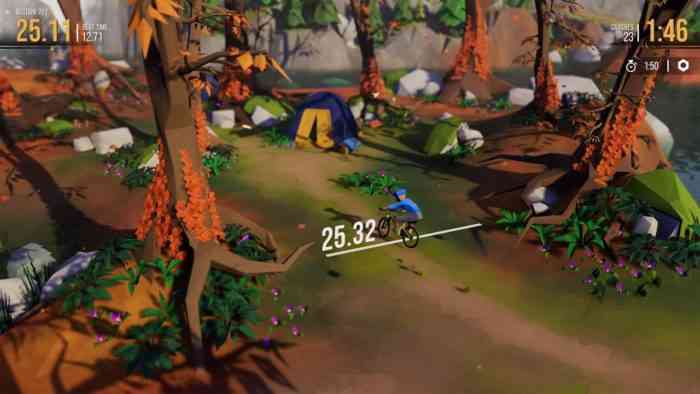 This coin’s other side is the cartoonish violence that comes with every mistake. Even an oversized jump will ground you, forcing you to make some quick calculations about distance and descent multiple times a run. You learn the limits in short order, giving rise to a breakneck dance between points of safety. Speaking of safety, the four mountains you can explore rapidly go from chill to chilling. Sierra Nevada is just a tower of bare rock and sheer cliffs. There were multiple points where no progress seemed possible, where every direction meant death. I eventually persevered, though not before painting many, many boulders with my pixelated blood.

Thankfully, progress through the game is tied to careful exploration, as opposed to speedy success. While I was able to conquer several stages in record time, it was always with a long trail of bodies in my wake. Unlocking new levels requires an opposite approach, which was a huge relief. Some stages are still next to impossible to complete with minimal crashes, but it’s a challenge I was happy to undertake. The downside being, that speed and accuracy are the only two metrics available for you to test yourself with.

That’s All There Is

‘Simple’ is the word I’ve used, or courted, almost a dozen times so far. While some people may see this as a form of elegance, others will be turned off by the lack of variety. And this is a legitimate problem! If you’re not excited by the prospect of biking down a hill quickly, accurately, or both of those ways, there’s literally nothing for you here. No shame in being basic, but that’s Lonely Mountains: Downhill in a nutshell. Lucky for me, that single core mechanic struck a deep chord somewhere in my psyche. Others may be horrified at the lack of options here. You’ve been well and fairly warned. That single mechanic is tweaked to perfection, but there really isn’t anything else.

There’s no shortage of weird little games on the Nintendo Switch. Whatever brief escape you’re seeking out, you’re certain to find it on this system. Cycling down a series of hills may not immediately catch your eye, but it should. Sometimes a single mechanic is a blessing, in that it inspires a narrow degree of perfection. On the other hand, there’s a very good chance this game just isn’t for you. But! On the off chance the confluence of bikes and bodily harm pings something deep in your guts, you won’t be disappointed. The controls, the game feel, and the level design all come together to bring you peace of mind in the strangest way. Let Lonely Mountains: Downhill take you away, and you’ll be deeply satisfied with the trip. 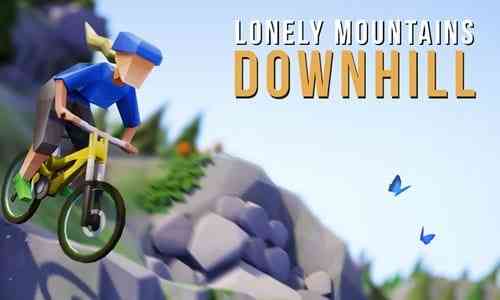 Beasties, Match 3 Adventure, Taming Switch Today
Next SnowRunner Review – Art Design Shines, While The Sound is Stuck in The Mud
Previous Predator: Hunting Grounds Review – No, You Have Lots of Time To Bleed