Trends come and go, but wait long enough and all trends recycle themselves. Just like skinny jeans and hipster glasses, trends in gaming rise and fall over time. Case in point – the point and click adventure game. Pioneered by Maniac Mansion and Monkey Island, the genre has surged back into the public eye with games like Resonance and 2012 Game of the Year contender The Walking Dead.

Another game that helped establish the genre is Leisure Suit Larry. Starring the awkward and somewhat obtuse Larry Laffer, the game followed his quest make a big splash with ladies of glamorous Lost Wages. 26 years later, Larry saddles up to make his HD return. Does lovable Larry Laffer retain his charm, or does he deserve a drink in the face? 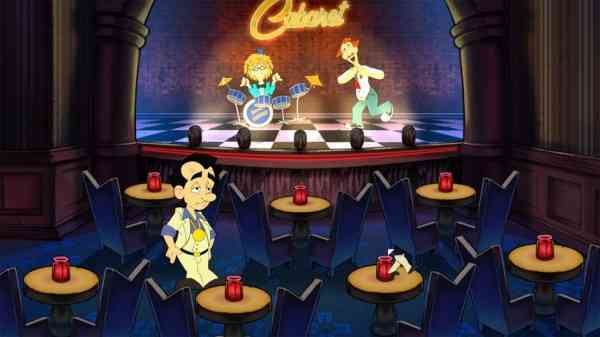 Larry arrives in Lost Wages with his trusty breath spray, an arsenal of offensive pickup lines, and his impressive, uh, stature. From there, it’s up to you to find women to woo. Usually, the object of Larry’s affection needs Larry to have completed a number of puzzles before she’ll even converse with him.  The problem is that these puzzles involve great deals of trial and error. Of course such things were commonplace in 1987, but very few modifications have been made to modernize the experience in Reloaded.

There are 5 locations in the game including a casino, a cornerstore, a club, a chapel and a skeezy dive bar. Each location in the game has several points to interact with, the implementation of which is questionable at best. The interface is awkward and ham handed, much like Larry’s interactions with women. Larry can look at, touch, talk to, and smell any of the points of interest in an environment, but the game requires you to switch your cursor each time, which is time consuming and clumsy. It fails to respond to your current situation as well – I can hardly count the number of times the narrator had to scold me for trying to talk to someone before looking at him or her. Sadly the process of methodically examining each piece of the environment is a practical necessity, as missing one tiny clue can lead to long periods of time wondering what you missed. Didn’t notice the diamond ring on the bathroom sink? You have to scour the game looking for it to progress.

Possibly more irksome is the game’s handling of money. Larry inevitably needs money to leave his mark on the city, and the only way to make money is by gambling, making long stints at the slot machine a requirement. I eventually took to saving after each spin, and reloading if I lost: if I hadn’t, I might still be waiting for a decent pay day. Travelling around is a problem too. Almost all travel requires using a taxi, forcing you to endure way too many clicks and bad jokes each time. Attempting to make the healthy/cost effective choice and walk to your destination results in Larry getting beaten to death by a back alley hoodlum. Fortunately there’s no penalty for death, so the only thing lost is your precious time and perhaps some of Larry’s dignity. 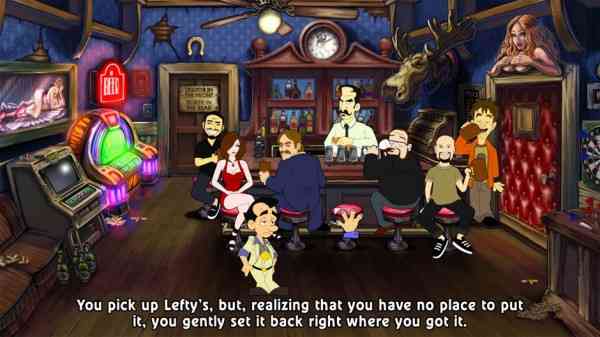 Thankfully there are some redeeming qualities to Reloaded. The narrator sounds like a seedy, immoral scumbag, and is perfectly suited to the dialogue in the game. There are a few chuckles to be had, but most of the ‘dirty’ jokes are better suited to groans and face palms than giggles. Lost Wages has also received a shiny coat of paint. The characters and animations are sharp and well done, and although the environments are nicely put together they are generally fixed. A bit of motion and extra life in the background would improve the feel of the game. It also feels like the developer ran out of time or money for animation, as characters are generally unfazed by many of the happenings around them, while Lefty the bartender is fully animated mixing drinks. It strikes me as odd that some animations are so well done, while others are seemingly non-existent.

Leisure Suit Larry: Reloaded is a rehash of the 1987 original. While it has been updated in some ways, the interface and content are firmly rooted in the 80’s. The jokes elicit groans, navigating the world is clumsy, and the presentation feels unfinished at times. While the developer has masked some of Larry’s flaws with breath mints, what he really needs is a hot shower and a fresh change of clothes. As a franchise Leisure Suit Larry could still be relevant, but it needs a major overhaul to woo gamers in 2013.