Being a kid, riding your bike with your friends — no school, no parents, just freedom and fun in the sun. Who wouldn’t be instantly attracted to the quaint, simple premise of Knights and Bikes, from developer Foam Sword? It’s a co-op adventure, with two protagonists setting off on their bikes to find treasure, solve a mystery and along the way learn about friendship, family, and life. The kid in all of us, no matter what our age, can relate.

Despite its youth-focused story and gameplay, Knights and Bikes feels like it is aimed at an adult gaming audience — players who might be familiar with old movies like The Goonies or even classic literary buddies Tom Sawyer and Huckleberry Finn … and who would also still remember physically riding a bike (do kids still do that?). I was also reminded of the relatively-recent Life is Strange: Before the Storm Bonus Episode, “Farewell,” with its treasure-hunting theme and nostalgic buddy gameplay. There’s also the throwback setting of 1980s Britain in a seaside Cornwall town called Penfurzy. Small, unassuming and done in a charming children’s book style, Knights and Bikes pulls you in with all the stress-free allure of a summer afternoon bike ride from your childhood.

The look is appealing, and cute, and is definitely one of the strong points of the game. Like Tearaway (the dev team is partly made up of former Media Molecule staff), Knights and Bikes looks like it was made of paper cutouts and markers, and imperfectly animated with a stop-motion feel, maybe by kids. And it is consistently a pleasure to look at with lots of color and energy and imagination. An entire, detailed bespoke world awaits exploration, built around a Hub system, with some moments of interaction with the characters of Penfurzy.

Protagonists Nessa and Demelza have their appeal as well. They’re inquisitive, mischievious and curious kids, and I found myself happy to ride around on their wide-eyed adventures, listening to their newfound friendship develop before my eyes. It’s a shame that the dialogue in cut-scenes wasn’t fully voiced though, which would have done a great deal more to bring them both to life. Developers Foam Sword do their level best, however, to at least inject the written dialogue with lots of sassy and snarky back-and-forth, which was amusing, even if it did lose some of its novelty as the game wore on.

Knights and Bikes is a cooperative game, fitting for a buddy-themed narrative, with Nessa and Demelza using their respective skills (and their ability to be in two places at once) to make their way through the map. You start off with one skill each — Demelza stomps the ground with her boots while Nessa throws a frisbee at targets — but the arsenal grows as you progress. I wouldn’t say I ever felt really challenged by any of the tasks or puzzles I faced; that includes combat, which started off one-dimensional and did not really change, sadly. You acquire new weapons, but strategy continues to involve simply using them in the straightforward and specific way that the game dictates. 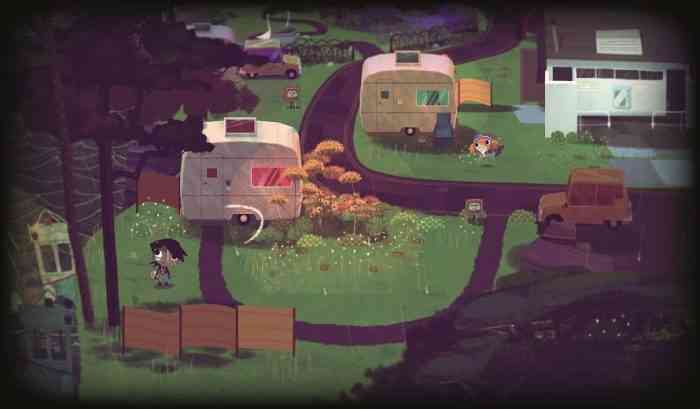 The lack of challenge is more pronounced if you play solo. You can play Knights and Bikes quite comfortably without a human helping you — in fact, playing solo is possibly easier because the AI is a very effective partner. I could have switched roles if I liked, and did both parts myself, but I never found that to be necessary as my AI companion worked so well. That makes for a nice, stress-free playing experience if that is what you’re looking for, but those who want to test their skills will be disappointed with Knights and Bikes.

Born to Be Mild

I found the simple combat and puzzles to be problematic because they are a great deal of what you do in Knights and Bikes. You can explore the town of Penfurzy if you like, but mostly you are engaged in the story and Nessa and Demelza’s adventure. I spent roughly 10 hours playing and it felt like a bit of a grind, especially in the later stages. There’s not enough variation in what you do to sustain your interest, and the lack of enemy variety only exacerbated that feeling. I found Nessa and Demelza’s personalities and their friendship to be quite engaging, though, and the desire to follow the story along and see what unfolded for them kept me playing and mostly enjoying myself, despite everything else.

I liked playing Knights and Bikes, but more for the look, the feel and the charming story than for the actual gameplay. It was hard not to like and begin to really care for Nessa and Demelza, who seemed to have all the many-faceted qualities of real kids. It had a nice soundtrack too. Knights and Bikes may not be an epic AAA game but it has some originality and fun to offer nonetheless. Strap on your helmet and take a relaxing ride with two quirky kids whose touching friendship will take you back to your own youthful innocence.

Against the Storm, Roguelike City-Builder, Coming Late 2022
Next NHL 20 Review – Lacing ‘Em Up For Another Season
Previous Fit for a King Review – Royal Retro Sandbox Sim