King Oddball Review- It’s Like Angry Birds Without The Frills

King Oddball is a mobile port just recently released for the Xbox One that is similar to Angry Birds, but is very simplistic. While the one button gameplay and unlockable game modes are what keep the game interesting, it becomes repetitive quickly without much difference in level design and has plain sounds and graphics.

King Oddball, named after the odd moon-like creature in the sky that you play as, has a very simple game premise. The overall objective of the game is to end the world by traveling across the world map, blowing up military infantry. Sounding great in practice, the game is a lot more about throwing rocks at infantry than it is about blowing them up, which is exponentially less exciting. The rocks are thrown from King Oddball’s pendulum tongue, relying on a mix of physics, strategy and luck to hit each of the infantry in the level. From helicopters and tanks, to little soldiers, every unit needs to be destroyed before the level is complete.

“Sounding great in practice, the game is a lot more about throwing rocks at infantry than it is about blowing them up, which is exponentially less exciting.”

King Oddball is a strictly single player game that requires you to move through nine quadrants of the world map, each with 16 tiles of their own, completing each of the levels that have a tank visible. Throughout the story there will be map tiles that unlock different game modes. These modes are essentially the same as the story but with a twist. From the Boom challenge, where your boulders are replaced by grenades, to the Hall of Diamonds, where one of your boulders is a diamond that can be earned if you complete the level without using it, these game modes offer a reprieve from the repetition of the story.

The way in which King Oddball is played with the reliance on physics, deflection strategy and luck is different than other games in the puzzle genre, certainly setting it apart from the likes of Angry Birds and Crush the Castle. The angles at which you hit the objects, can determine how or if you will hit any others. Now, although you may strategize when to let go of the boulders in order to hit objects a certain way or at a higher speed, these moves are often no more reliant on strategy than they are on luck. You may get a great triple hit with one boulder, only to miss the rest of the infantry with the other two rocks. Further to this, certain angles may give you different results, and ultimately, you spend your time crossing your fingers, hoping that you can pull off a lucky hit, or chain reaction. 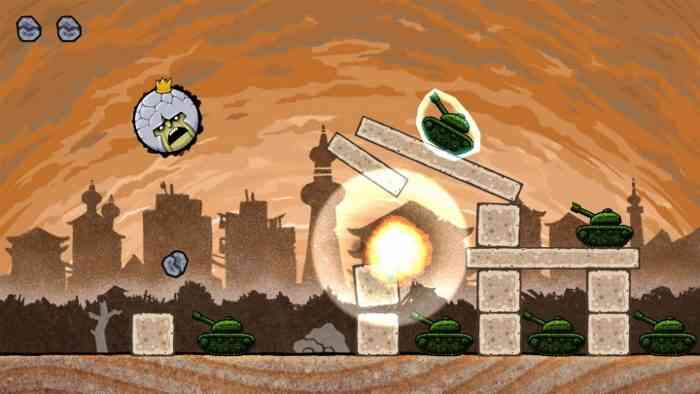 The one button design makes it very easy to play, while the strategy and luck add difficulty to King Oddball. There are such differences in difficulty that you can coast through a few levels only to get stuck on one that requires playing it multiple times. There is no denying that this can become quite frustrating, especially after completing levels previously on the first or second try. Along with these seemingly random waves of difficulty, the level design is poorly done, without much variety at all. As you make the slow journey from quadrant to quadrant on the world map, the level differences are limited to visible differences such as the colours of the sky, or the addition of ice, sand, bricks or stone.

Along with the limited visible differences in each quadrant, the tanks, helicopters and soldiers do not move or interact with you as you play as King Oddball, therefore keeping the game very simplistic without much depth. King Oddball is arguably so simplistic that the graphics look as if they are a poorly painted background and the music is just an annoyance after playing for a while.

Now, although King Oddball is repetitive and becomes frustrating with poor level design and the reliance on luck over strategy, there are a few redeeming factors including additional game modes, that actually make the game a decent value for the price. For less than $5, you can play an indie version of Angry Birds, with controls that are even more simple.