Journey of a Roach (PC) Review – No Really, You Play as a Cockroach

From publisher Daedalic Entertainment (best known for Torchlight and Return to Monkey Island) and developer Kobold Games (Happy Road To Death) comes Journey of a Roach, a point and click puzzle game for your PC. You join your roach friends Jim and Bud in a post apocalyptic world where there is nothing left on earth except for insects, or so we thought, until one day Jim discovers one lonely flower. Jim and Bob decide they need to get out of the bunker they are living in and see the world, but Bud isn’t exactly the most graceful of all cockroaches and ends up falling into a hole. You must take on the role of Jim in an effort to rescue your friend from whatever peril he may be in at bottom of said hole. Jim also doesn’t have the best of luck, encountering problems at every turn and having to help others in order to proceed. And so the journey begins for Jim and Bud to be reunited and eventually get out into the world.

The controls in the game are a bit of a mixed bag. Your four arrow buttons control your direction and your mouse is used to point and click. I found that sometimes the basic controls seem difficult. If you are standing in front of a puzzle item where you might be too close it gives you an outfit option on Jim. This was strange as you’ll hear a notorious no-no, and I have yet to accessorize him in any way. You have to be directly on top of what you are trying to pick up or combine with another object to fulfill this part of the story. 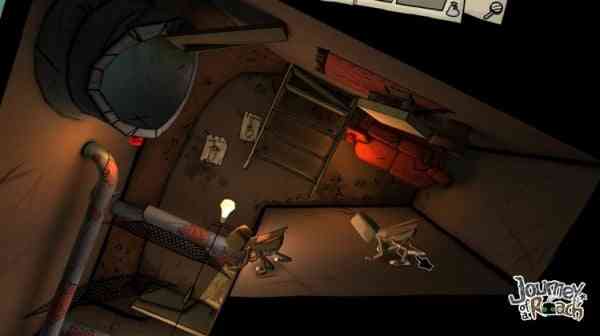 One of the best and worst parts of the game is that it is seen from Jim’s view point. On one hand, the camera will follow him around, so if you move from the floor up the wall to the ceiling, the camera will always keep him right side up so there is no confusion of directional arrows. On the other hand, the worst part of it is that it will always keep Jim right side up and at certain points you start to lose track of your surroundings. For example, in one part of the game you are in the air ducts and have to continually move back and forth between them to get from room to room. Well if you climb the wall of an air duct as the camera follows and there is no way to differentiate which way you came from or where you are going because all four sides of the duct are identical, so you usually end up right back where you had started from and make no headway. Also the spinning of the camera can sometimes make you a little bit nauseous at times, so those who are prone to motion sickness may want to be careful here.

An added bonus of the game is that during your quest time, and since the characters do not speak, there will be photos showing key points in the game, such as an ant stealing a map. You’ll assume that the map is what you should be searching for. So on that note, one part that I still have yet to figure out, since Journey of a Roach is a puzzle game, is why there is absolutely no hint or help feature? Sure there is a magnifying glass for you to use but it only gives you a map that is a generalized area of where you have been. You cannot zoom in on an area such as the air ducts that you will surely get lost in. I understand this isn’t a difficult puzzle game like Professor Layton but sometimes you get stuck and need a little nudge in the right direction. Well that won’t be happening here. Also, getting stuck on items that you can’t see can be a bit of a bother. Think you can’t go into that area? Well, it turns out your leg was touching a nail in the floor and that is exactly where you should be going. I found that after figuring out some of the puzzles there was indeed a sense of accomplishment.

Presentation wise, Journey of a Roach isn’t bad but it’s not great. The look of the game is very comic book like, with lighter shades of colors and shadowing adding to the full comic effect. The look of it isn’t too strenuous on the eyes, which is a good thing because when things get too bright it can be hard to find what you may be looking for to complete any quests. 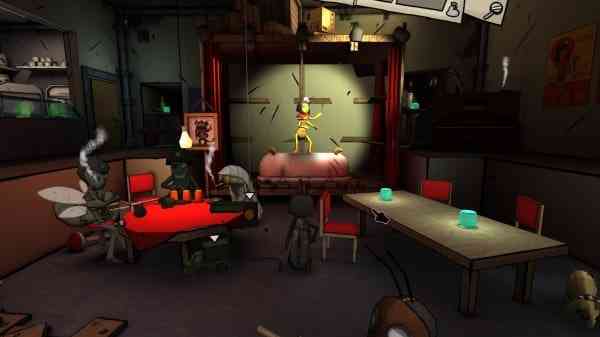 As for the sound, you’ll notice right in the beginning there is no dialogue present at all. Everything that you gather from the story is by facial expression, motion and some tiny noises that characters will make. For example, you’ll see a character whining while shaking their head to let you know that whatever is happening is a no-no. There is a mild soundtrack in the background that is just a continuous loop of the same track, but since the volume of it is quite low you never really notice it too much unless it is something you are listening for. Sadly sound effects are pretty dismal except for the sound of Jim’s feet, something breaking, or the click of a button pressed. The one thing that I personally would have liked seen included in the sound is different noise when picking up a piece of a puzzle for different objects as everything makes a paper sound when it’s added to your inventory.

To say I did not like the game would in fact be a lie. I actually had a great time with it (sans the air duct sections). Journey of a Roach is ideal for someone who wants a change of pace in a puzzle game. It is for someone who does not want a complex story line and is looking for an affordable puzzle game for your PC. At $14.99 you can’t lose choosing an indie title like this to add to your collection. Granted the camera issues and short play through was an issue but in the end Journey of a Roach is not a bad little title from Daedalic.