While Gran Turismo may have pioneered the sim-racing on consoles, the genre has come along way since the original GT debuted on the *gasp* original PlayStation. Ever since its main competition Forza entered the fray the GT series has seemed, to me, to be a step behind especially with its lengthy delays for it to appear in full and proper form on the PS3. With the next-gen upon us, and games like Forza 5 available, scoring GT6 has its difficulties. Comparisons are inevitable despite the cross-generational gap. Despite the PS4’s excellent sales numbers there is still massive install base of PS3’s out there. I don’t yet have a PS4 in my house (I will though when my wife isn’t looking) so it is nice to see the PS3 get support like this. For race fans who still use the PS3 as their primary gaming console you are not going to want to miss this one.

On the box, GT6’s vehicle and track “stats” immediately command your attention. The 1200+ cars advertised as included in the game are impressive, yes, but when you realize there are multiples upon multiples of certain car models that figure becomes far less substantial. Case in point, I counted no less than 33 variations of the Mazda Miata. Overkill? I think so. To a certain extent the same goes for the number of tracks included in GT6. The 70+ tracks are really just various configurations of a set of tracks totaling less than half that amount. Regardless, when compared to what a game like Forza 5 offers in this area the amount of tracks in GT6 is still impressive.

A staple of the GT series, license tests are nothing more than an annoyance for seasoned players. Especially the first ones (I didn’t play GT5 so I don’t know if there is any game save carry over that allows you to skip any of these), which cover such novice topics they are merely an annoyance. You cannot progress from one test to the next from the results screen. Instead you have to back out of each test to the menu screen, resulting in annoying load times that could have been avoided. Same for within race series. Just give me an option to head to the next race silly! 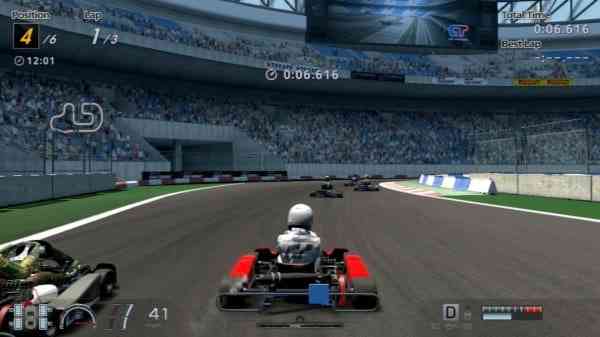 While GT6’s AI still is little more than a parade procession, the tracks are wide enough to allow for some excellent wheel-to-wheel racing, especially when you are playing with friends. Forza’s Drivatar system, while ambitious, can be a real source of frustration, especially on tight track. The suggested racing line, which you can turn off of course, seems to be the line the AI cars follow. If you race with the line on, daring to brake a little later or take a more aggressive line through a corner will reap rewards. Only when you do this do you begin to experience the unique characteristics of each car.

The career mode is laid out in a relatively linear fashion but it has enough flexibility to allow players to choose races in any sequence. New series become available as players earn the required number of stars. Objective-based bonus races are offered throughout the career mode and offer a nice change of pace from the standard race events. GT6 also has an arcade mode where players can quickly play a selection of cars on any of the game’s tracks. The sim-aspect appears geared down in arcade mode making it very accessible for those looking for a quick indulgence. Local and online multiplayer round out the game modes with multiplayer allowing up to 16 players to play together online via PSN.

The default control setting for GT6 uses the face buttons for throttle and brake instead of the DualShock 3’s triggers. You can reconfigure the controller to use the triggers if you like, but their rounded shape made playing with the face buttons more preferable for me. Given the placement of the left thumb stick, trying to use the triggers puts my grip in somewhat of an uncomfortable position. How the cars steer though feels, for the lack of a better term, delicious. I’ve criticized the dead zone of the PS3 controller’s thumb sticks on more than one occasion in the past but here they are tuned perfectly for the subtle inputs that can shave seconds off your lap times. The steering feel is really well done. Overall, I found the cars in GT6 simpler to drive compared to Forza 5. I can’t really put my finger on it for sure as to why but I will hazard a guess it is due to a simpler physics. 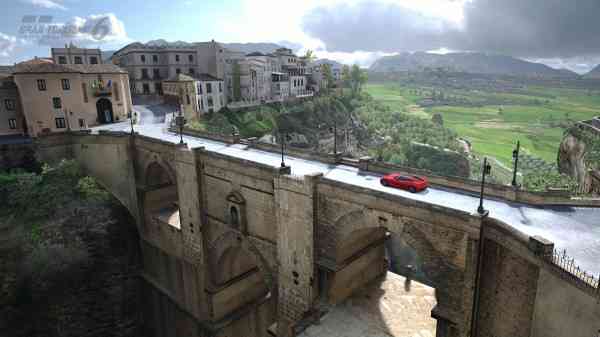 One area I feel is worth noting where GT6 falls short is its social integration. Social integration is popular these days. After experiencing how well Forza 5 integrates friends and challenges right into the races themselves I feel underwhelmed by what GT6 offers. While there are leaderboards, how they are integrated in to the game, very traditionally and not at all during gameplay, feels very behind the times no matter what generation of hardware the PS3 represents.

GT6 doesn’t hold a candle to what the next-gen can offer in terms of visuals but it’s still eye candy considering the platform and offers the promise of how damn good the GT series is going to look on PS4. Car models lack the details of their next-gen counterparts but still look really good. In fact they look almost too perfect with the way they shine and the reflections cast on them.  Oh, and we can’t forget that GT6 allows races with weather effects (e.g. rain) or at night.  This is something that Forza 5, a next-gen racer, is not doing, something that I just can’t understand in the next-gen world.

While driving the framerate runs at a solid and acceptable 30fps. There is some occasional fuzziness in some of the textures, almost like things are changing on the fly to preserve a solid framerate. This is especially evident when viewing replays. Replays are an area where other racing games could learn a thing or two from the GT series. The camera angles and perspectives are second to none. I find replays in other games (I’m looking at you Forza) focus too closely on your own car while GT6’s wider field of view offers a much better perspective of the actual racing and is far more entertaining to watch. 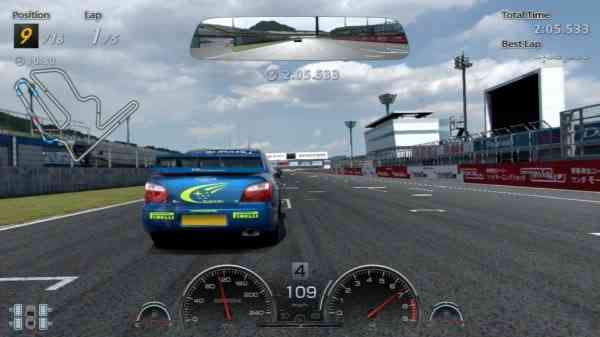 GT6 also features a wonderful sense of speed once you progress to the games quicker cars. The best view to play from is the default “gauge” view. While in car cams are en vogue these days (and available if you want to play from that viewpoint) the gauge view offers the best combination of frame rate, sense of speed and precision of control.

The menu music is a cross between lounge-y tracks or a bad rip off of the Top Gun guitar theme. In game though the soundtrack definitely improves with various artists and genres represented but I generally turn that down or right off so I can fully immerse myself in the gameplay sounds.  The cars themselves sound fine but the environmental effects I found to be a bit muted. Collisions with other cars, no matter the speed, sound blunt and this sort of makes the cars sound unbreakable. Tires still squeal in protest when pushed beyond their limits of adherence but represent the lack the attention to detail you now hear in GT6’s main competition.

I realize the frequent comparisons to Forza 5 may be viewed as a bit of an unfair comparison, but they’re offered as a point of reference. Hardcore racing game enthusiasts looking for the most realistic driving experience on consoles will definitely want to investigate what Forza 5 offers; however, those still with PS3’s (and there’s plenty of you) are in for a treat. GT6 offers a roster of cars that borders on overkill, a wide variety of tracks and tried and solid gameplay. Despite some minor flaws it is simply the best racing experience available on the PS3.

This review has been edited from its original thanks to feedback from our alert readers. Thank you.

Next UFO Dad (PS Vita) Review – An Unexpectedly Addicting, but Somewhat Average, ‘Match Three’ Platformer
Previous Journey of a Roach (PC) Review – No Really, You Play as a Cockroach