January saw the first great horror game of the year as Resident Evil 7: biohazard showed that one of the genre’s oldest franchises still had some new tricks up its sleeves. While Capcom’s title wasn’t without its flaws, there’s no denying that it can be downright terrifying at times (especially in virtual reality). Sadly, not every horror game can deliver that same kind of thrill, and Joe’s Diner is an example of a game that doesn’t provide much of anything.

The premise behind the game is a horror trope that should be familiar to gamers, as the player is placed in the shoes of a new employee who is starting a job at a haunted location. In this case, it’s the titular diner, one that just happens to be built on top of a Native American cemetery. Shockingly, this form of disrespect doesn’t play with the spirits there that come in the form of two chieftains named Grim Feather and Laughing Bird.

These two ghosts play a central role in Joe’s Diner, as Laughing Bird constantly tries to cause a ruckus by turning on various items (such as a jukebox or fax machine). If the player doesn’t turn off the various items in time, then they are greeted by a poorly done jump scare as a picture of Grim Feather appears before it transitions into a “game over” screen. It’s not scary nor particularly effective, but it does provide a fail state for players to avoid.

“Nothing is redeeming about Joe’s Diner. It’s a poor execution of a dull idea and one of the worst games released on PlayStation 4.”

There’s really not much to the actual gameplay, as I just walked around a passable looking diner looking for any leftover food to throw away since that’s the other condition players have to fulfill in order to pass a stage. Occasionally Laughing Bird would turn on an object, and I’d have to look around trying to figure out what was making the noise. Some of the noises are easy to point out like the sizzling stove or ringing telephone, but others were nondescript enough that I was interacting with random items until I found the right one. The game really could’ve done a better job of having visual indicators for objects that are activated (a few do, but not all of them), which makes the game pretty much unplayable for those that have difficulty hearing.

My first couple runs all ended up with me staring at the game over screen since I didn’t realize that I could open some of the doors in the diner. This is due to the controls being very finicky, and the player has to line up the door handle with the very center of the screen. That wouldn’t be too much of a hassle if there was a reticle, but there isn’t. After I figured out that I could open the doors, the problem was mostly moot, but I did have to struggle more than I should over such a simple interaction. 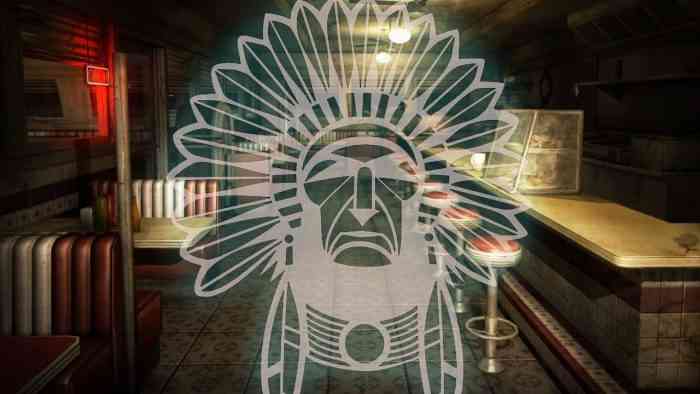 Overall, there are 30 night shifts to work at Joe’s Diner, although I’m not sure why the employee would come back after the first night. As the game progresses, distractions happen at a faster pace, but I was still ultimately performing one boring fetch quest. There’s nothing satisfying about turning off a jukebox, and I never had a single moment of fun while playing the game.

I’m really not sure what the appeal for Joe’s Diner is if there even is any. I was just tasked with doing menial tasks over and over, in order to not wake up an angry spirit. It’s not enjoyable, and the most satisfaction I had while playing was when I decided to close the application on my PlayStation 4.

Most of the time when I’m playing a bad game I can still find some positives about the experience. Maybe some good ideas just weren’t executed well, or there’s an interesting story that is burdened by sub-par gameplay. Nothing is redeeming about Joe’s Diner, though, as it’s a poor execution of a dull idea. It’s one of the worst games released on PlayStation 4, but even then it’s not an interesting enough of a disaster to check out.