The indie scene has been filled to the brim with puzzle games for quite some time, with some of my all-time favorite games among them. The creative freedom offered by game development without the influence of publishers has allowed a handful of developers to take risks that have resulted in the production of artistic masterpieces. However, the freedom of indie has also allowed for a large number of artsy games with poor gameplay quality. Among the latter group lies Iris.Fall, a game by NEXT Studios.

In Iris.Fall, you play as a young girl who finds herself chasing a black cat through a (primarily) grayscale world with a weird Victorian automata motif, using magic shadow projection powers and solving puzzles to reach the otherwise inaccessible areas to which the cat has escaped. Being perfectly honest, I’m not entirely sure why you’re chasing the cat. It’s never really established, and this girl winds up really far away. The areas she does traverse are somewhat interesting, for a while, but mostly because I was led to wonder who had the enormous amount of funding necessary to construct these massive mechanical puppet setups. Setups, mind you, that are supposed to be creepy. Unfortunately, the game, for all its trying, doesn’t do particularly well creating its desired ominous tone. The lack of color, the skeletal metal innards of the puppets, the steady hinting at the game’s final revelation—none of it was able to really give me the chills. Maybe it’s the puzzles, maybe it’s the movement, or maybe it’s the total lack of danger in the game. I think it’s all of the above.

The first thing about the game that made me think, “Oh, this is gonna take a while,” wasn’t the difficulty of the puzzles: it was the snail’s pace at which the protagonist jogs. Admittedly, the girl did crawl out of bed to chase this cat (she rubs her eyes if you stand around for too long) but maybe she shouldn’t be chasing a cat if she doesn’t have the energy to run. That’s not the only issue with the movement, though. See, the protagonist’s movement takes the instruction of the W, A, S, and D keys input very literally. Unfortunately for us, the narrow walkways, hallways, and other “ways” often don’t line up perfectly with these directions, so you end up typing SDSDSDSDSD to walk down a straight pathway (in this instance, walking toward the player and to the right). If you want to avoid the troubles, I highly recommend playing with a controller instead. Fortunately, these issues don’t appear when you become a shadow. 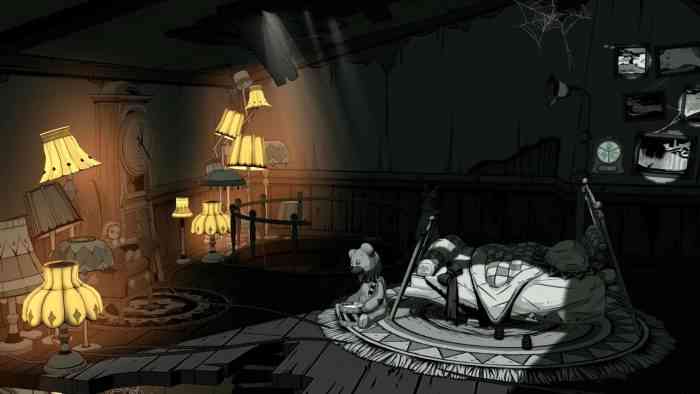 The game’s pride and joy lies in its “spellbinding theme of ‘light and shadow.’” The theme primarily manifests itself in the player’s ability to, at very specific points, control the protagonist’s shadow and traverse obstacles whose shadows line up conveniently enough for the girl to walk over them. These segments are usually very brief, railroading you directly in whichever singular direction the shadows allow (freedom be damned), and are usually used as the mechanism for completing a puzzle in order to reach the next area.

The puzzles are exceedingly plain. Most of them don’t correspond to any logical solution a normal person might conjure up to traverse an obstacle, which leaves you with little feeling of accomplishment (it’s a bit difficult to feel responsible for solving a puzzle where you don’t understand how your solution changed anything). There are dots over any interactable objects in the vicinity, which makes it painfully obvious how to solve most of the puzzles. There were a few legitimately difficult puzzles, some of which even made great use of the shadow mechanic, but those were painfully scarce and were as slow as the rest of the game. More time will be spent acting on your solutions to the puzzles than on actually coming up with those solutions. The puzzles do, at the very least, consistently tie into the game’s themes.

These themes serve to give the game an almost-ominous tone. Dolls, mechanical puppets, etc., serve to inform the player of what the game wants them to feel, but don’t deliver quite as strongly as they should. The reveals of new information throughout the story is too steady, with each reveal offering a small amount of information, making them feel less revelatory and more informative–like filling in the gaps rather than offering something wholly new. Even the ending revelation—no spoilers, don’t worry—which is supposed to be a surprise, is abundantly clear to the player by the time they reach the end.
ipt>

So that’s Iris.Fall. It’s beautiful, it has great music, it shows promise in its themes, but that’s about it. The game is frustratingly lacking in polish and originality, with things as critical as movement falling sub-par. I should say that, if you’re patient, not especially critical, and you’re desperate for a pretty puzzle game to play for a few hours (it took me about three hours to finish), Iris.Fall will not hurt you to play. Just don’t go in expecting a gem. As I said, it’s unpolished at best.